“Gail, Please! Stick your hand in it!”
The petite Eskimo-Chugach woman gave me that you-dumb-ass-white-boy look.
“Gail, Gail. STICK YOUR GOODDAMN HAND IN IT!”
She stuck it in, under the gravel of the beach at Sleepy Bay, her village’s fishing ground. Gail’s hand came up dripping with black, sickening goo. It could make you vomit. Oil from the Exxon Valdez. 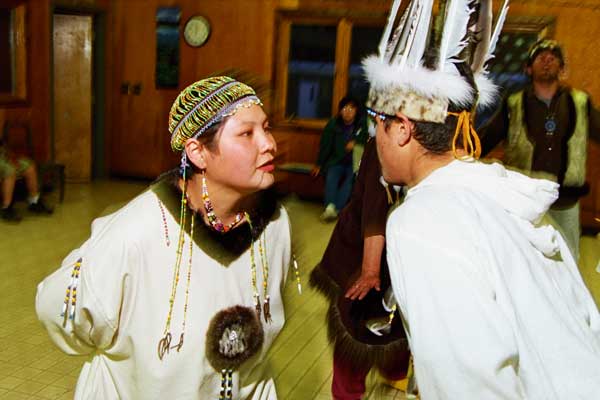 It was already two years after the spill and Exxon had crowed that Mother Nature had happily cleaned up their stinking oil mess for them. It was a lie. But the media wouldn’t question the bald-faced bullshit. And who the hell was going to investigate Exxon’s claim way out in some godforsaken Native village in the Prince William Sound?
So I convinced the Natives to fly the lazy-ass reporters out to Sleepy Bay on rented float planes to see the oil that Exxon said wasn’t there.
The reporters looked, but didn’t see it, because it was three inches under their feet, under the shingle rock of the icy beach. Gail pulled out her hand and now the whole place smelled like a gas station. The network crews wanted to puke. And now, with their eyes open, they saw the oil, the vile feces-colored smear across the glaciated ridge faces, the poisonous “bathtub ring” that ran for miles and miles at the high tide level.
And it’s still there. Less for sure. But thirty years later. IT’S STILL THERE, GODDAMNIT. And I want YOU, dear reader, to stick your hand in it. I want YOU, President Trump, to stick your hand in it before you blithely fulfill your Palin-esque campaign promise for a little more offshore drilling. 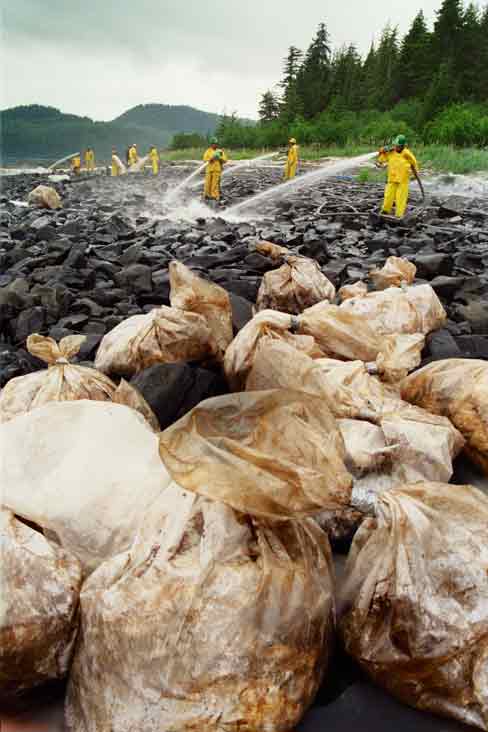 Oil still being cleaned up seven years after the spill

It also marks the 30th Anniversary of a lie. Lots of lies: catalogued in a four-volume investigation of the disaster; four volumes you’ll never see. I wrote that report, with my team of investigators working with the Natives preparing fraud and racketeering charges against Exxon. You’ll never see the report because Exxon lawyers threatened the Natives, “Mention the f-word [fraud] and you’ll never get a dime” of compensation to clean up the villages. The Natives agreed to drop the fraud charge — and Exxon stiffed them on the money. You’re surprised, right?

* * * * *
Doubtless, for the 30th Anniversary of the Great Spill, the media will schlep out that old story that the tanker ran aground because its captain was drunk at the wheel. Bullshit.
Yes, the captain was “three sheets to the wind” — but sleeping it off below-decks. The ship was in the hands of the third mate who was driving blind. That is, the Exxon Valdez’ Raycas radar system was turned off; turned off because it was busted and had been busted since its maiden voyage. Exxon didn’t want to spend the cash to fix it. So the man at the helm, electronically blindfolded, drove it up onto the reef.
So why the story of the drunken skipper? Because it lets Exxon off the hook: Calling it a case of “drunk driving” turns the disaster into a case of human error, not corporate penny-pinching greed. 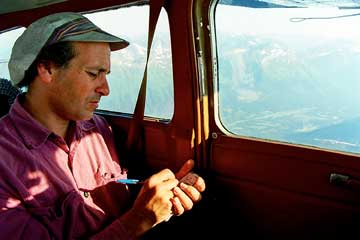 Indeed, the “human error” tale was the hook used by the Bush-stacked Supreme Court to slash the punitive damages awarded against Exxon by 90%, from $5 billion, to half a billion for 30,000 Natives and fishermen. Chief Justice John Roberts erased almost all of the payment due with the la-dee-dah comment, “What more can a corporation do?”
Well, here’s what they could have done: Besides fix the radar, Exxon could have set out equipment to contain the spill. Containing a spill is actually quite simple. Stick a rubber skirt around the oil slick and suck it back up. The law requires it and Exxon promised it.
So, when the tanker hit, where was the rubber skirt and where was the sucker? Answer: The rubber skirt, called “boom” — was a fiction. Exxon promised to have it sitting right there near the Native village at Bligh Reef. The oil company fulfilled that promise the cheap way: they lied.
And the lie was engineered at the very top. After the spill, we got our hands on a series of memos describing a secret meeting of chief executives of Exxon and its oil company partners, including ARCO, a unit of British Petroleum. In a meeting of these oil chieftains held in April 1988, ten months before the spill, Exxon rejected a plea from T.L. Polasek, the Vice-President of its Alaska shipping operations, to provide the oil spill containment equipment required by law. Polasek warned the CEOs it was “not possible” to contain a spill in the mid-Sound without the emergency set-up. 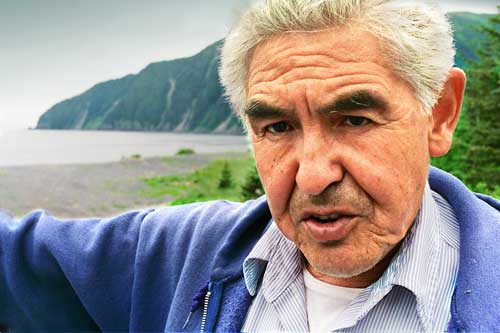 Alaska Native Henry Makarka: “If I had a machine gun, I kill those white sons-of-bitches.”

Exxon angrily vetoed ARCO’s suggestion that the oil companies supply the rubber skirts and other materiel that would have prevented the spill from spreading, virtually eliminating the spill’s damage.
Regulations state that no tanker may leave the Alaska port of Valdez without the “sucker” equipment, called a “containment barge,” at the ready. Exxon signed off on the barge’s readiness. But, that night thirty years ago, the barge was in dry-dock with its pumps locked up under arctic ice. By the time it arrived at the tanker, half a day after the spill, the oil was well along its thousand-mile killing path.
Natives watched as the now-unstoppable oil overwhelmed their islands. Eyak Native elder Henry Makarka saw an otter rip out its own eyes burning from oil residue. Henry, pointing down a waterside dead-zone, told me, in a mix of Alutiiq and English, “If I had a machine gun, I’d shoot every one of those white sons-of-bitches.”

* * * * *
Exxon promised — promised — to pay the Natives and other fishermen for all their losses. The Chief of the Natives at Nanwalek lost his boat to bankruptcy. His village, like other villages, Native and non-Native, decayed into alcoholism. The Mayor of fishing port Cordova killed himself, citing Exxon in his suicide note. 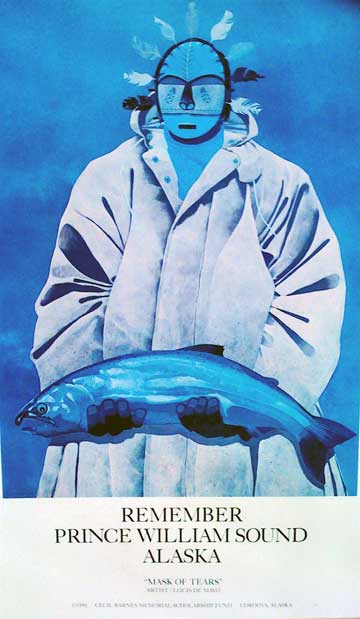 On the island village of Chenega, Gail Evanoff’s uncle Paul Kompkoff was hungry. Until the spill, he had lived on seal meat, razor clams and salmon Chenegans would catch, and on deer they hunted. The clams and salmon were declared deadly and the deer, not able to read the government warning signs, ate the poisoned vegetation and died.
The President of Exxon, Lee Raymond, helicoptered into Chenega for a photo op. He promised to compensate the Natives and all fishermen for their losses, and Exxon would thoroughly clean the beaches.
Uncle Paul told the Exxon chief of his hunger. The oil company, sensing PR disaster, shipped in seal meat to the isolated village. The cans were marked, “NOT FIT FOR HUMAN CONSUMPTION.” Uncle Paul said, “Zoo food.”
Paul didn’t want a seal in a can. He wanted a boat to go fishing, to bring the village back to life.
Two years after the spill, Otto Harrison, General Manager of Exxon USA, told Evanoff and me to forget about a fishing boat for Uncle Paul. Exxon was immortal and Natives were not. The company would litigate for 20 years.
They did. Two decades on, Exxon finally began its payout of the court award — but only ten cents on the dollar. And Uncle Paul’s boat? No matter. Paul had died — as had a third of the fishermen owed the money.
* * * * *
Lee Raymond, President of Exxon at the time of the spill — and its President when the company made the secret decision to do without oil spill equipment, retired in April 2006. The company awarded him a $400 million retirement bonus, more than double the bonuses received by all AIG executives combined.
* * * * *
Gail’s oily hand never made it to national television. The networks were distracted with another oil story.
After sailing back to Chenega from Sleepy Bay, I sat with Uncle Paul, watching the smart bombs explode over Baghdad. Gulf War I had begun.
Uncle Paul was silent a long time The generals on CNN pointed to the burning oil fields near Basra. Paul said, “I guess we’re all some kind of Native now.”