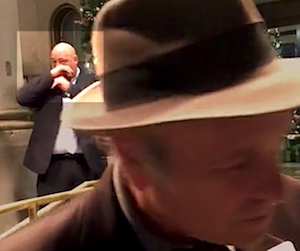 Progressives should not be cheerleaders for the FBI when it shaves the truth, even if the bureau is now portrayed as Donald Trump’s enemy. This is, after all, the FBI infamous for the wiretap of Martin Luther King Jr., the broader COINTELPRO operation, and, recently, smearing antiwar and environmental activists with claims of Russian influence.
Like it or not, that creepy little GOP shill Rep. Devin Nunes is stating a fact when he writes that FBI agents failed to tell the Foreign Intelligence Surveillance Act (FISA) court that the file it used to justify spying on a US citizen, the “Steele dossier,” was paid for in part by Hillary Clinton’s campaign.
True, the FBI dropped a footnote about the source coming from a “political entity,” a fuzzy cover-our-ass comment that failed to state known partisan bias. But failure to tell the court the whole truth and nothing but the truth is perjury.
Ironically, Nunes himself commits the same perjury by failing to name the original creator of the report. Before Clinton paid for a copy, the file was already written for a news front sponsored by a Republican billionaire named Paul Singer.
Singer, the court should have been told, has a long history of creating what former FBI Director James Comey himself called “salacious and unverifiable” files on his enemies.
I know something about this history, because Singer created a file on me. He also created files on elected officials worldwide who got in the way of his next billion. The files consisted of poisonous garbage but really effective, deadly garbage.
In 2011, I flew to the Congo and discovered that Singer had seized the funds meant to end a cholera epidemic, which I reported at the top of the BBC news and on the front page of the Guardian.
To spike the story, Singer’s PR flunky called my BBC “Newsnight” producer and said, “We have a file on Greg Palast.” Apparently, it contained the kind of salacious garbage peddled by Steele. The BBC was un-moved, saying, it seems that “Palast has a file on you.”

The BBC pressed Singer’s flak to turn over the actual dossier. They backed down after admitting it contained old fabricated smears that had been long discredited. (In fact, a US power company had to write me a fat check in punishment for the libel.)
So when I hear that some Trump toady is slimed by a Singer file, I don’t clap with joy.
Singer has used secret, poisoned dossiers slipped to media outlets to destroy the reputations of elected officials from Argentina to the Congo all to make another billion.
Indeed, his PR flak boasted how he planted stories about the president of the Republic of Congo with the pliant Washington Post. It was part of Singer’s campaign to seize $400 million from the Congo to pay off interest and penalties on ancient debts of the war-ravaged nation that Singer had picked up for just $10 million.
Singer has seized millions in Congo assets funds that were made available to the Congo by US and European taxpayers to help the Congo clean its water supply and end a cholera epidemic.
The Singer-funded groups in Argentina that smeared former President Cristina Kirchner with allegations of murder, all to get her removed from office. It worked. Despite large public protests, the new president, Mauricio Macri, in his first days in office, paid Singer the billions of dollars Kirchner had refused.
Singer a top funder of Marco Rubio’s candidacy against Trump and leader of the “Never Trump” campaign then decided to use the tricks that succeeded in other countries on our nation.
Let me be clear: Despite Nunes’ assertions, nothing in his memo none of this FBI misconduct, however unacceptable undermines Special Counsel Robert Mueller’s investigation of Trump and gang.
Still, I cannot applaud billionaires bending our elections, manipulating wittingly or unwittingly the FBI.
And I cannot believe my fellow progressives are also cheering the FISA court, the very agency Edward Snowden courageously exposed as the judicial inquisitors blessing an ugly police spy state.
Just one of the thousands of FISA court spy authorizations revealed by Snowden permitted the National Security Agency to get every single phone call made by Verizon callers, and similar demands were approved to seize the records of every major phone carrier.
The ACLU has been in legal combat with the FISA court over “mass, warrantless surveillance of Americans,” allowing use of “Network Investigative Techniques” (i.e. malware), and information collected under the law without a warrant that could be “used to disproportionately target disfavored groups, whether minority communities, political activists, or even journalists.”
So I ask you what Snowden asks: When you’ve crossed the wrong billionaire, when they come for you, will they quote your own words in praise of the Gestapo Lite?
Copyright, Truthout. May not be reprinted without permission.
* * * * *
Greg Palast has written four New York Times bestsellers, including Armed Madhouse, Billionaires & Ballot Bandits, and The Best Democracy Money Can Buy, now a major non-fiction movie, available on Amazon and can be streamed for FREE by Prime members!
Stay informed, get the signed DVD of the updated, post-election edition of The Best Democracy Money Can Buy: The Case of The Stolen Election, a signed copy of the companion book or better still, get the Book & DVD combo.
Support The Palast Investigative Fund  and keep our work alive!  Become a monthly contributor and automatically receive Palast’s new films and books when they’re released!
Or support us by shopping with Amazon Smile. AmazonSmile will donate 0.5% of your purchases to the Sustainable Markets Foundation for the benefit of The Palast Investigative Fund and you get a tax-deduction! More info .
Subscribe to Palast’s Newsletter or his separate list for Poems & Stories.
Follow Palast on Facebook, Instagram, and Twitter.
GregPalast.com