Watch the preview of the first of our series of film reports, The Purged: The Vanishing Voters of Trump’s America.

In 2018, the Palast investigations team uncovered 340,134 voters illegally removed from Georgia’s voter rolls by Secretary of State Brian Kemp while he was running for Governor against Stacey Abrams.

That was Kemp’s secretive “cleansing” operation that won him the election over Abrams, the first black woman in American history to run for governor.

Abrams often cites the illegal purge we uncovered. And now, she’s taking action. Her new group, Fair Fight, has hired the Palast team to update and expand our work to put before a court to overturn what we have dubbed, Georgia’s “Purge by Postcard.”

While the Palast Investigative Fund is thrilled with this new alliance, it only covers Georgia. We need to expose new, massive, illegal purges in Ohio, Michigan, North Carolina, Florida, Kentucky, Wisconsin, Nevada and other states. We’ve already filed preliminary legal actions in 20 states. Now we move to the expensive process of detailed computer analysis of each purge, voter by voter, more than a quarter million in each of these states.

I’ll be blunt: We need funding to stop these purges.

Our discovery and analysis of the purge list was the culmination of our six-year investigation which involved inventive undercover work, hiring a team of Silicon Valley’s top database specialists and filing our own federal law suit against Kemp.

Because Abrams’ new group is strictly non-partisan and dedicated to voting rights, the Palast investigative Fund has released to her our huge computer files and proprietary algorithms. Our chief database specialist, John Lenser, will act as the expert witness in Abrams’ lawsuit to prevent new purges in Georgia.

How refreshing. I’ve been exposing Jim Crow vote trickery for 20 years — in award-winning reports for The Guardian, Rolling Stone and Salon. But this will be the first time an official, intent on justice, has taken my evidence into a courtroom.

But we’re far from done. The “purge by postcard” scam was launched by a Supreme Court decision just last June. Since then, it’s been used with a vengeance to bleach the voter rolls whiter than white in at least 20 States, most GOP controlled.

Our lawyers have already forced a dozen purge lists from the hands of these “Purge’n Generals” – Secretaries of State totaling over 3 million voters.

Experts Lenser and Mark Swedlund are donating their time as have our dozen attorneys including Jeanne Mirer in New York, Prof. Robert Fitrakis In Ohio, Gary Flowers in Virginia. 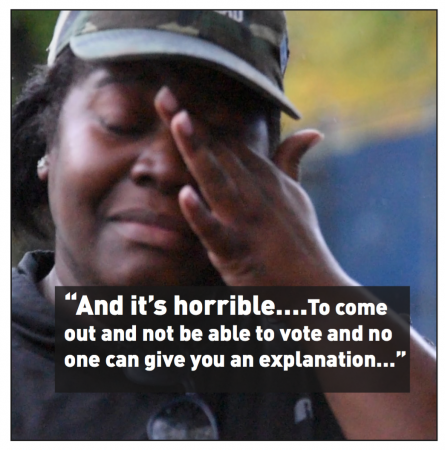 And we never forget our journalistic purpose: exposing the trickery, cons, and ballot box blockades that go under the rubric “vote suppression.“

Not only do we get the inside, confidential documents; we bring the story to life with our unique ability to find and tell the stories of the victims. Stacey Abrams often refers to Christine Jordan, Martin Luther King‘s 92-year-old cousin, whom we filmed just as she was booted from the polling station in Atlanta. While 340,134 is a number, Miss Jordan is its human face.

We need to bring the sheer numbers and the victims of this massive new purge operation to the public in 2020 before the next election is stolen again.

We are finishing the first of our series of film reports, The Purged: The Vanishing Voters of Trump’s America. The first centers on our multi-year investigation of Georgia’s Jim Crow operation that defeated Stacey Abrams…and was the test run for the latest massive voter purge game that, if adopted by other states, can “re-elect” Trump.

We have partnered with a major, prestigious media outlet to carry these reports on film and in print, throughout 2020. (Watch for our announcement.)

Through our 2013-2016 work, we first exposed and helped demolish Kris Kobach’s Interstate Crosscheck system—with articles in Rolling Stone and on Democracy Now! and especially via our film, The Best Democracy Money Can Buy, shown umpteen times by The League of Women Voters and Rev. Jesse Jackson.

Or give any amount no matter how large or small.

Pass this on to anyone you think gives a damn about the upcoming burglary of the ballot box.
I’m counting on you when everything is on the line.