What’s the solution for the endless electricity disasters from Louisiana to California? 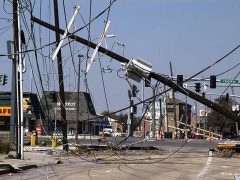 As I and other experts hired by the city of New Orleans told the politicians, put Entergy out of business. Create a publicly owned system that wouldn’t have wires that the Big Bad Wolf could blow down.

But Entergy had too much political juice, including a lawyer named Hillary Rodham. (Entergy also ran the Louisiana campaign of Bill Clinton‘s opponent, Bob Dole. Why be on a horse when you can on the whole damn race track.)

It’s been done. The public took over the tinker-toy power system of Long Island after 3 million people were left in the dark by hurricane Gloria. Rates went down and reliability went way up as the publicly owned system laid new underground cable.

After 180 Californians were burnt to death in fires caused by Arson-R-Us PG&E, San Francisco and San Jose tried to take over the system, but were blocked by a Governor whose name I do not recall.