For Truthout.org
May 5, 2010
I‘ve seen this movie before. In 1989, I was a fraud investigator hired to dig into the cause of the Exxon Valdez disaster. Despite Exxon’s name on that boat, I found the party most to blame for the destruction was … British Petroleum. That’s important to know, because the way BP caused devastation in Alaska is exactly the way BP is now sliming the entire Gulf Coast. 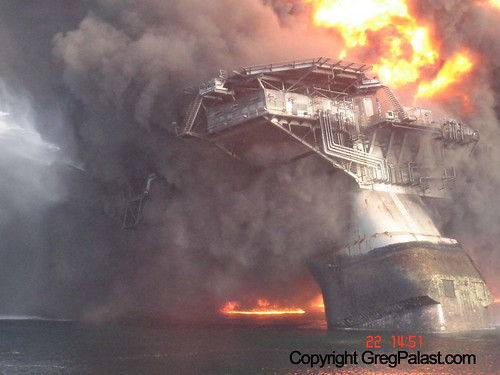 Deepwater Horizon in flames before sinking. Photo provided by D.Becnel

Tankers run aground, wells blow out, pipes burst. It shouldn’t happen but it does. And when it does, the name of the game is containment. Both in Alaska, when the Exxon Valdez grounded, and in the Gulf over a week ago, when the Deepwater Horizon platform blew, it was British Petroleum that was charged with carrying out the Oil Spill Response Plans (“OSRP”) which the company itself drafted and filed with the government.
What’s so insane, when I look over that sickening slick moving toward the Delta, is that containing spilled oil is really quite simple and easy. And from my investigation, BP has figured out a very low cost way to prepare for this task: BP lies. BP prevaricates, BP fabricates and BP obfuscates.
That’s because responding to a spill may be easy and simple, but not at all cheap. And BP is cheap. Deadly cheap.
To contain a spill, the main thing you need is a lot of rubber, long skirts of it called “boom.” Quickly surround a spill or leak or burst, then pump it out into skimmers or disperse it, sink it or burn it. Simple.

But there’s one thing about the rubber skirts: you’ve got to have lots of it at the ready, with crews on standby in helicopters and on containment barges ready to roll. They have to be in place round the clock, all the time, just like a fire department; even when all is operating A-OK. Because rapid response is the key. In Alaska, that was BP’s job, as principal owner of the pipeline consortium Alyeska. It is, as well, BP’s job in the Gulf, as principal lessee of the deepwater oil concession. 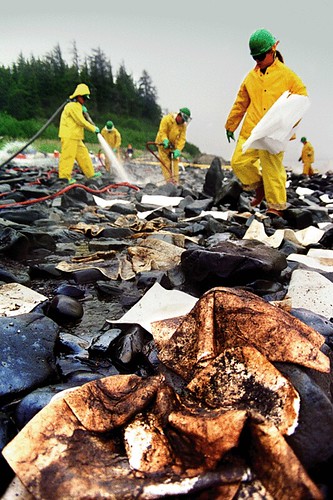 Before the Exxon Valdez grounding, BP’s Alyeska group claimed it had these full-time oil spill response crews. Alyeska had hired Alaskan Natives, trained them to drop from helicopters into the freezing water and set boom in case of emergency. Alyeska also certified in writing that a containment barge with equipment was within five hours sailing of any point in the Prince William Sound. Alyeska also told the state and federal government it had plenty of boom and equipment cached on Bligh Island.
But it was all a lie. On that March night in 1989 when the Exxon Valdez hit Bligh Reef in the Prince William Sound, the BP group had, in fact, not a lick of boom there. And Alyeska had fired the Natives who had manned the full-time response teams, replacing them with phantom crews, lists of untrained employees with no idea how to control a spill. And that containment barge at the ready was, in fact, laid up in a drydock in Cordova, locked under ice, 12 hours away.
As a result, the oil from the Exxon Valdez, which could have and should have been contained around the ship, spread out in a sludge tide that wrecked 1,200 miles of shoreline.
And here we go again. Valdez goes Cajun.
BP’s CEO Tony Hayward reportedly asked, “What the hell did we do to deserve this?”
It’s what you didn’t do, Mr. Hayward. Where was BP’s containment barge and response crew? Why was the containment boom laid so damn late, too late and too little? Why is it that the US Navy is hauling in 12 miles of rubber boom and fielding seven skimmers, instead of BP?
Last year, CEO Hayward boasted that, despite increased oil production in exotic deep waters, he had cut BP’s costs by an extra one billion dollars a year. Now we know how he did it.
As chance would have it, I was meeting last week with Louisiana lawyer Daniel Becnel Jr. when word came in of the platform explosion. Daniel represents oil workers on those platforms; now he’ll represent their bereaved families. The Coast Guard called him. They had found the emergency evacuation capsule floating in the sea and were afraid to open it and disturb the cooked bodies.
I wonder if BP painted the capsule green, like they paint their gas stations.
Becnel, yesterday by phone from his office from the town of Reserve, LA, said the spill response crews were told they weren’t needed because the company had already sealed the well. Like everything else from BP mouthpieces, it was a lie.
In the end, this is bigger than BP and its policy of cheaping-out and skiving the rules. This is about the anti-regulatory mania which has infected the American body politic. While the “tea baggers” are simply its extreme expression, US politicians of all stripes love to attack “the little bureaucrat with the fat rule book.” It began with Ronald Reagan and was promoted, most vociferously, by Bill Clinton and the head of Clinton’s de-regulation committee, one Al Gore.
Americans want government off our backs … that is, until a folding crib crushes the skull of our baby; Toyota accelerators speed us to our death; banks blow our savings on gambling sprees; and crude oil smothers the Mississippi.
Then, suddenly, it’s, “where was hell was the Government!” Why didn’t the government do something to stop it?
The answer is, because government took you at your word they should get out of the way of business, that business could be trusted to police itself. It was only last month that BP, lobbying for new deepwater drilling, testified to Congress that additional equipment and inspection wasn’t needed.
You should meet some of these little bureaucrats with the fat rulebooks. Like Dan Lawn, the inspector from the Alaska Department of Environmental Conservation who warned and warned and warned, before the Exxon Valdez grounding, that BP and Alyeska were courting disaster in their arrogant disregard of the rulebook. In 2006, I printed his latest warnings about BP’s culture of negligence.
When the choice is between Dan Lawn’s rule book and a bag of tea, Dan’s my man.
***
This just in: Becnel tells me that one of the platform workers has informed him that the BP well was apparently deeper than the 18,000 feet depth reported. BP failed to communicate that additional depth to Halliburton crews who therefore poured in too small a cement cap for the additional pressure caused by the extra depth. So it blew.
Why didn’t Halliburton check? “Gross negligence on everyone’s part,” says Becnel. Negligence driven by penny-pinching bottom-line squeezing. BP says its worker is lying. Someone’s lying here: the man on the platform ”“ or the company that has practiced prevarication from Alaska to Louisiana?
Greg Palast investigated the Exxon Valdez disaster for the Chucagh Native villages of Alaska’s Prince William Sound. An expert on corporate regulation, Palast, now a journalist, authored the New York Times bestseller, The Best Democracy Money Can Buy.
Subscribe to Palast’s Newsletter and podcasts
Follow Palast on Facebook and Twitter.
Support Palast’s work by making a tax-deductible donation.
GregPalast.com alumnus Zach Roberts is heading north to Palin country to get the real story on how Palin and her cronies have kept Big Oil safe from having to clean up their messes. He’ll be filming what’s left behind the Exxon Valdez spill and talking to those who know what’s under those oily rocks.
We’re helping him raise some dosh for his venture. Join us in supporting him by clicking here.
You can see Palast’s comments on Sarah and the teabaggers filmed by Roberts.
For those in New York, there will also be a fundraiser for Zach’s project at the Bowery Poetry Club. Palast will be the guest speaker. More info