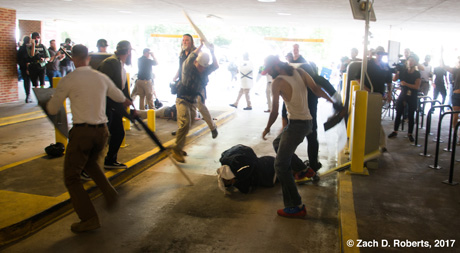 Above: Alex Michael Ramos, Dan Borden, and three more unidentified males brutally assault school teacher De’Andre Harris in a parking garage in Charlottesville on August 12. Photo: Zach D Roberts.
On Monday, August 27, police finally arrested the second of two assailants identified from Palast Investigative Fund photographer Zach D. Roberts’ Charlottesville photos. Alex Michael Ramos, who surrendered himself to the Monroe County Sheriff’s Office in Georgia on Monday evening, has been charged with one count of malicious wounding. Fellow attacker, Dan Borden, faces a similar charge for the brutal assault of Black school teacher De’Andre Harris, which nearly cost him his life.
Still missing, the FBI moving on the others whom the attackers must know, including the man with the gun pictured below. (Thanks to Titter user @extapdancer for digitally enhancing the shot with a program called “Unshake” – see inset.) 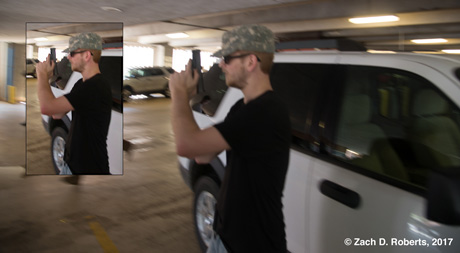 Above: Can you identify this man? (Click on image to view high resolution file.) Photo: Zach D Roberts.
“While we’re happy that arrests are going forward… these two men were identified immediately by journalists who covered the rally. There have been no additional identifications of any of the other participants by law enforcement,” said Harris’ attorney, Lee Merritt, in an interview for Democracy Now!. “We just hope that people don’t settle with these two arrests and that law enforcement doesn’t think that the job is done with these arrests.”
Note that the Justice Department has brought no charges for crossing state lines with intent to commit violence. (Maybe Jeff sessions thinks that the other attackers were “very fine people“.)”I’m also concerned in these arrests that they have been undercharged. Each were charged with one felony account of a malicious assaulting,” said Merritt. “We’re talking about a group of white supremacists who attacked a young black male at a white supremacist rally while shouting racial slurs if this doesn’t set the table for hate-based criminal charges, I don’t know what will.” Photojournalist Zach D. Roberts is Associate Producer and stake-out videographer for Greg Palast’s film, “The Best Democracy Money Can Buy.”  We are now making the post-election update.  You can add your name as a producer for a minimum tax deductible contribution of $1,000  ($500 for Co-Producer) or get a screen credit as a supporter for $100 minimum donation.  And you’ll get a signed copy of your film on DVD. Or help us fund our continued investigation of ‘their’ vote-swiping schemes for any amount no matter how large or small.

Before turning to journalism as an investigative reporter for The Guardian and BBC Television, Greg Palast was an investigator of fraud and racketeering for governments and labor unions worldwide. His investigations have appeared in Rolling Stone, Harper’s and New Statesman. Known as the reporter who exposed how Katherine Harris and Jeb Bush purged thousands of Black voters from Florida rolls to steal the 2000 election for George Bush. Palast has written four New York Times bestsellers, including Armed Madhouse, Billionaires & Ballot Bandits, and The Best Democracy Money Can Buy, now a non-fiction movie.
Stay informed, download the new, #TrumpStoleIt, post-election edition of our hit film, The Best Democracy Money Can Buy, or get the signed DVD, a signed copy of the companion book – or better still, get the Book & DVD combo.
Visit the Palast Investigative Fund store or simply make a tax-deductible contribution to keep our work alive! Alternatively, become a monthly contributor and automatically receive Palast’s new films and books when they’re released!
Or support the The Palast Investigative Fund (a project of The Sustainable Markets Foundation) by shopping with Amazon Smile. AmazonSmile will donate 0.5% of your purchases to the Palast Fund and you get a tax-deduction! More info.
Subscribe to Palast’s Newsletter. Follow Palast on Facebook and Twitter.
GregPalast.com