It was one of our team’s weirder investigative discoveries: The recently departed Justice Antonin Scalia – alev ha shalom – in 2011, was ticketed for recklessly driving his black BMW. 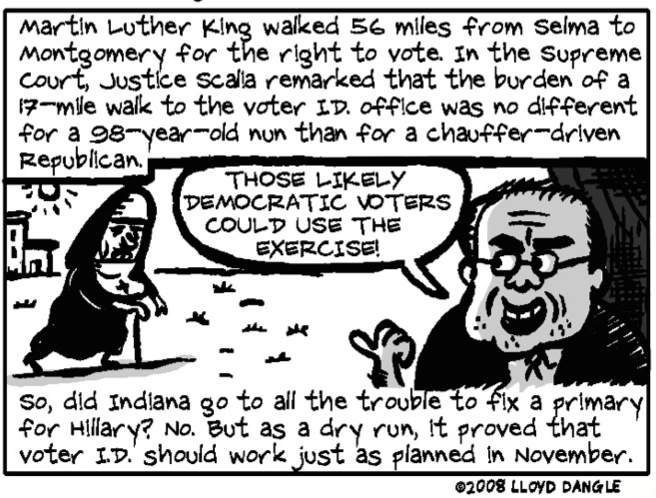 To his family, I offer condolences. To my readers, I offer the facts.  A man’s soul must be laid to rest, but history must not be buried as well, especially now that the Justice’s passing has become grounds for stories that border on historical obscenity, cf. the New York Times, “Liberal Love for Antonin Scalia.”
Love?? Well, if you want a Valentine, this ain’t it.
There’s been a lot of gleeful chuckling, for example, about Scalia’s courtroom bench “humor.” But behind his jokey comments lay a cruelty aimed at the poor, the injured, the Beemer-less class that turns to the Court as the last hope for protection against corporate and state violence.
Here’s a telling example of Scalia’s humor from a crucial voting rights case.  In 2005, Indiana’s Republican legislature passed a law barring the vote to anyone without current state photo ID.  The excuse: an official ID would prevent voter fraud – despite the fact that the state had not found, in over 100 years, even one case of a voter illegally impersonating another.
The media did get a laugh out of the ten nuns who were turned away from an Indiana polling station because the sisters’ driver’s licenses had expired.  The nuns were in their eighties and nineties.  Their licenses had expired, though they had not. Tough luck ladies, you lose your vote.
Bobby Kennedy and I covered the cute story of the nuns; but we also wrote about the unnoticed 78,000 African-Americans in Indiana who lost their right to vote because they did not have the right ID to vote. A disproportionate number of African-Americans lack cars, and therefore driver’s licenses; and only a few, apparently have passports for weekends in Paris.
(Get a free copy of the investigative report – in comic book form, Steal Back Your Vote.)
Civil rights groups sued, stating the obvious:  that the Indiana law is racist in its operation, a violation of the Voting Rights Act.  Black folk, the elderly, students, and poor whites-were all blocked from registering and voting. Federal Justice Terence Evans threw out the biased ID law, writing, “The Indiana voter photo ID law is a not-too-thinly veiled attempt to discourage election-day turnout by certain folks believed to skew Democratic.”
But Indiana argued before the Supreme Court that anyone could get an ID–they just had to get a non-driver ID from a county office.
Experts pointed out that the average poor person in Indiana – a poor person likely to be Black – lived an average 17 miles from a county seat.

That’s when Justice Scalia rode, recklessly, to Indiana’s rescue. Scalia chortled that “Seventeen miles is seventeen miles for the rich and the poor,” Black or white. How cute.  How droll, Mr. Justice.  And it’s true, at 65 miles per hour, 17 miles is just a 15 minute cruise, whether your BMW is black or white.
But the experts I spoke with told me they calculated that travel required two bus rides, cost a day of work, and included fees that amount to a poll tax.  In the non-BMW world, 17 miles is just another long, obstacle-choked road to the ballot for voters of color.
All week I’ve heard Scalia praised as an “originalist,” that is, sticking with the intent of the writers of the Constitution.  Really?  The right to vote without regard to race, the 15th Amendment, grew from the ground watered by the blood of Abraham Lincoln’s warriors.

Was it the original intent of these words to enable the creation of new Jim Crow obstacles to citizen rights?
Since when does an “originalist” so insouciantly ignore the clearly marked signposts of the law?
My suggestion: The President should not nominate a replacement for Scalia.  Let’s make this election a referendum:  make Americans choose our Court.  Let Americans decide if our Court will defeat or cuddle up to Jim Crow, whether our government may dictate whom you love and marry, whether the Bill of Rights is just a porous veil covering an unfettered and brutal spy state.  Let’s put the soul of America to a vote.
We are completing our film on the latest, hidden tactics of racially poisonous vote suppression which has grown like a mold from the 2013 decision by Scalia and his Court comrades to gut the Voting Rights Act.  As John Pilger kindly said of my work, “The information is a hand grenade.”  This film is the peaceable weapon for the new civil rights movement.
Right now, support the completion of The Best Democracy Money Can Buy:  a Tale of Billionaires and Ballot Bandits, with a $100 donation and I’ll list you in the film credits as a supporter and I’ll send you the signed DVD once the film wraps. Donate $50 if you just want the signed DVD …  For $1,000 or $500, get a film credit (Producer or co-Producer respectively) and tickets to the film’s opening.
Or support the film for any amount you can, no matter how small or large.
Please make this donation to our foundation right now.
I can’t thank you enough for your support-not just financial, but your vote of confidence in me and my team’s work over the years.
It’s what keeps us going.
*  *  *  *  *  *  *

For 15 years, Greg Palast has been uncovering voter suppression tactics in investigative reports for BBC Television, The Guardian, Harper’s and Rolling Stone.

In 2016 Greg Palast will be releasing his new feature film The Best Democracy Money Can Buy: A Tale of Billionaires and Ballot Bandits, which includes his award-winning investigation Jim Crow Returns.