For Truthout/Buzzflash
“What he [Griffin] did was absolutely illegal and he should be in jail.” 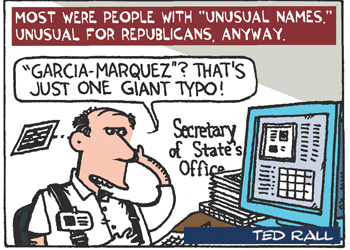 I
That’s hardly the kind of endorsement a candidate for Congress expects. But that is the conclusion of voting rights attorney Robert F. Kennedy Jr. after digging into the evidence of Congressional candidate Tim Griffin’s role in directing the Republican National Committee’s racially biased attack on voters known as “caging.”
A brutal mano-a-mano race in Arkansas’ Second District has become a showdown between Sarah Palin’s banner carrier Griffin (funded by SarahPAC) and Democrat Joyce Elliott who has drawn homeboy Bill Clinton back to Little Rock.
The ex-President, in Arkansas this week, was especially worked up about Griffin’s caging list vote suppression scheme. (Our Good Ol’ Boy in Chief told me back in 2008 he would bust out the story, and it only took him two years to do the right thing, a personal best for Bill.)

Here’s how caging a la Griffin works: In 2004, Griffin and the Bush re-election committee sent letters to Democratic voters marked “do not forward.” Griffin seemed especially interested in sending notes to active duty soldiers sent overseas, especially soldiers of color. When the letters to the servicemen were returned to the RNC as “undeliverable,” the Bush crew would then challenge the soldiers’ absentee ballots as fraudulent. In other words: Go to Iraq, lose your vote. Mission Accomplished.
(Download the BBC expose on caging, The Elections Files, here.)
This past Monday, the local NBC TV affiliate’s news anchor, Melissa Simas, confronted Griffin on air about his using caging to challenge the votes of Black soldiers on active duty overseas. Griffin, pathetically, tried to paint his “Tim Crow” operation as patriotic.
Well, at least this time, he didn’t cry.
In June 2007, our BBC Newsnight team disclosed that US Federal Prosecutor David Iglesias was fired because, he told us, the Griffin/Rove/Bush crew wanted him to arrest innocent people for voting fraud. He refused and he was fired. Seven other prosecutors, most of them Republicans, were also dismissed for failure to pursue phony “voter fraud” investigations which would justify the RNC’s “caging” operation.
Griffin and the Bush White House, says David Iglesias, justified caging by claiming that aliens and people with improbable names were registering to vote.
One of these resistant prosecutors who chose integrity over politics, Bud Cummins of Little Rock, was replaced with Griffin himself. 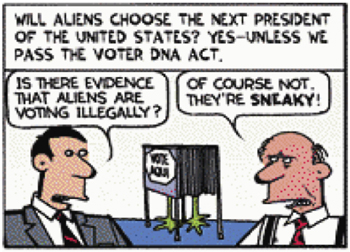 Illustration from Steal Back Your Vote comic

The day after BBC broadcast our expose, Tim Griffin resigned as US prosecutor, literally in tears, blaming “that British reporter” for his downfall. Mr. Griffin, I’m not British, I’m as American as apple pie and post-imperial warfare.
NBC duly broadcast Griffin’s claim that he didn’t even know what “caging” was. But here is a copy of the memo Griffin himself sent to the head of the Bush campaign in Florida to which he attached a file titled, “Caging.xls”
You have to get up pretty early in the morning to get ahead of Dim Griffin.
The RNC’s caging lists targeted Blacks, Hispanics, the poor of all shades and Florida’s Jewish voters (the Elderly of Zion!), not out of prejudice against this demographic’s skin color or religion but a distaste for the color of their vote, Democratic blue.
NBC’s Simas closed by reading from a judge’s injunction ordering the Republican National Committee to end systematic racially-targeted voter challenges.
Notably, the order was issued before Griffin sent out his list.  As attorney Kennedy pointed out, the Civil Rights Act of 1964, promoted by RFK’s father, made biased and bogus ballot challenges a federal crime, a breaking-rocks-on-the-chain-gang crime.
A week from Tuesday, the voters of Little Rock will decide if Griffin deserves to go to Washington or the lock-up at Bentonville.  Stay tuned.
***
Want to see Tim cry? Get the original DVD or download the complete film, The Elections Files, for a tax-deductable donation to the Palast Investigative Fund.
Or grab a copy of the 24-page full-color comic book voter guide, Steal Back Your Vote, written by Greg Palast and Bobby Kennedy Jr. Illustrated by pens mightier than swords Ted Rall, Lukas Ketner and Lloyd Dangle.
Or, you can download the comic book/voter guide to your iPad or e-reader or computer in screaming color.
Steal Back Your Vote is real hard-as-nails investigative reporting – and gives you non-partisan, non-bullshit directions on how to protect your vote from caging, purging, and the attack of the Rove-bots.
And your tax-deductible donation keeps our team of eagle-eyed investigators on the trail of the ballot bandits.
This is Greg Palast, reporting for Buzzflash, Truthout and you.
***
Greg Palast is an investigative journalist and the author of the New York Times bestsellers Armed Madhouse and The Best Democracy Money Can Buy. His reports can be seen on BBC Newsnight.
Subscribe to Palast’s Newsletter and podcasts.
Follow Palast on Facebook and Twitter.
www.GregPalast.com