Rumsfeld: Virgin For The Volcano 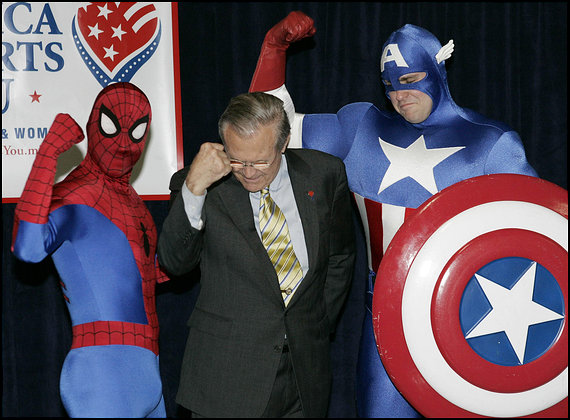 Why doesn’t George Bush just throw a virgin into a volcano? Or Dick Cheney? Or Lynn Cheney?
Well, someone’s head had to roll — not for our bloody defeat in Iraq, but for the GOP’s defeat in the mid-terms.
Well, I’m not celebrating. I know that most of my readers will be tickled pink that Donald Rumsfeld has been given the kiss-off. But let’s get this straight: It wasn’t Rumsfeld who stood up in front of the UN and identified two mobile latrines as biological weapons labs, was it, General Powell?
It wasn’t Rumsfeld who told us our next warning from Saddam could be a mushroom cloud, was it Ms. Rice?
It wasn’t Rumsfeld who declared that al-Qaida and Saddam were going steady, was it, Mr. Cheney?

Yes, Rumfeld is a swaggering bag of mendacious arrogance, a duplicitous chickenhawk, yellow-bellied bully-boy and tinker-toy Napoleon – but he didn’t appoint himself Secretary of Defense.

Rummy’s the puppet — but the problem is the puppeteer.
President Bush is one lucky fella. I can imagine him today on the intercom with Cheney: “Well, pardner, looks like the game’s up.” And Cheney replies, “Hey, just hang Rummy out the window until he’s taken all their ammo.”
Americans didn’t end up in a Vietnam on the Tigris because of Rumsfeld’s failure of command. The problem was, and is, the failure of Rumsfeld’s Commander-in-Chief.
Greg Palast is the author of the recently released New York Times bestseller, “ARMED MADHOUSE.” Go to www.GregPalast.com.
Bonnie Raitt, Larry David and friends invite you to join Jackson Browne, Ed Asner, Ben Vereen and other stars on November 16, 6-8pm, at an intimate gathering in the home of Jodie Evans in Beverly Hills, California, to support the Palast Investigative Fund, a 501c3 educational foundation. For details and to request one or two of the limited number of invitations, go to http://www.palastinvestigativefund.org/november-16th-fundraiser