The untold story of the sources of the loot controlled by Paul “The Vulture” Singer and why he needs to buy the White House
For TruthOut/Buzzflash – update
Greg Palast has been investigating Singer and other finance vultures for BBC Television’s Newsnight. His new book is Vultures’ Picnic: In Pursuit of Petroleum Pigs, Power Pirates and High-Finance Carnivores.
It’s out of the closet — or, more accurately, out of the coven.  The list of the billionaires who have given at least $1 million to Restore Our Future, the pro-Romney Super PAC, is headed by Paul Singer.  Singer and his hedge fund crew at Elliott Associates, with their donations to the Republican National Committee and other “independent” groups like the Swift Boat campaign, makes it likely that Singer is now the top funder for the GOP. 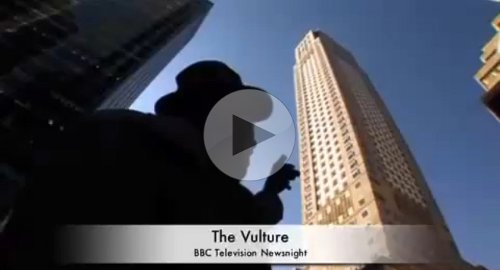 For BBC-TV, I’ve been tracking Singer for five years.  And this is the key fact you need to know about the man whose cash would pick our President:  Paul Singer likes to breakfast on decayed carcasses.
The carrion king is known as Singer The Vulture. I didn’t give him the moniker. The name Vulture was tagged on him and his speculator colleagues by the Prime Minister of Britain and the World Bank. Recently, former Deputy Secretary-General of the UN Winston Tubman suggested I ask Singer or his business associates, “Do you know you’re causing babies to die?”
What does this guy do – put poison in kiddies’ milk? Worse: he takes away the milk.

Before I get to the story of his attack on African kids, let me tell you how Singer made his first billion, his first killing (and I don’t mean that metaphorically): via an attack on victims of asbestos poisoning.
Background: The executives of a few asbestos companies, WR Grace, USG and Owens-Corning, knew that their asbestos factories were killing their workers. When caught and sued, the companies filed for bankruptcy, agreeing to pay almost all their earnings to those dying and injured by their asbestos.
But Singer had a better idea. These companies, as you can imagine, were worth next to nothing; and Singer bought Owens-Corning for a song.
If he could cut the amount paid to the victims, Singer could boost Corning’s value big time. So, a PR campaign was begun attacking the dying workers, saying they were all faking it.
One attacker was a guy named George W. Bush.
In January 2005, President Dubya held a televised meeting to promote an “expert” who pronounced that over half a million workers suing Singer’s industry were liars. If workers couldn’t breathe, he said to the grinning President, it wasn’t the fault of asbestos.
The “expert” was not a doctor, but notably, his “research” was partly funded by …Paul Singer. And so was Bush. Since the death of Enron’s Ken Lay, Singer and his vulture flock at Elliott International had become the top contributors to the Republican National Committee. It’s hard to measure his largesse exactly because some of that help comes in through the side door. For example, Singer put money behind the “Swift Boat” smear on Bush’s opponent, John Kerry.
The legal, political and PR attacks on the dying workers chiseled away the compensation expected to be paid by the asbestos companies, boosting their net worth. Singer then flipped Corning, selling it for a neat billion-dollar profit.
It’s legal, it’s brilliant, it’s sick, it’s Singer.
Asbestos workers have lawyers and the law, weak as it may be, so Singer only made a billion. Singer hit on a way of squeezing billions from those even more vulnerable.
Singer’s new modus operandi is to find some forgotten tiny debt owed by a very poor nation (Peru and Congo were on his menu). He waits for the US and European taxpayers to forgive the poor nations’ debts; then waits at bit longer for offers of food aid, medicine and investment loans. Then Singer pounces: legally grabbing at every resource and all the money going to the desperate country. Trade stops, funds freeze and an entire economy is effectively held hostage.
Singer then demands aid-giving nations pay monstrous ransoms to let trade resume. At BBC TV’s Newsnight, we learned that Singer demanded $400 million dollars from the Congo for a debt he picked up for less than $10 million. If he doesn’t get his 4,000% profit, he can effectively starve the nation. I don’t mean that figuratively – I mean starve as in no food. In Congo-Brazzaville last year, one-fourth of all deaths of children under five were caused by malnutrition.
For BBC, I tried to ask Vulture Singer the diplomat’s question about the baby killing, but I couldn’t get past George Gershwin. (In the New York office tower housing the billionaires’ roost, a George Gershwin look-alike in top hat and tails plays show tunes on a grand piano for Singer’s grand entrance.)
One of my favorite Singer scores was his successful scheme to legally loot the Treasury of Peru. The nation’s US lawyer told me, aghast, how Singer let Peru’s rogue President, Alberto Fujimori, flee his nation to avoid murder charges. Singer had seized Fujimori’s get-away plane. The Vulture named his price: One of Fujimori’s last acts as president before he fled was to order his dirt-poor nation to pay Singer $58 million.
Why the Billionaires Need to Buy the White House
Paul Singer had placed a big bet on the asbestos industry; then, set out to fix the casino, helping install Bush in the White House. That is, he had a President willing to beat up on asbestos workers and push for so-called “tort reform” that undermined these victims’ claims. What the victims lost, Singer gained.
But there’s trouble on the horizon for Singer. In 2007, Britain outlawed Singer and all other Vulture speculators in Third World debt from collecting their pound of flesh in the United Kingdom. Other European nations are following suit.
Several US Congressmen are pushing a UK-style prohibition on Singer’s activities. (Even Chevron Corporation is complaining about the Vulture attacks. When Chevron calls bankers unscrupulous, they’ve got to be really unscrupulous.) Without a veto pen over Congress, Singer stands to lose hundreds of millions of dollars.
Singer plays defense, but is best at offense: To collect on some of his claims against Argentina, his lobbyists have pushed a bill in Congress to put an economic choke-hold on trade with the South American nation. Obama and Secretary of State Hillary Clinton blocked this crazy attack on our ally. As a result, Singer is not a happy gaucho. There will be blood. Obama will have to pay.
What every billionaire wants
There’s one thing that every billionaire wants: another billion. And that’s threatened by Obama’s plan to tax the “carried interest” tax deferment.
Guys like Singer don’t pay taxes like you and I do. While we pay taxes on income, the profits from vulture speculation and arbitrage are often recorded as “carried interest,” effectively not taxed for years, then when collected, only at a low rate. It’s a billion-dollar benefit for the billionaires, and every Republican candidate has sworn to keep this loophole open and make sure you and I pay Singers’ taxes for him.
*****
Greg Palast is the author of the brand new book Vultures’ Picnic.
You can read Vultures’ Picnic, “Chapter 1: Goldfinger,” or download it, at no charge: click here.
Support the Palast Investigative Fund and keep our work alive.
Subscribe to Palast’s Newsletter and podcasts.
Follow Palast on Facebook and Twitter.
GregPalast.com