Top funders made billions from US Treasury 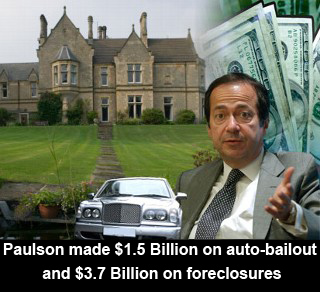 [Thursday February 23] Republican Presidential candidate Mitt Romney called the federal government’s 2009 bail-out of the auto industry, “nothing more than crony capitalism, Obama style… a reward for his big donors to his campaign.” In fact, the biggest rewards ­­- a windfall of more than two billion dollars care of US taxpayers ­­­– went to Romney’s two top contributors.
John Paulson of Paulson & Co and Paul Singer of Elliott International, known on Wall Street as “vulture” investors, have each written checks for one million dollars to Restore Our Future, the Super PAC supporting Romney’s candidacy.
Gov. Romney last week asserted that the Obama Administration’s support for General Motors was a, “payoff for the auto workers union.” However, union workers in GM’s former auto parts division, Delphi, the unit taken over by Romney’s funders, did not fare so well. The speculators eliminated every single union job from the parts factories once manned by 25,200 UAW members.
The two hedge fund operators turned a breathtaking three-thousand percent profit on a relatively negligible investment by using hardball tactics against the US Treasury and their own employees.
Under the control of the speculators, Delphi, which had 45 plants in the US and Canada, is now reduced to just four factories with only 1,500 hourly workers, none of them UAW members, despite the union agreeing to cut contract wages by two thirds.
It wasn’t supposed to be quite so bad. The Obama Administration and GM had arranged for a private equity investor to provide half a billion dollars in new capital for Delphi, but that would have cut the pay-out to Singer and Paulson. The speculators blocked the Obama-GM plan, taking the entire government bail-out hostage. Even the Wall Street Journal’s Dealmaker column was outraged, accusing Paul Singer of treating the auto company, “like a third world country.”
But it worked. Singer and Paulson got what they demanded. Using US Treasury funds:

If those plants had been closed, GM factories would have shut down cold for lack of parts.
Then there was the big one: The US government agreed to take over $6.2 billion in pension benefits due Delphi workers under US labor law.

Governor Romney, while opposing the bail-out of GM, accused Obama of eliminating the pensions of 21,000 non-union employees at Delphi. In fact, it was Romney’s funders who wiped out 100% of the pensions and health care accounts of Delphi salaried retirees­­.
Paulson and Singer paid an average of about 67 cents a share for Delphi. In November, 2011, Paulson sold a chunk of his holdings for $22 a share. Paulson’s gain totals a billion and a half dollars ($1,499,499,000), and Singer gained nearly a billion ($899,751,000) — thirty-two times their investment.
One-hundred percent of this gain for the Paulson and Singer hedge funds is accounted for by taxpayer bail-out support.
But, unlike the government loans and worker concessions given to GM, the US Treasury and workers get nothing in return from Delphi.
From GM, the US Treasury got warrants for common stock (similar to options) that have already produced billions in profit.
And Delphi? It’s doing well for Paulson and Singer. GM and Chrysler, still in business by the grace of the US Treasury, remain Delphi’s main customers, buying parts now made almost entirely in China and other cheap-labor nations.
And exactly who are Paulson and Singer?
Billionaire John Paulson became the first man in history to earn over $3 billion in a single year — not for his hedge fund, but for himself, personally. At the core of this huge payday was a 2007 scheme by which, via Goldman Sachs, he sold “insurance” on subprime mortgage loans. According to a lawsuit filed by the Securities Exchange Commission, Goldman defrauded European banks by pretending that Paulson was investing in the insurance. In fact, Paulson was, secretly, the beneficiary of the insurance, reaping billions when the mortgage market collapsed.
Goldman paid half a billion dollars in civil fines for the fraud. While the SEC states that Paulson knowingly participated in the scheme, he was not fined and denies he defrauded the banks.
Multi-billionaire Singer is known as Wall Street’s toughest “vulture” speculator. Vulture fund financial attacks on the world’s poorest nations have been effectively outlawed in much of Europe and excoriated by human rights groups, conduct Britain’s former Prime Minister Gordon Brown described as, “morally outrageous.”
***
Greg Palast has been investigating vulture speculator Paul Singer for BBC Television Newsnight and Britain’s Guardian for five years. The investigative reporter is author of Vultures’ Picnic: In Pursuit of Petroleum Pigs, Power Pirates and High-Finance Carnivores and the New York Times bestseller, The Best Democracy Money Can Buy. For reports on Singer and vulture funds, go to www.GregPalast.com and www.VulturesPicnic.org.
You can follow Palast on twitter at Greg_Palast and find him on facebook at Greg Palast.