Roger Waters of Pink Floyd fame attended the trial and persecution of Steven Donziger, the human rights lawyer who defended the Cofan indigenous people of the Amazon against Chevron Oil. 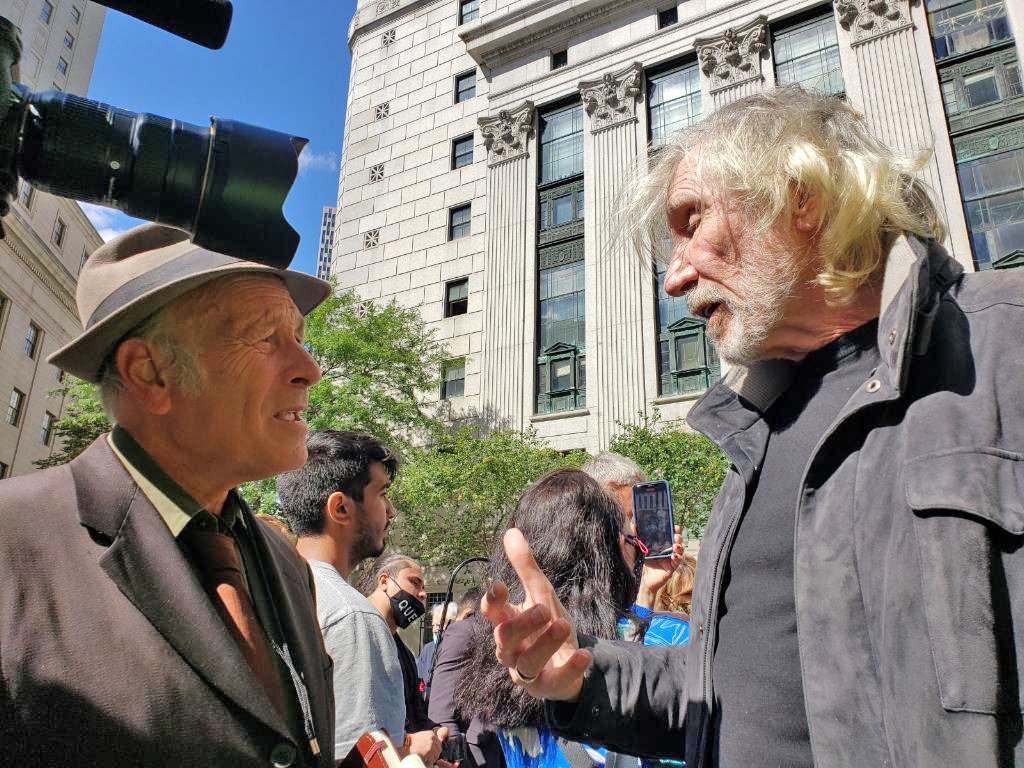 Waters actually sat through several days of the trials, horrified at the brain-damaged political hacks that pass for judges in the United States. Unlike in his native Britain and other advanced nations, US judges are picked by politicians.

And since the politicians are picked by corporate powers, well…. It would not have surprised us if the judge came in wearing the Chevron logo on her robes. Waters wrote the judge a note, but realized it would not impress the Republican Torquemada: She don’t need no dark sarcasm in the courtroom.

“This choir will sing at the top of its lungs until we get justice.”
— Roger Waters speaks at the post-sentencing Free Donziger rally on Oct 1, 2021.
Video by Zach D. Roberts, edited by Nicole Powers, for the Palast Investigative Fund.

Donziger was sentenced to 6 months in jail for Contempt of Court in a Manhattan courtroom last Friday, October 1, 2021. It was the maximum sentence for the Class B misdemeanor, and a uniquely onerous one for a technical violation by an officer of the court (a charge Donziger is appealing) that is usually punished by a slap on the proverbial wrist. Instead, Judge Preska, who presided over the contempt case and denied Donziger a jury trial, said she was giving him “the proverbial 2 X 4 between the eyes.”

Waters, who attended the hearing, spoke at the post-sentencing “Free Donziger” rally outside the courthouse, lambasting the Judge. “Preska today kept reiterating what happened in the RICO trial. I was sitting there…desperate to stand up, call her a liar in court,” said Waters.

“The RICO trial… I was there. I watched it. It was a complete put-up job… When it went to trial… to appeal in the Second Circuit, I’ve never been able to understand why the appellate judges were not allowed to hear the testimony that said that the chief witness for Chevron in the RICO trial was a man called Guerra, who lied through his teeth. He was paid $2 million by Chevron to lie in court.

“And it’s super important. It shows that that was a kangaroo court. And this is a kangaroo court as well. But we’re not going anywhere. This choir will sing at the top of its lungs until we get justice, not just for Steven Donziger, but for the people of Ecuador whose lives have been destroyed.”