Civil Rights leader Rev. Joseph Echols Lowery died at home, surrounded by his daughters, on Friday, March 27, at the age of 98. He did not put down his sword until his last day. 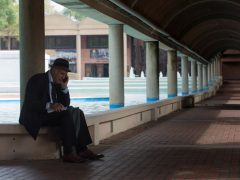 Palast on the phone with Lowery at The King Center. Photo: Zach D. Roberts

It was Rev. Lowery who agreed to have Helen Butler, the Executive Director of his organization, the Georgia Coalition for the Peoples Agenda, join me as a co-plaintiff in our successful federal suit against Georgia’s GOP Sec. of State, now Governor, Brian Kemp.

Sadly, this is as close as I got to Rev. Lowery. I called him from the King Memorial in Atlanta because he was too ill to meet in person. When I explained Kemp and Kris Kobach’s voter purge program, he told me, “It’s Jim Crow all over again.”

And we are ready to battle again.

@hyp3rcrav3 @Greg_Palast Southern states have closed down at least 868 polling places for the 2016 election.