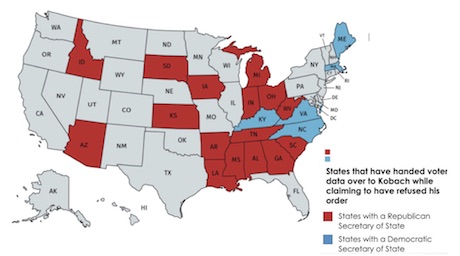 Many Republican states (red) indicated to CNN that they will “resist” Kris Kobach’s demand for full voter files-but have already given him those files. Four Democratic states (blue) have made the same inaccurate claim. North Carolina’s Democratic Governor last week ordered his Board of Elections not to hand over voter files to Kobach-but the Republican-controlled board had already turned over 6,745,639 voter files.
Election officials in forty-four states say they will refuse to comply with the June 28 written request from Kobach, whose advisory commission was created in May by Trump via executive order. Trump has made repeated and so-far unsubstantiated claims that millions voted illegally in the 2016 election.
“They can go jump in the Gulf of Mexico, and Mississippi is a great state to launch from,” responded Mississippi’s Republican Secretary of State Delbert Hosemann.
“The President’s Commission has quickly politicized its work by asking states for an incredible amount of voter data that I have, time and time again, refused to release,” said Louisiana’s Secretary of State Tom Schedler.
To the contrary, Schedler and voting officials from fifteen other Republican states, the majority of those allegedly “resisting” Kobach’s demand, have already shared detailed voter files with Kobach in his capacity as Secretary of State of Kansas.
Records obtained by The Progressive from the Kansas Secretary of State office showed that Schedler turned over nearly three million voter files to Kobach earlier this year, including voter birthdates and Social Security information.
In Mississippi, Hosemann turned over the state’s entire voter rolls to Kobach, some 2,092,886 files. Each file includes voter names, last four digits of their social security numbers, voting address, and voting history.
Kobach, who has recently announced his candidacy for Governor of Kansas, has indicated the lists will be used to remove illegal voters. But voting rights advocates say the goal is actually to allow fewer people to vote.
Twenty-one states listed by CNN as refusing Kobach his demands for voter files have already turned over voter files to Kobach’s office.
“The lists will almost certainly be used to…suppress the vote of citizens of color,” says Dee Hunter of the newly formed Civil Rights Center. Hunter’s group is part of a coalition including the ACLU, Common Cause, the NAACP of Georgia, Rev. Jesse Jackson of the Rainbow/PUSH Coalition, and other organizations calling for a halt to the expansion of Kobach’s Crosscheck system.
Voter lists from Mississippi, and twenty-seven other states, were turned over to Kobach beginning years ago as part of a voter-list purge program called “Interstate Crosscheck,” Hunter explains. The list aims to identify Americans registered in more than one state and intending to vote twice in one election, which is a crime. Any names identified as potential double-voters receives a postcard which, if unanswered, could lead to removal from the rolls.
According to a Rolling Stone analysis of data obtained from states participating in Interstate Crosscheck, as many as 1.1 million names were purged from voter rolls before the 2016 election.
According to database expert Mark Swedlund, an astonishing one in six Hispanics and one in nine African-Americans are on Kobach’s “potential double registered” list of seven million suspects in the twenty-eight states.
But Crosscheck functions by merely matching the first name and last name of voters in the 28 Crosscheck states. This screenshot of the Georgia-Virginia suspect list created by Kobach shows that Barbara ANN Jackson of Georgia is identified as potentially the same voter as Barbara FAYE Jackson of Virginia. Similarly, Billy RAY Jackson may be the same voter as Billy MANUEL Jackson JR. 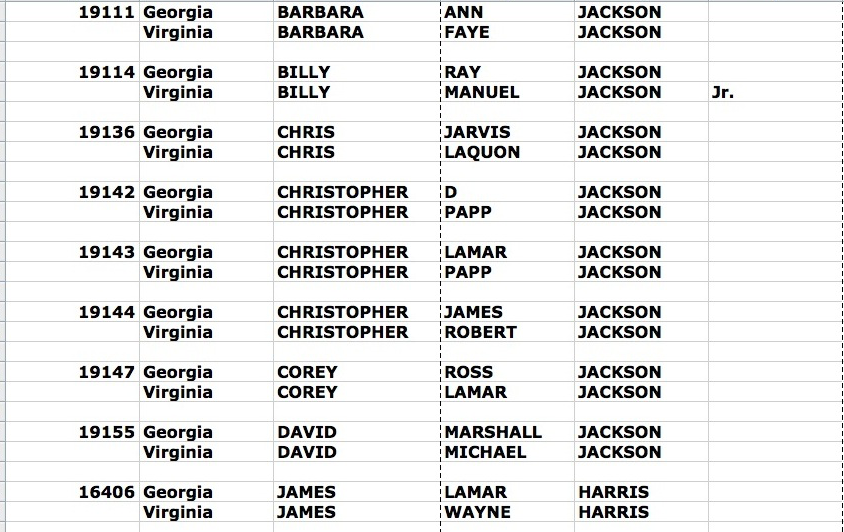 Detail from Crosscheck results identifying potential “duplicate” voters in Virginia and Georgia.
The matches may seem ludicrous, but all these voters could lose their vote.
Swedlund calls Kobach’s approach a “simplistic, childish” matching algorithm. He says, “If your name is Jose Hernandez, you’re likely suspected of voting in 28 states!”
Indeed, in Virginia, at least 12 percent of voters on Kobach’s list lost their votes before the last election.
Virginia has purged tens of thousands of voters from the state’s rolls using the Crosscheck suspect list.Before the election I spoke with Kobach at a Republican ice-cream social and asked him about Crosscheck potentially misidentifying voters as duplicate registrants. “Our system would not yield this match,” Kobach insisted. But when I showed him that Crosscheck contained literally millions of mis-matches, he jumped up, clutching his vanilla ice-cream-and ran for it.
He did call later to answer my questions, and stated he saw no problem in Crosscheck’s approach “to get the widest list possible” in the hunt for illegal voters.
***
Greg Palast (Rolling Stone, Guardian, BBC) is the author of The New York Times bestsellers, The Best Democracy Money Can Buy and Billionaires & Ballot Bandits, now out as major non-fiction movie.
Stay informed, get the signed DVD, a signed copy of the book companion – or better still, get the Book & DVD combo.
Visit the Palast Investigative Fund store or simply make a tax-deductible contribution to keep our work alive! Alternatively, become a monthly contributor and automatically receive Palast’s new films and books when they’re released!
Or support the The Palast Investigative Fund (a project of The Sustainable Markets Foundation) by shopping with Amazon Smile. AmazonSmile will donate 0.5% of your purchases to the Palast Fund and you get a tax-deduction! More info.
Subscribe to Palast’s Newsletter. Follow Palast on Facebook and Twitter.
GregPalast.com