Wisconsin “Movers” Voter Purge List Errors
39,722 Face Loss of Vote for Moving Despite not Having Moved

On Tuesday, the Wisconsin Supreme Court will hear a suit brought by a right-wing think tank demanding the state purge — cancel the voter registrations of 129,000 alleged “movers”— voters who moved out of their town or out of state.

The experts found 39,722 Wisconsin voters who supposedly moved from their registration addresses, had, in fact, not moved, a minimum 25.8% error rate.    The team of experts are the same firms used by Amazon, Ebay, Home Depot — including Merkle Inc, the main licensee on address changes contracted by the US Postal Service.

Black Voters Matter Fund will present the report’s startling findings to the state on Monday.

Using 240 data bases and specially licensed Post Office files, these experts in what the industry calls, “Advance Address List Hygiene,”  also identified a further 58,404 or 38% who had moved, but only within their county.   Wisconsin law and the National Voter Registration Act prohibit cancelling the registration of those who move within their town or city.

The list, said Palast, is also “violently biased against Black voters and voters of color.”  Investigative reporter Palast (Rolling Stone, Democracy Now), a statistician and economist by training, said the team also plotted list by Census tract and found that the that the higher percentage of African-Americans in the neighborhood, the more likely you are be wrongly tagged for the purge.

The Palast team also reached out to 700 voters and filmed several swearing they did not move.  Most are voters of color in Madison and students in Madison, home of the Univ. of Wisconsin.    A young African-American woman, Sequanna Taylor was identified as leaving Milwaukee—though she is a Milwaukee County Supervisor.

Three weeks ago, the ACLU of Georgia released the Palast report on the wrongful purge of 198,000 by Georgia GOP’s Secretary of State.

If you live in Georgia or Wisconsin, go to SaveMyVote2020.org and see if you are on a purge list—then click link to re-register now. 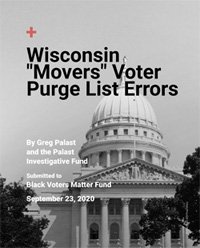 We found 39,722 Wisconsin voters who supposedly moved from their registration addresses, who, in fact, had not moved, a minimum 25.8% error rate based on the 153,779 “movers” list.

If even half of these moved locally, the error rate rises to 45.8%.

(Wisconsin law and the National Voter Registration Act prohibit cancelling the registration of those who move within their voting jurisdiction.)

Note: Our findings are based on the list of 153,779 voters on the “movers” list given to the Palast Fund by the Wisconsin Board of Elections. The list has been whittled down from over 200,000 to 129,000. Having analyzed both lists our findings remain, in proportion, unchanged. 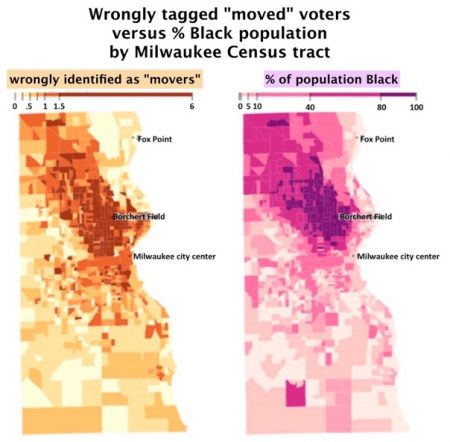 In addition, as illustrated graph pictured on the right (click to enlarge), there is measurable bias against voters of color. We also found bias against low-income and young voters.

The Palast Investigative Fund, a 501(c)3 non-partisan, not-for-profit, has created a report of its investigation of a list of Wisconsin citizens, compiled by ERIC, who are subject to purge. This report has been submitted to the Black Voters Matter Fund.

Lead investigator Greg Palast and Black Voters Matter Fund co-founders, LaTosha Brown and Cliff Albright, will be holding a joint video press conference on Monday, September 28 at 9 AM PT / 11 AM CT / 12 PM ET to go through the report’s findings. If you’d like to participate contact us.

Given that most Wisconsin voters whose right to vote is under threat will have no idea that they are on the state’s purge list, as a public service, the Palast Investigative Fund has created a website, SaveMyVote2020.org, to allow voters to look up their names and addresses to see if they’re on the list. The site also provides links for these voters to re-register online if need be.

Are you on the Wisconsin Purge List?
Find out at: SaveMyVote2020.org 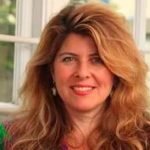 A Rhodes Scholar and former advisor to Clinton and Gore campaigns, and author of eight NYT nonfiction bestsellers, Wolf has been creating globally valuable news and opinion content for digital media and for publishers for 28 years.