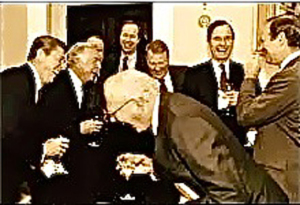 You’re not going to like this. You shouldn’t speak ill of the dead. But in this case, someone’s got to.
On the 100th Anniversary of Ronald Reagan’s birth, as we suffer a week of Reagan-kitcheria and pukey paeans, let us remember:
Reagan was a con-man. Reagan was a coward. Reagan was a killer.
In 1987, I found myself stuck in a crappy little town in Nicaragua named Chaguitillo. The people were kind enough, though hungry, except for one surly young man. His wife had just died of tuberculosis.
People don’t die of TB if they get some antibiotics. But Ronald Reagan, big-hearted guy that he was, had put a lock-down embargo on medicine to Nicaragua because he didn’t like the government that the people there had elected.
Ronnie grinned and cracked jokes while the young woman’s lungs filled up and she stopped breathing. Reagan flashed that B-movie grin while they buried the mother of three.

And when Hezbollah terrorists struck and murdered hundreds of American marines in their sleep in Lebanon, the TV warrior ran away like a whipped dog – then turned around and invaded Grenada. That little Club Med war was a murderous PR stunt so Ronnie could hold parades for gunning down Cubans building an airport.
I remember Nancy, a skull and crossbones prancing around in designer dresses, some of the “gifts” that flowed to the Reagans – from hats to million-dollar homes – from cronies well compensated with government loot. It used to be called bribery.
And all the while, Grandpa grinned, the grandfather who bleated on about “family values” but didn’t bother to see his own grandchildren.
The New York Times, in its canned obit, wrote that Reagan projected, “faith in small town America” and “old-time values.”
“Values” my ass. It was union-busting and a declaration of war on the poor and anyone who couldn’t buy designer dresses. It was the New Meanness, bringing starvation back to America so that every millionaire could get another million.
“Small town” values? From the movie star of the Pacific Palisades, the Malibu mogul? I want to throw up.
And all the while, in the White House basement, as his brain boiled away, Reagan’s last conscious act was to condone a coup d’etat against our elected Congress. Reagan’s Defense Secretary Casper the Ghost Weinberger with the crazed Colonel, Ollie North, plotted to give guns to the Monster of the Mideast, Ayatolla Khomeini.
Reagan’s boys called Jimmy Carter a weanie and a wuss although Carter wouldn’t give an inch to the Ayatollah. Reagan, with that film-fantasy tough-guy con in front of cameras, went begging like a coward cockroach to Khomeini, pleading on bended knee for the release of our hostages.
Ollie North flew into Iran with a birthday cake for the maniac mullah – no kidding – in the shape of a key. The key to Ronnie’s heart.
Then the Reagan roaches mixed their cowardice with crime: taking cash from the hostage-takers to buy guns for the “contras” – the drug-runners of Nicaragua posing as freedom fighters.
I remember as a student in Berkeley the words screeching out of the bullhorn, “The Governor of the State of California, Ronald Reagan, hereby orders this demonstration to disperse” – and then came the teargas and the truncheons. And all the while, that fang-hiding grin from the Gipper.

In Chaguitillo, all night long, the farmers stayed awake to guard their kids from attack from Reagan’s Contra terrorists. The farmers weren’t even Sandinistas, those ‘Commies’ that our cracked-brained President told us were ‘only a 48-hour drive from Texas.’ What the hell would they want with Texas, anyway?
Nevertheless, the farmers, and their families, were Ronnie’s targets.
In the deserted darkness of Chaguitillo, a TV blared. Weirdly, it was that third-rate gangster movie, “Brother Rat.” Starring Ronald Reagan.
Well, mis amigos, your kids can sleep easy tonight.  The Rat is dead.
All week you’re going to hear about how Reagan restored America’s sense of patriotism – as if heartless slaughter, Club Med wars and making racism respectable are patriotic . (When they said “small town values” you know the color of the town, don’t you?).
I wonder if the Reaganauts can recognize any of the weapons they sold the mullahs when they see students gunned down in Teheran.
I do plan a memorial, for the victims, not the victimizer.
Please join me in commemorating the ill star that brought us a celluloid cowboy on his movie-set horsey by lighting a candle for a mom from Chaguitillo.
******
This obituary was originally published in The London Observer on Reagan’s death in 2004.
The author received close to 150 death threats and suggestions for acrobatic acts of intercourse with beasts and relatives.
Therefore, we have reserved a special email, deaththreat@gregpalast.com just for your next threats.
Sign up for Greg Palast’s investigative reports at www.GregPalast.com.
Download Palast’s latest series of investigative reports for BBC Newsnight and Democracy Now. Palast Investigates.
******
Greg Palast is an investigative journalist and the author of the New York Times bestsellers Armed Madhouse and The Best Democracy Money Can Buy. His reports can be seen on BBC Newsnight.
Subscribe to Palast’s Newsletter and podcasts.
Follow Palast on Facebook and Twitter.
GregPalast.com