Will Senator Rand Paul, misunderstanding the voices of the un-dead, block the appointment of Janet Yellen to head the Federal Reserve Board?

No joke.  Tea Party fave Paul told the Wall Street Journal he would have preferred Milton Friedman, the free-market fanatic, to the liberal-ish Yellen.  But, as a stunned Journal reporter informed the Senator, Milton Friedman is, alas, some years dead.
Unbowed, Paul contends he is channeling Friedman from beyond the grave, invoking the Nobel Laureate economist to support the Senator’s quest against Yellen’s well-known commitment to easy money policies at the Fed.
Paul has written, “One need not be an economist or mathematician to wonder whether printing money out of thin air is a sound way to help the economy.”
You’re more than correct, Senator.  If you don’t know why America is printing more dollar bills, then you definitely are NOT an economist NOR a mathematician.
As a former student of the late professor Friedman, I’m quite certain that Milty would have been thrilled by Yellen’s push to main-line more greenbacks into the US economy. 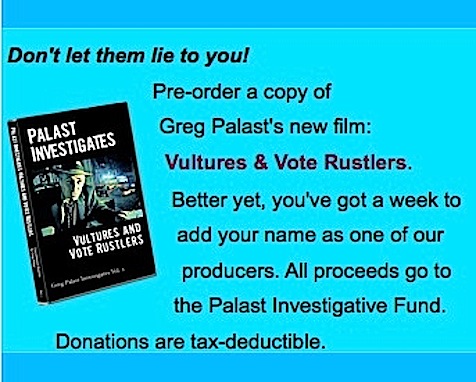 If you return to your sÃ©ance, Senator, and ask Friedman’s ghost about “printing money out of thin air,” you’d find out he all but invented the idea.  Or, throw away the Ouija Board and read Friedman’s A Monetary History of the United States 1867-1960, his Nobel-winning work, in which he argued convincingly that the Federal Reserve could have prevented the Great Depression had it radically pumped up the money supply.
Friedman’s – and Yellen’s – greatest fear is not inflation, but deflation, a disastrous fall in prices due to starving the economy of dollars.
Senator Paul moans that, since the market crash of 2008, the Federal Reserve has printed $3.6 trillion and dumped these dollar bills, ink still wet, into the financial system.  Paul is waiting for the day when the printing of all these dollars will suddenly cause the price of a can of tuna to soar to $7,000.
But despite the Fed’s smoking-hot printing press, the price of tuna is perilously close to falling. Price inflation today stands at a teeny-weeny 1.2%.
It’s time for Senator Paul and daddy Congressman Ron Paul and their followers in gold-foil hats to admit that adding trillions to the money supply has not caused hyper-inflation.  After a quarter-century of hysterical warnings from the two Pauls, the hyperinflation spaceship never landed and little green dollar men did not eat up the planet.
An Idiot’s Guide to Gold-Buggery 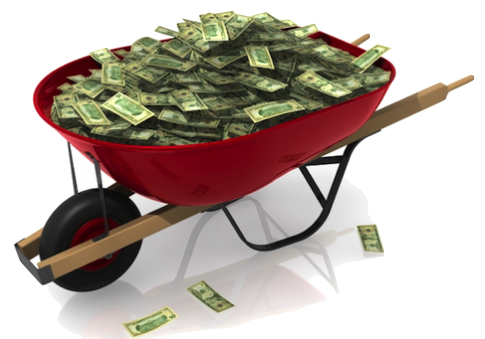 The Pauls have told us horror stories of the German hyper-inflation of the early 1920s when you had to schlep a wheelbarrow full of currency to buy a loaf of bread.  The cure Paul pÃ¨re hawks, is a return to the Gold Standard, raising Zombie economic theories from the grave where Friedman buried them.
As Friedman warned, there’s something far worse than having to pay for a loaf of bread with bags of currency, and that’s having to pay for a loaf of bread with a bag of gold.
Notably, the Tea Party, not the guys in the goofy wigs on Fox TV, but the real one in Boston in 1773, was formed principally to protest King George’s re-imposing the Gold Standard on the colonies.
The colonies faced a crisis.  Bricks of gold don’t have babies; and so, when an economy grows rapidly as did early America, there simply is not enough money to represent that new trade and wealth because the currency is limited by a fixed and arbitrary amount of metal.
Here’s why.  When the money stock stays flat as production and workforce grows, each dollar buys more of that production.  Sounds good?  No way.  A monstrous fall in prices and wages means workers and businesses get less for their output and can’t pay off old loans.  To simplify:  When a farmer borrows $100 for land and seed, then sells his corn for $50, the farmer goes bust.
The American colonies faced such ruin when gold-backed currency was insufficient to fund our massive expansion.  A revolutionary leader of the time explained the insurgent solution, “Happy for us that we fell upon the Project of giving a Credit to Paper.”
Happy days ended when the British Parliament counter-attacked with the Currency Act of 1764 that, “renders our Paper Money no legal Tender.”  King George, to shackle the States to the Crown’s metal-based currency, required purchasing a tax-stamp for each case of tea which had to be paid for in His Majesty’s “pounds sterling.”
So the dissidents threw the tea into the ocean.
A century and a half later, after World War I, the British Parliament did it again, re-imposing the gold standard.  The US and most of the world joined Britain in the golden noose.  Economies strangled and dangled.  The Great Depression eased only when FDR, in one of his first acts of office, rescued the US, setting the dollar free of gold and letting fly the “Federal Reserve Note,” created out of thin air ”” just like America itself.
And while your beloved Friedman did not care for the government caring for people’s welfare via New Deal programs, my professor did praise FDR’s printing press for expanding the money supply.
In today’s hearing, Janet Yellen might remind the Senate of economist J.M. Keynes warning about, “Madmen in authority, who hear voices in the air, distilling their frenzy from some academic scribbler of a few years back.”
Senator Paul, if you are going to listen to the voices of deceased economists, at the least, listen carefully.
* * * * * *
Forensic economist Greg Palast, author of the New York Times bestseller, Billionaires & Ballot Bandits, is a Puffin Foundation Fellow for Investigative Reporting.
Greg Palast is also the author of the New York Times bestsellers, , The Best Democracy Money Can Buy, Armed Madhouse and the highly acclaimed Vultures’ Picnic.
HELP US FOLLOW THE MONEY. Visit the Palast Investigative Fund’s store or simply make a tax-deductible contribution to keep our work alive!
Subscribe to Palast’s Newsletter and podcasts.
Follow Palast on Facebook and Twitter.
www.GregPalast.com

Dropboxes could only be placed INSIDE county offices and early voting stations. This sabotages the purpose of dropboxes — providing access to those with jobs or obligations that require voting outside business hours.

Great work here. 👇 I always wondered why DOJ did not file suit over the Georgia law. It seemed as if it was laced with racial suppression. But, I assumed there wasn’t sufficient cause to do so.
Again, great work Moses & Palast. Ty. https://twitter.com/greg_palast/status/1597704695103254528