Atlanta — Georgia’s Secretary of State Brad Raffensperger is no hero. Since the release of the tape in which Raffensperger is heard resisting Donald Trump’s bullying attempts to overturn Joe Biden’s victory, the Georgia politician has been portrayed as a defender of democracy.

The record says otherwise. Republican Raffensperger did all he could leading up to the election to suppress the rights of legitimate voters — including his overzealous, error-filled purge of more than 198,000 Georgians from the voter rolls before this year’s elections.

This wholesale attack on the right to vote was called out in a report issued in September by the American Civil Liberties Union (ACLU) of Georgia.

As principal investigator and author of the report, I can tell you I was stunned at the breadth of his office’s vote suppression tactics.

Indeed, Raffensperger has ducked and stalled to avoid a federal court’s admonition to correct the voter rolls and restore these Georgians’ rights.

And where did Trump get his ridiculous claim that Georgians were voting twice? This chestnut of disinformation came from Raffensperger himself. The GOP politician made this wild accusation of voter fraud two months before the November election, stating, Joe McCarthy-style, that he had proof that, “There are a thousand people who actually double voted” in the primaries. How many did the state ultimately name and arrest for this felony crime? Exactly none — zero.

Just a month ago, his office issued a rule that would allow counties to reject a new voter’s registration if the voter did not also have a car registered in Georgia. No car, no vote. Really?

This “emergency” rule was ostensibly proposed to prevent out-of-state residents from claiming a voting address in Georgia. But luckily, the NAACP got wind of this new trick — snuck in on a Sunday afternoon — and denounced it for what it was: a naked attempt to disenfranchise the “car-less,” students and the poor.

Hide and Seek With Voter Rolls

On December 2, Black Voters Matter, the Rainbow/PUSH Coalition and the Southwest Voter Registration Education Project sued Raffensperger to re-enfranchise more than 198,000 Georgians he’d removed from the voter rolls identified in the ACLU report.

A federal court requested the State meet with our team of experts to correct the “discrepancies” in Raffensperger’s purge list. That kicked off a game of hide-and-seek as the secretary of state ducked and stalled, effectively preventing these voters from casting a ballot in this do-or-die Senate run-off.

The game verged on the tragicomic. Two weeks ago, with the election looming, a team of the nation’s top civil rights attorneys joined LaTosha Brown of Black Voters Matter, announcing on the State Capitol steps that they were going to the secretary of state’s office for that meeting expected by the court. 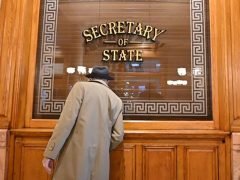 Raffensperger’s office was locked and dark, with the shutters closed.

Television cameras rolling, the attorneys marched past the busy governor’s office, past the Confederate statues, to Raffensperger’s office — which was locked, dark, with the shutters closed, with a phone number taped to the door. The number sent us to an answering machine.

On a hunch, the legal team, cameras in tow, set off on a hunt and found Raffensperger’s director of elections in another building. He simply refused to meet, or even set a meeting, knowing full well that the stall would keep tens of thousands of Georgians from casting their vote this Tuesday.

More troubling was the cause of the “error” that wrongly removed 198,351 voters from the rolls. They were removed on the grounds they had moved their residence out of their county or out of Georgia entirely. That sounds fair: If you don’t live in Georgia, you shouldn’t vote there.

But there was a problem: The state never checked the ultimate expert on where you live, the U.S. Postal Service (USPS). Confirming an address change with the post office is not just common sense — it’s the law. The National Voter Registration Act of 1993 says voters cannot be purged from voter rolls for moving without checking with one of the official USPS licensees who have access to the postal computers.

We gave Raffenperger’s “movers” list to three USPS licensees and they all came back with the same answer: 198,000 of these Georgians had never moved. And we contacted hundreds by phone, and videotaped many in the homes from which they supposedly had moved, including Ishver Diaz, Michael Watson and, in a prior purge, Christine Jordan, who is 94 years old. I met Jordan at the house from which she’d supposedly moved where she had a photo of herself and her cousin, Martin Luther King Jr., having dinner.

Despite being provided the names and addresses of the wrongfully purged, even video tape, Raffensperger refused to restore their rights before the run-off. For this resistance, rife with the scent of Jim Crow, Atlanta attorney Gerald Griggs dubbed him, “The Suppressor-in-Chief.”

It is troubling that, when confronted with his failure to check his movers list with the postal service, Raffensperger’s office claimed they had, in fact, obtained the list from an authorized licensee, Anchor Corp., one of only a couple dozen specialist mailing companies allowed to access the Postal Service computers.

But there is no record of their hiring Anchor. And I know they could not have, because my foundation, the Palast Investigative Fund, hired Anchor, one of three postal licensees that identified the wrongly purged.

Do “heroes” play games with federal courts to bend the outcome of an election? Before we lavish hosannas on partisan voting officials, let’s check the facts.