Power outage in New Orleans: Is Ida or Entergy to blame?

In the 1980s, I lead an investigation of Entergy, which runs the Louisiana power system My conclusion? “Entergy is a racketeering enterprise parading as a power company.”

After Katrina, I investigated their failure to get the lights back on in over a year.

This past week, Entergy lost 2000 miles of high-voltage line, which doesn’t happen in Bangladesh after a typhoon.

Entergy of Little Rock Arkansas, became a protected political juggernaut, even taking over the electricity system of London, after its lawyer Hillary Clinton somehow obtained influence with the White House.

Below is an excerpt on Entergy from my book Armed Madhouse: 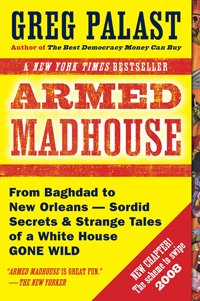 In 1986, I was hired by the City of New Orleans to check out suspicious doings by a corporation called “Entergy.” I flew in to meet City Councilman Brod Bagert, who is also New Orleans’s top trial lawyer and its most accomplished poet.

I called Bagert four months after the flood. Nearly half the city is still in the dark. The electric company, New Orleans Public Service, “NOPSI,” is owned by a holding company, Entergy, the company Bagert and I investigated in 1986.

Here’s what we found. In 1986, the New Orleans company was going broke because of the eye-popping cost of buying wholesale power — four times normal — from a company called Middle South Energy, charges they were passing right on to their captive customers in the city. Middle South is 100% owned and controlled by, you’ve guessed it, Entergy. But these were the days of government regulation, and government ordered an end to the shell game. Then came deregulation and the siphoning restarted with a vengeance. Busy shuffling loot from pocket to pocket, Entergy had neither the concern nor funds to harden their system against a hurricane.

But from the looks of it, and my own review of their accounts, their plan in case of the long-expected flood came down to “turn off the lights and declare their subsidiary bankrupt,” which they did three weeks after the hurricane. Negligent damage liabilities and rebuilding obligations were thrown into the Dumpster of the bankruptcy courts, and the holding company walked away.

But don’t worry, Entergy the holding company is doing quite well, posting a big 24% leap in earnings for the third quarter, a profit it attributes to “weather.” So who’s to blame for losing New Orleans?

The Palast Investigative Fund is making our half-hour investigative report, Big Easy to Big Empty: The Untold Story of the Drowning of New Orleans (produced for Democracy Now!) available as a free download.