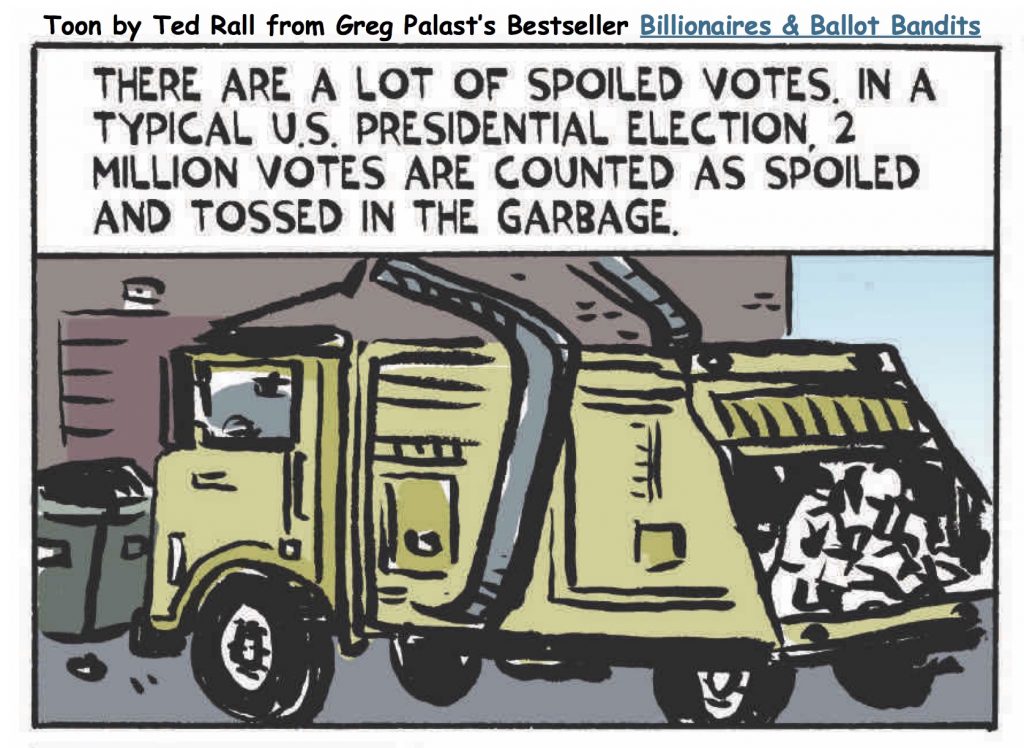 Listen in while Dennis J Bernstein and I take you through that ugly sausage factory called the American voting system.  Dennis J Bernstein and I have begun a weekly radio broadcast, The Best Democracy Money Can Buy:  The Election Crimes Bulletin, on his Pacifica broadcast, “Flashpoints.”
Don’t get Flashpoints in your area? then subscribe to the podcast, coming to you weekly.

[Los Angeles]  Woop!  Woop!  Alert!  Some California poll workers have been told to give “provisional” ballots to all independent voters in Tuesday’s Democratic Party.
That’s wrong.  That’s evil.  That’s sick and illegal.
Here’s the 411.  If you’re registered as an independent voter in California, you have the right to vote in the Democratic Presidential Primary.  Just ask for the ballot.
But look out!  Reports out of Orange County are that some poll workers have been told to give “No Party Preference” (NPP), that is, an independent voter, a PROVISIONAL ballot, as opposed to a regular ballot.
Do NOT accept a provisional ballot. As one poll worker told me, “They simply don’t get counted.”
Who would benefit from this switcheroo from legal ballot to “provisional” ballot?  It’s just a stone cold fact that independent voters favor Senator Bernie Sanders. Among voters who describe themselves as having “no party preference,” Sanders leads Sec. Hillary Clinton by a humongous 40 points””though Hillary is hugely ahead among registered Democrats.
So one way to steal the election is to make sure those independent voters’ ballots end up in the garbage, uncounted.
Two million “Placebo Ballots” not counted
And for our readers in the other 49 states:  you can bet that the GOP will be shunting voters to these placebo provisional ballots in November.  In the last presidential

It’s almost done ”” The Best Democracy Money Can Buy, The Movie ”” Help me finish it with a itty-bitty $25 donation and I’ll send you, signed, my comic book, Steal Back Your Vote, with the 7 ways to beat the ballot bandits.  Make it a tax-deductible $100 donation and I’ll put your name in the credits.  And you’ll save the nation.  A bargain!

election, over two MILLION voters, overwhelmingly  voters of color, were shifted to these rarely-counted ballots.  Two million voters could have justwritten their votes on bubbles.  That’s how they steal elections.
No, I’m not promoting Bernie nor my uncle Ernie, nor anyone.  I’m promoting democracy.  Let’s make sure your vote counts.
What is a “Provisional” ballot?  “Provisional” ballots were created by George Bush and Karl Rove as part of the Help America Vote Act (HAVA) after they swiped Florida in 2000.
The original idea of provisional balloting was sound: The Congressional Black Caucus was very upset that African-Americans were not able to vote in 2000 in Florida because they were falsely removed from the voter roles for all kinds of cockamamie reasons. So the Black Caucus proposed that, if your name is not on the voter roles, you should still be able to vote provisionally. The state can then check the records and count your vote later.
The Black Caucus won the right to a provisional ballot, but didn’t win the right to have them counted. They rarely are.
Say you are tagged an “inactive” voter, you CANNOT get your provisional ballot counted even if you were wrongly listed as “inactive.”  You’ve been removed from the register.  So, it’s a Catch-22.  You get a provisional ballot because you were wrongly left off the voter roll, but it can’t be counted because, well, you’re not on the voter roll.
And that’s why I call provisional ballots “Placebo” ballots.   They let you feel like you voted, but you haven’t.  It’s ridiculously easy to challenge a provisional ballot – so in a tight race, it’s just tossed out.

California Reamin’
I am currently reporting from Southern California, and I got a tip from Ashley Beck, a poll worker in conservative Orange County . Listen to her story.  She was being trained with other poll workers, and they were given some very strange information.
“I was told that all NPP [independent] voters are to be given provisional ballots. I was bothered by that, because I was always told that NPP voters in California can vote for Democrats and their vote would be counted.  I was a little worried that he was telling all 18 of us poll workers to give all NPP voters provisional ballots. We all know what happens most of the time with provisional ballots. They are not being counted.”

Provisionally Black
Who gets these placebo ballots?
I was on a book tour in Palm Springs””with an audience of about 200. I asked, “Has anyone here ever gotten a provisional ballot?” The only two Black people in the room both raised their hands, and that was it.
Black people know what provisional ballots are, and they probably know that if they fill one out, the chance of it getting counted is slim.
With the attempt to steal votes by giving independent voters provisional ballots; a lot of white people are being treated as if they turned Black. So to Bernie voters experiencing vote suppression for the first, welcome to the United States of Apartheid voting.
*   *   *   *   *   *
Greg Palast (Rolling Stone, Guardian, BBC) is the author of The New York Times bestseller, The Best Democracy Money Can Buy, which will be released as a feature documentary movie this fall. Find out how to Steal Back You Vote, and make sure it counts, by downloading our FREE election protection comic.
Subscribe to Palast’s mailing list and Podcast to receive regular updates on this issue.
Visit the Palast Investigative Fund store or simply make a tax-deductible contribution to keep our work alive!
GregPalast.com