The Pig That Burst The Keystone Pipeline 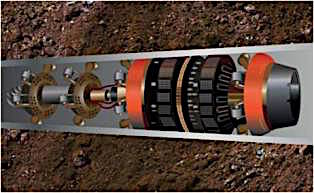 Yesterday, the Keystone pipeline cracked and dumped 210,000 gallons of oil onto the South Dakota prairie.
Here’s the reason the pipeline burst: the PIG didn’t squeal. The PIG, the Pipeline Inspection Gauge, is sent through the Keystone to check for evidence of any leak, failure, or corrosion that will cause it to burst. But the PIG didn’t squeal a warning. Why not?
Because, as disclosed in my investigation for Britain’s investigative TV series Dispatches in 2010, the PIG has been silenced, its software jacked and hacked by a company that provides PIGS. The software is deliberately set to reduce the warning signals and thereby cut costs of replacement and repair by billions of dollars on the Keystone and other pipes.
We warned you. In the Dispatches report, in our print reports, and in the “The Pig in the Pipeline“, a chapter in Vultures Picnic.
No oil or gas pipeline should ever leak, burst or explode if the PIG is working as it should. Absent of sabotage, pipelines don’t just suddenly crack and break. The signs of thinning of the walls, small warning leaks, corrosion, failing gauges, should all provoke the PIG to squeal. (Technically, the issue is the software that analyzes the billions of data points transmitted by the PIG, which looks like ”well, a pig”, as it travels through the pipe.)
We have obtained independent confirmation from three software engineers who designed the PIG “warning” system.

*  *  *  *  *  *
[Prior to turning to investigative reporting, Palast directed the investigation of pipeline explosions for the Attorney General of Illinois and, as a private investigator for the Alaskan Native Corporations, the operation of the Alaska Pipeline and oil shipping system. ]
Greg Palast (Rolling Stone, Guardian, BBC) is the author of The New York Times bestsellers, The Best Democracy Money Can Buy and Billionaires & Ballot Bandits, out as major non-fiction movie: The Best Democracy Money Can Buy: The Case of the Stolen Election (the brand new, updated, post-election edition). Watch the movie and get the info on the Keystone Pipeline
Stay informed, get the signed DVD, a signed copy of the book companion – or better still, get the Book & DVD combo.
Visit the Palast Investigative Fund store or simply make a tax-deductible contribution to keep our work alive! Alternatively, become a monthly contributor and automatically receive Palast’s new films and books when they’re released!
Or support the The Palast Investigative Fund (a project of The Sustainable Markets Foundation) by shopping with Amazon Smile. AmazonSmile will donate 0.5% of your purchases to the Palast Fund and you get a tax-deduction! More info.
Subscribe to Palast’s Newsletter. Follow Palast on Facebook and Twitter.
GregPalast.com