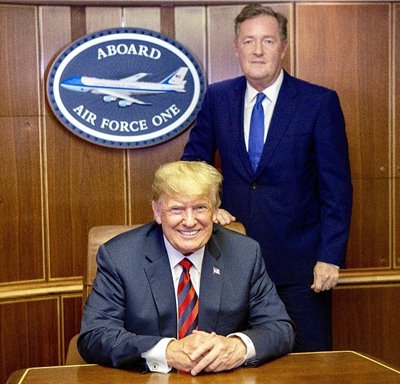 I say, “a few days off” because British and US media moguls’ love affair with Morgan has kept this racist piglet on prime time for decades, putting their wallets where there ethics should be.

Piers undoubtedly thought that, by attacking a woman of color, he was protected by the latent racism in some Little Englanders’ reaction to a royal marrying someone of the “wrong” skin tone.

Does this sound personal? Oh, believe me, it is. Let’s go back to July 1998 when Moron was editor of a tits-and-tattle rag called, The Mirror, and ran an entire front page consisting of a photo of a reporter under the headline, bigger than “Hitler Defeated,” screaming, “THE LIAR.” 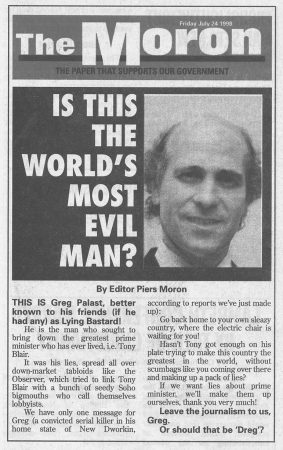 That was the first of several front page attacks on me as an investigative reporter for The Guardian and its Sunday paper, The Observer. I’d gone undercover and secretly recorded lobbyists who detailed new Prime Minister Tony Blair’s inner circle’s tawdry little dealings selling influence and government secrets to Rupert Murdoch, Goldman Sachs, Enron and other corporate pirates.

To defend his patron Blair, Morgan went on a crusade, with several front page assaults, in a failed attempt to discredit my investigation. (So, when he called the Duchess of Sussex a liar, for me, it was déjà vu all over again.)

Luckily, in 1998, I had the audio tapes. Frustrated by facts, Morgan then fabricated a nonexistent sex scandal — no kidding. When his fake story was exposed, the Press Complaints Commission, a group of useless, pinhead press babysitters, was supposed to investigate, as they now promise to do over his cruel attack on Markle.

But they will do as they’ve always done in the umpteen investigations of Morgan: a pat on the wrist as he goes to his next million-dollar job — because their bosses see dollar signs in Piers’ lying lips.

Here are just a few highlights of Morgan’s one-man crime-wave. And when I say “crime,” I do mean acts that would, under US law, have put this creep-o away for many years. Here’s a few from my 2013 Vice series on Morgan:

Illegal wiretapping: Morgan paid a trickster, faking Paul McCartney’s voice, to hack into the phone of Sir Paul McCartney’s wife and stole some highly personal, and highly valuable, information — the type of gossip used to sell Morgan’s grotty little scandal sheet, The Daily Mirror. The idea of Piers listening in on private phone messages, is too creepy to think about. But he did it. Often. Electronic burglary for profit is a felony crime in the UK and USA both. While executives from News of the World were arrested for knowing about taps on celebrities, Piers was not.

Insider trading: Two of Morgan’s influential financial columnists would make recommendations to the rubes reading The Mirror. Morgan and his so-called reporters bought the stocks just before they would print the names of their picks — which would, after publication, immediately shoot skyward. Morgan pocketed tens of thousands of pounds. His co-conspirators, the reporters, got jail time. Not Piers. He admitted to the profiteering and walked away with a laughable fine.

Morgan was given a visa to the US to appear on his bud Donald Trump’s Celebrity Apprentice, and then another special “genius” visa to take over Larry King’s show on CNN — despite the clear prohibition in the Antiterrorism Act of 1996 which bars work visas to those who have admitted to “the essential elements of a crime” including fraud and white collar felonies involving more than $10,000. The US Ambassador to the Court of St. James, Louis Susman, former Vice-Chairman of Citibank, used his “discretion” to ignore Morgan’s confessed crime — at a time when the US deported over 100,000 immigrants under the Act for such crimes as having a little weed in their car.

Want to understand how the system works? The Vice photo of Ambassador Susman yucking it up with Piers at his CNN launch party says it all. 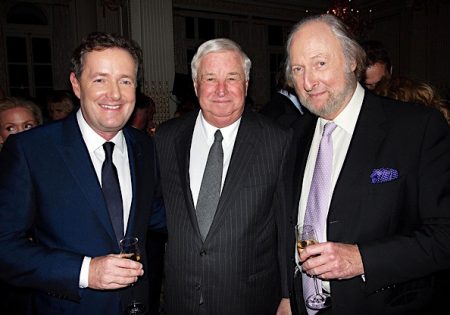 In 2004, as a so-called news editor, Morgan was caught running fake photos of torture in Iraq. The man has no bottom. But neither do the media lords who love him.

So, expect to see Morgan back on air because the landlords of our airwaves know that no one’s ever lost ad sales promoting fakery and dog-whistle racism.

This commentary is based on the original 2013 investigative series for Vice, “Aaron Swartz died for Piers Morgan’s sins.”