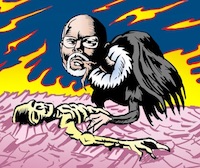 While Donald Trump and Kim Jong Un are playing double-or-nothing with the survival of Koreans, Trump’s billionaire sugar-daddy is taking advantage of political upheaval to attempt a seizure of one South Korea’s major employers: Hyundai Motor. Paul Singer, known as The Vulture, is mounting an attack on the auto-maker known for providing life-time union-wage employment for workers. Putting worker welfare on a par with profits infuriates Singer. He sees them as fat targets ripe for takeover and tearing apart.
In our film, The Best Democracy Money Can Buy, we explain how Singer, his Vulture Fund called “Elliott Management,” and Singer’s cronies took over the General Motors auto parts operation (Delphi) ”” then closed almost every factory, ended all union jobs, and reopened the factories in China.
Here is my interview with Korea’s main newspaper, Chosun Ilbo.
Singer’s goons have said they, “have a file on Greg Palast.” As you can see, I have a file on HIM
U.S. Hedge Fund Raiding Hyundai Accused of ‘Vicious Tactics’
By Ryu Jung
A veteran U.S. investigative reporter has accused the hedge fund currently assailing Hyundai Motor of “vicious tactics” to make a fast buck. Greg Palast (66), who has spent more than a decade reporting on Elliott Management, warned about Paul Singer, the head of the US$34-billion fund.
“There are other vulture funds that operate like Elliott, but few in the finance industry can match the ruthless reputation of Singer funds,” Palast said.
In his books, “Vultures’ Picnic” and “Billionaires & Ballot Bandits,” Palast describes how Elliott’s investments into Argentina were related to its bankruptcy and how some of the international aid money intended to bring clean drinking water to children in the Congo went to his fund.
According to Palast, Elliott bought US$100 million worth of sovereign bonds issued by Argentina in 2001, when the country was nearly bankrupt, and sold them for $2.4 billion in 2016. Elliot also invested in distressed bonds issued by Congo and pursued full payment through the courts.
Elliott likes to portray itself as an advocacy group that merely wants to improve “shareholder value,” but Palast refers to it throughout as a “vulture fund.”
The Chosun Ilbo asked Palast about Elliot’s motive in pushing against planned corporate governance reforms at Hyundai.
“Singer believes in getting into a company (or nation) quickly, and leaving as quickly as possible with a massive cash gain,” Palast said. “I would ask Koreans to look at what he did to Delphi auto workers in America – because that is the future of Hyundai under Singer’s control.”
According to Palast, Singer and his partner acquired a controlling stake of 18 percent in Delphi in 2009, when the car parts maker was in financial trouble, only to get rid of the company’s labor union, move 35,000 jobs to China and scrap workers’ pensions. The number of Delphi’s plants in the U.S. and Canada shrank from 45 to four, and only 1,500 part-time workers were left in North America. In just one year, Elliott made a W1 trillion profit from the raid (US$1=W1,081).
“Singer despises labor unions and long term guarantees of employment,” Palast said. He predicted that if it gains control of Hyundai, Elliott will move its factories to China and Vietnam and dismantle its labor union.
“He doesn’t care if the company (or nation) that remains is now wrecked, cash-short and unable to operate or withstand future shocks. And he certainly doesn’t care whatsoever about the workers and communities affected by his stripping his targets of cash,” he added.
When asked why he thinks Elliot is targeting Hyundai after failing to get hold of Samsung in 2015 and 2016, Palast said, “Singer particularly finds Korean chaebols a tempting target. They are fat with cash held for the long term, protected by government, generally have well-paid union workers and have deep connections to Korean society.”
In other words, the fund might ride a wave of anti-chaebol sentiment among Koreans to justify its maneuvers to make profits out of the automaker.
“It is true that Hyundai and other chaebols have been corrupt, bribe government, unfairly enrich founding families and ignore common shareholders,” Palast said. “On the other hand, Hyundai’s management and founders are committed to maintaining high-paid union employment in Korea and act fairly to workers in the U.S. and other major markets.”
“I do not think that Koreans should adopt to the ‘global standard’ which now is too close to Singer’s standard — profits must always come first,” he said. “Look what happened to Detroit, the car-making center of America, after Singer and his vulture friends seized the city, its auto factories and its housing market: it is devastated, massive unemployment, empty destroyed houses, bankrupt cities.”
Regarding Elliot’s lawsuit against the Korean government demanding W700 billion in damages for supporting the merger between Samsung C&T and Cheil Industries that handed control to heir Lee Jae-yong, Palast said, “Paul Singer is a lawyer — and he loves to use frightening litigation as a hammer.” The National Pension Service, the largest shareholder at the time “acted in the best interests of your nation in the face of Singer’s history.”
Palast warned that Elliot’s money could be used to Korean politicians. “Singer believes in using political pressure and large donations to politicians and political organizations to get his way,” he said. “Be careful of Singer funds entering your political system directly or indirectly.”
When asked how Korea could defend itself against attacks by vulture funds, Palast advised, “Expose Singer and vulture history and operations… While Korean shareholders deserve democratic rights, your nation is entitled to have jobs guarantees written into company charters.”
Read this article in Korean.