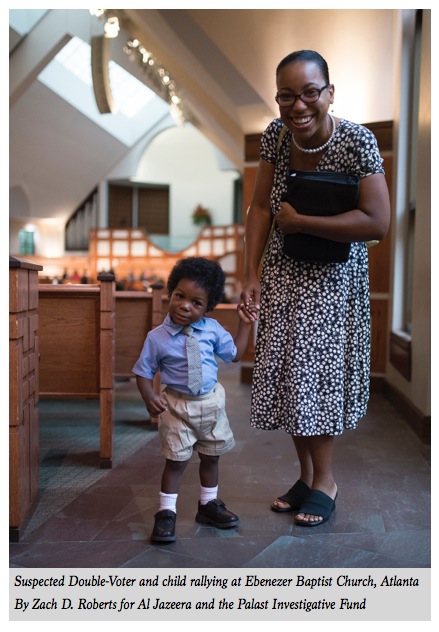 NEW YORK – Greg Palast wins the December Sidney Award for “Jim Crow Returns,” and “Challenging Crosscheck,” a two-part Al Jazeera America expose that shows how millions of innocent people were flagged as suspected vote fraudsters just because they have the same first and last name as someone in another state.
On the eve of the 2014 elections, officials had begun to purge voters based upon Interstate Crosscheck, voter fraud prevention software. More than 40,000 voters were dropped from the rolls in Virginia alone.
Read The Backstory, our Q&A with Greg Palast
The Crosscheck program, used in 28 states, is ostensibly designed to prevent voter fraud by identifying people who voted in different states in the same election. The system is billed as a sophisticated fraud-detection tool, but Crosscheck lists obtained by Palast for three states show that the system matches on first and last name alone. Crosscheck flagged more than 2 million names in those three states, Palast found.
“It was absolute murder trying to get the Crosscheck lists out of the hands of these highly political agencies,” Palast said. “They knew damn well the lists were phonies””just common ethnic names, an excuse to knock off Democrats””and dynamite if exposed.”

One more prize and we’re bankrupt!
I am truly honored to receive this prestigious award. But that don’t pay the bills. It took six months of a team of six of us to lift the Crosscheck purge lists from the locked file cabinets of Secretaries of State who’d make Katherine Harris look like Thomas Jefferson.

We have ambitious plans for 2015, with investigations insanely difficult (and none too cheap) to execute.
Next: Our latest from our Billionaires & Ballot Bandits investigation will be released as a print series and FILM.

Please support the continuation of this crucial work with tax-deductible donation to the Palast Investigative Fund.
And we need 12 Donors who can give $1,000 or more.
You will get a Producer credit in the new film.

If you ever thought of helping, now is truly the moment.
With appreciation and holiday wishes – Greg and the team

In the states Palast studied, anyone with a common name is at risk, but the system disproportionately flags voters of color: If you’re white, you have a 1 in 11 chance of being flagged. If you’re Asian or Hispanic, your odds are 1 in 8. If you’re black, the odds are 1 in 7 that someone in another Crosscheck state shares your first and last name.
Check Al Jazeera’s interactive database to see if your name is in on the list.
“Greg Palast has uncovered a major threat to voting rights,” said Sidney judge Lindsay Beyerstein. “Crosscheck is casting unwarranted suspicion on innocent people and endangering their right to vote.” 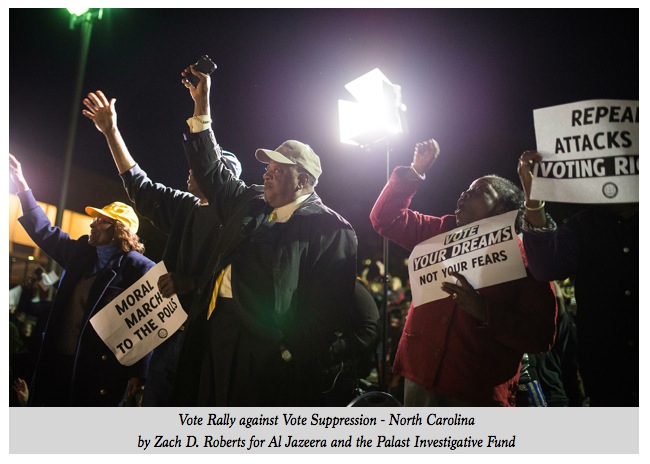 Greg Palast produces investigative reports for the Guardian, BBC TV, and other outlets. Before becoming a reporter, he was an investigator of corporate crime and racketeering for governments and labor unions worldwide. He is the author of several books including “The Best Democracy Money Can Buy” and “Vulture’s Picnic.”
“Jim Crow Returns” was produced by Alex Newman, Steve Melendez, Tate Strickland, John Thomason, and Lam Thuy Vo, edited by Mark Rykoff and Jayati Vora, with photographs by Zach D. Roberts and interactive production by Alex Newman.
Al Jazeera America’s broadcast of “Crosscheck” was produced by Hanaan Sarhan, with Richard Rowley as director of photography.
*  *  *  *  *  *  *
The Sidney Hillman Foundation honors excellence in journalism in service of the common good. Judges are Rose Arce, Ta-Nehisi Coates, Hendrik Hertzberg, Katrina vanden Heuvel, Harold Meyerson and Lindsay Beyerstein.
The Sidney Award is given once a month to an outstanding piece of journalism about social or economic injustice, by the Sidney Hillman Foundation, which also awards the annual Hillman Prizes every spring. Winners of the Sidney receive a certificate designed by New Yorker cartoonist, Edward Sorel, a $500 honorarium and a bottle of union-made wine.
*  *  *  *  *  *  *
For 15 years, Greg Palast has been uncovering voter suppression tactics in investigative reports for BBC Television, The Guardian, Harper’s and Rolling Stone.
Greg Palast is the author of several New York Times bestsellers including The Best Democracy Money Can Buy and Billionaires & Ballot Bandits.
Make a tax-deductible donation and support our ongoing investigation into voter suppression.
Subscribe to Palast’s Newsletter and podcasts.
Follow Palast on Facebook and Twitter.
www.GregPalast.com