On August 6, 2017, investigative journalist Greg Palast was presented with the Eleanor Roosevelt Award by the Southern California branch of Americans for Democratic Action, an organization which the former First Lady co-founded in 1947.
The award was given to Greg for his: “Superlative investigative reporting and media coverage in the areas of human and democratic rights.”
“What an honor to get the Eleanor Roosevelt Award, because in my house she was our goddess,” said Palast at the awards ceremony, which was held in the grounds of a private home in Santa Monica.
“I always think of Adlai Stevenson’s words at her memorial,” Palast continued. “He said, Eleanor Roosevelt would rather light a candle than curse the darkness. And I think that all I do is curse the darkness. That’s my business. I’d be out of a job if it wasn’t for cursing the darkness. ”
Jan Goodman of ADA SoCal, who opened her home for the ceremony, presented Palast with the award, which she said was given to Palast for “reporting on human and democratic rights.”
“It’s become your life’s work, and we are joining you in your life’s work, because this is what ADA is all about also,” said Goodman as she handed a bronze statue of Roosevelt to Palast. 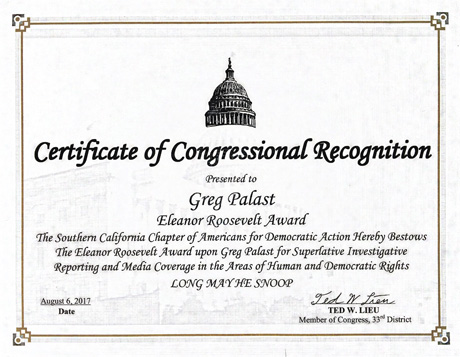 The award was presented with a Certificate of Congressional Recognition from Congressmen Ted W. Lieu honoring Palast, which stated: “Long may he snoop.”
Palast would like to dedicate this award to Tundu Lissu, who helped him expose the Barrick Gold scandal, and all the other whistleblowers who have put themselves on the line to help journalists curse the darkness.
***
Greg Palast (Rolling Stone, Guardian, BBC) is the author of The New York Times bestsellers, The Best Democracy Money Can Buy and Billionaires & Ballot Bandits, now out as major non-fiction movie.
Stay informed, get the signed DVD, a signed copy of the companion book – or better still, get the Book & DVD combo.
Visit the Palast Investigative Fund store or simply make a tax-deductible contribution to keep our work alive! Alternatively, become a monthly contributor and automatically receive Palast's new films and books when they're released!
Or support the The Palast Investigative Fund (a project of The Sustainable Markets Foundation) by shopping with Amazon Smile. AmazonSmile will donate 0.5% of your purchases to the Palast Fund and you get a tax-deduction! More info.
Subscribe to Palast's Newsletter. Follow Palast on Facebook and Twitter.
GregPalast.com