It’s true. It’s weird. It’s nuts. The Department of Homeland Security, after a five-year hunt for Osama, has finally brought charges against… Greg Palast. I kid you not. Send your cakes with files to the Air America wing at Guantanamo.
Though not just yet. Fatherland Security has informed me that television producer Matt Pascarella and I have been charged with unauthorized filming of a “critical national security structure” in Louisiana.

On August 22nd, for LinkTV and DemocracyNow! we videotaped the thousands of Katrina evacuees still held behind barbed wire in a trailer park encampment a hundred miles from New Orleans. It’s been a year since the hurricane and 73,000 POW’s (Prisoners of W) are still in this aluminum ghetto in the middle of nowhere. One resident Pamela Lewis said, “It is a prison set-up” — except there are no home furloughs for these inmates because they no longer have homes.
To give a sense of the full flavor and smell of the place, we wanted to show that this human parking lot, with kids and elderly, is nearly adjacent to the Exxon Oil refinery, the nation’s second largest, a chemical-belching behemoth.
So we filmed it. Without Big Brother’s authorization. Uh, oh. Apparently, the broadcast of these stinking smokestacks tipped off Osama that, if his assassins pose as poor Black folk, they can get a cramped Airstream right next to a “critical infrastructure” asset.
So now Matt and I have a “criminal complaint” lodged against us with the feds.
The positive side for me as a journalist is that I get to see our terror-busters in action. I should note that it took the Maxwell Smarts at Homeland Security a full two weeks to hunt us down.
Frankly, we were a bit scared that, given the charges, we wouldn’t be allowed on a plane into New York last night. But what scared us more is that we were allowed on the plane.
Once I was traced, I had a bit of an other-worldly conversation with my would-be captors. Detective Frank Pananepinto of Homeland Security told us, “This is a ‘Critical Infrastructure’… and they get nervous about unauthorized filming of their property.”
Well, me too, Detective. In fact, I’m very nervous that this potential chemical blast-site can be mapped in extreme detail at this Google Map location. 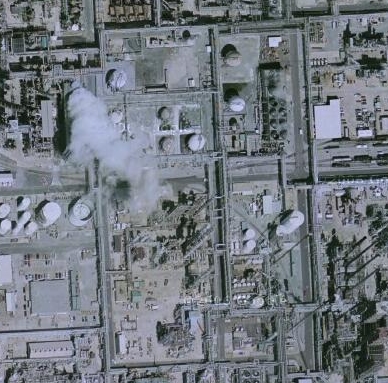 What also makes me nervous is that the Bush Terror Terriers have kindly indicated on the Internet that this unprotected critical infrastructure can be targeted — I mean located — at 30 29′ 11″ N Latitude and 91 11′ 39″ W Longitude.
After I assured Detective Pananepinto, “I can swear to you that I’m not part of Al Qaeda,” he confirmed that, “Louisiana is still part of the United States,” subject to the First Amendment and he was therefore required to divulge my accuser.
Not surprisingly, it was Exxon Corporation, one of a handful of companies not in love with my investigations. [See “A Well-Designed Disaster: the Untold Story of the Exxon Valdez.”]
So I rang America’s top petroleum pusher-men and asked their media relations honcho in Houston, Marc Boudreaux, a simple question. “Do you want us to go to jail or not? Is it Exxon’s position that reporters should go to jail?” Because, all my dumb-ass jokes aside, that is what’s at stake. And Exxon knew we were journalists because we showed our press credential to the Exxon guards at the refinery entrance.
The Exxon man was coy: “Well, we’ll see what we can find out… Obviously it’s important to national security that we have supplies from that refinery in the event of an emergency.”
Really? According to the documents our team uncovered from the offices of Exxon’s lawyer, Mr. James Baker, the oil industry is more than happy to see a limit on worldwide crude production. Indeed, the current squeeze has jacked the price of oil from $24 a barrel to $64 and refined products have jumped yet higher — resulting in a record-busting profit for Exxon of nearly $1 billion per week.
So this silly “criminal complaint” has nothing to do with stopping Al Qaeda or keeping the oil flowing. It has everything to do with obstructing news reports in a way that no one would have dared attempt before the September 11 attack.
Dectective Pananepinto, in justifying our impending bust, said, “If you remember, a lot of people were killed on 9/11.”
Yes, Detective, I remember that very well: my office was in the World Trade Center. Lucky for me, I was out of town that day. It was not a lucky day for 3,000 others.
Yes, I remember “a lot” of people were killed. So I have this suggestion, Detective — and you can pass it on to Mr. Bush: Go and find the people who killed them.
It’s been five years and the Bush regime has not done that. Instead, the War on Terror is reduced to taking off our shoes in airports, hoping we can bomb Muslims into loving America and chasing journalists around the bayou. Meanwhile, King Abdullah, the Gambino of oil, whose princelings funded the murderers, gets a free ride in the President’s golf cart at the Crawford ranch.
I guess I shouldn’t complain. After all, Matt and I look pretty good in orange.
*******
A personal request to readers. Many have written to ask what can be done to protect Matt and me from becoming unwilling guests of the State.
First, this ain’t no foolin’ around: Matt and I are facing these nutty charges. So spread the info. We believe that getting the word out is the best defense.
Second, call Homeland Security and turn us in. They seem to have trouble finding us. If you get a reward, you may choose to donate it to the Palast Investigative Fund, a 501(c)(3) educational foundation which supports our work and pays our legal fees.
Third, ask your local library to order our book, Armed Madhouse: Who’s Afraid of Osama Wolf? Homeland Security now reserves the right to read over your shoulder at the library; therefore, the more our agents are forced to read this subversive material, the more likely we can convince them to come in out of the cold. All kidding aside, we do ask you to request your library order the book: not everyone can afford to purchase this hardbound edition.
Our thanks to Amy Goodman at Democracy Now! and the folks at LinkTV for broadcasting our report from New Orleans and the Exxon refinery. And to Gil Nobel, host of ABC Television’s Like It Is, our Courage in Journalism award for broadcasting our report on his network’s New York affiliate. Catch Gil on WABC every Sunday at noon.
In response to a deluge of requests for a copy of the New Orleans documentary, we are preparing a DVD which you may order right now at http://gregpalast.com/premiums.htm .