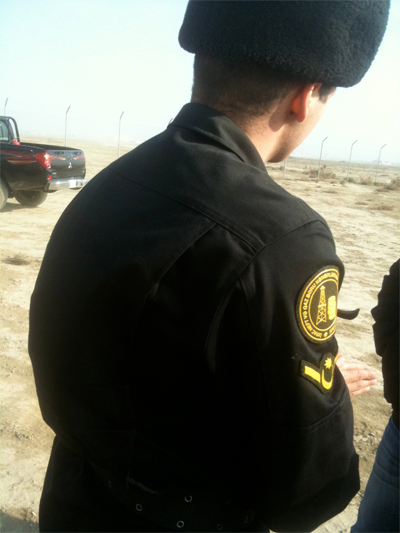 “Here in Azerbaijan we believe in human rights. PLEASE GIVE US YOUR FILM.”
Oh, no, no, not good.
The enforcers here come in three colors:  the military police still wearing their old Russian puke-green uniforms, the MSN (the dictator’s secret police) in windbreakers without ID, and BP’s own corporate police force in black tunics, sashes and full hats who look like toy soldiers from the Nutcracker ballet. They weren’t dancing.
I showed all three flavors of police our press credentials in both English and Azeri, neither of which could be read by the officers. (The dictator had suddenly changed the Azeri alphabet, making most of the nation illiterate overnight.)
The dictator made everyone call him, “Baba,” Grandpa.

I told the dumbest-looking one, “Look here: This paper says your so-called President is a weasel’s rectum,” which our ‘fixer’ translated as, “This letter from Foreign Ministry is authorization to make a documentary for the British Television.”
We’d been surreptitiously filming BP’s cancer-making machine,
the giant pipeline terminal near Baku, the capital, that sends Azeri’s Caspian Sea oil eastward to light Europe’s Christmas trees.
Now, it looked like I’d be spending Christmas in Baba’s dungeon licking rats for breakfast. My clown-show antics bought the crew the precious minutes needed to switch the film in the camera to blanks.  Our cameraman told a BP cop, with mime: “Hadn’t begun filming yet, Old Bean.”
We would now. I clicked on my hidden micro-cam. 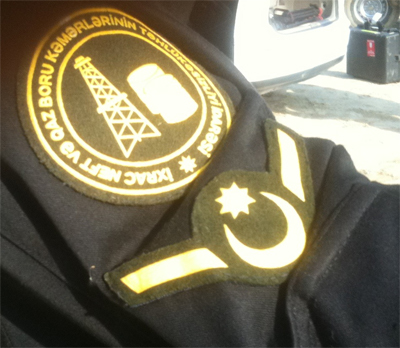 A black SUV arrived on the remote desert track and unloaded its impressive cargo, a colonel sprinkled with medals from the recent war Azerbaijan lost to Armenia. The colonel said, “British Petroleum drives this country,” and as a “British” journalist, he thought I’d be as proud of that fact as he is.
“I know,” I said. “Believe me, I know.”
There is an awful lot of evidence that BP and Britain’s MI6 had their hands in Baba’s 1993 coup d’etat which overthrew the nation’s elected president. Within months of taking power, Baba signed “The Contract of the Century” giving BP monopoly control of Azerbaijan’s Caspian reserves.”
Baba headed the KGB when this Islamic land was an occupied “republic” of the Soviet Union, the good old days of relative peace, freedom and prosperity.
I was here in the desert to investigate a tip-off I’d had that BP had covered up a near-disaster at its Caspian offshore rig that was extraordinarily similar to the Deepwater Horizon blow-out. But BP covered it up.
What I didn’t know was that WikiLeaks was about to release a State Department memo which referred to a small piece of this BP game. Rather than go to Azerbaijan to check the facts, the Wiki newspapers called BP in London for comment.
That put BP on high alert and my sources in high danger.
So the Baba-BP police were more than curious about our film which we promised was about nothing more than, “the business boom in Central Asia.” Of course, we didn’t add that the only business booming here is corruption and BP’s oil drilling. (I don’t use the plural here because it is a single industry.) 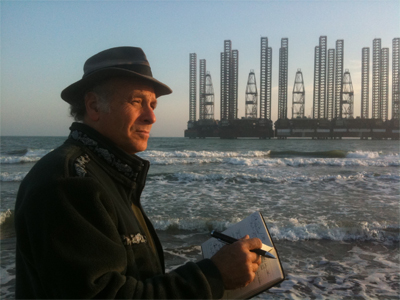 How the crew and I (and the poor shepherd on a little horse swept up with us) were released is a complex story involving an impromptu banquet with the Secret Police and the poignant recanting of a statement about BP made to us by an environmental activist.
I understood his need to back down. The night before, we dined with a young video blogger who’d just gotten out of prison after the current president (now Baba’s son, Baby Baba), saw the blogger hold a press conference in a donkey suit. The President had no doubt that he was the ass. He was. He is.
Welcome to the Islamic Republic of BP, otherwise known as Azerbaijan. And good-bye.
I’m out of there. Out with the evidence we need about BP and how it lead to the Gulf of Mexico blow-out and an extension of the occupation of Iraq.
It’s a hell of a story, and my holiday gift to myself is that I’m here and ready to tell it.
My best wishes to you and your family.
***
Won’t you please support this work, the “Arctic to Amazon investigation”?
I need seven more committed folks to make a tax-deductible donation of at least $1000 to cover the remaining work. Donate at least $1,000 and we will, with your approval, list you as a co-producer in the video version of this important film already scheduled for broadcast everywhere but the USA.
And we MUST bring it to America. That will require more help for the US production and print reports.  Don’t have $1,000 or $5000?  All donations to the Palast Investigative Fund are tax-deductible and keep us going.
We had to leave the secret filming equipment in Baku, Azerbaijan’s capital; we were warned by a friend plainclothesman that they knew I had it and needed to ditch it.
I’ve now taken our crew from the Amazon rainforest to BP’s next drilling target above the Arctic Circle, to Africa and now to Central Asia.  We must now go to he most dangerous locales yet:  deepest darkest Washington DC, and London, home to BP, whose natives are heavily armed with lawyers and PR bullshit.
Please help me drill down to the truth with your tax deductible donation to the Palast Fund.  Donations of $50 or more receive, if you wish, a gift I will sign.  (Make the request today or tomorrow, Dec. 21, and I’ll send it priority within 12 hours.)
Three big European networks have combined to cover our travel costs and some filming; but none have the money to support the deep investigation, the endless hours of research, that provide the hard facts on which the filming must be based.
Special, exceptional thanks go to the Cloud Mountain and Puffin foundations for their faith in our work and all our 2,000 supporters who have sent us donations – and information – on which we survive.
Peace on Earth, Goodwill to All … and to all, a good night.
Greg Palast, reporting from … somewhere safe.
***
Greg Palast is an investigative journalist and the author of the New York Times bestsellers Armed Madhouse and The Best Democracy Money Can Buy. His reports can be seen on BBC Newsnight.
Subscribe to Palast’s Newsletter and podcasts.
Follow Palast on Facebook and Twitter.
GregPalast.com