Greg Palast, joined by ACLU of Kansas, launches nationwide legal attack on Trump’s claim that millions of people have voted twice illegally.
Palast is the Rolling Stone journalist who broke the original story that thousands of voters in 29 states lost their right to vote because of Trump’s phony double voter claim.
Palast is the only US journalist with the names of more than 1,000,000 of the accused voters obtained in a years long investigation for Al Jazeera and Rolling Stone, an investigation which won the prestigious Global Editors award. 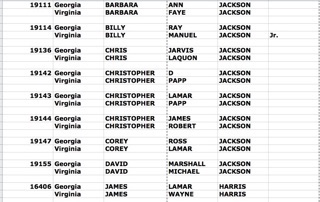 Palast is working alongside the ACLU of Kansas because the “double-vote” list was created by Trump “vote fraud czar” Kris Kobach as part of his “Interstate Crosscheck” program. Used by 29 states, almost all GOP controlled, voting officials have secretively challenged and purged thousands of voters from voter rolls in Ohio, Michigan, Arizona, Oklahoma and other states.
Palast’s team of experts has determined that the purge list is overwhelmingly biased against Hispanic, Asian-American and Black voters.
As the Brennan Center for Justice has noted, citing Palast’s work, nearly one in seven Hispanic voters in the Crosscheck states are targeted because Kobach and Trump only match first and last names of voters. For real example, Billy Ray Jackson is supposed to be the same voter as Billy Manuel Jackson Jr.. (Photo from an unedited confidential Crosscheck list obtained by Palast for Rolling Stone.)

I haven’t asked for nearly a year, but I must: We are running low on funds just as we’re about to launch a mass litigation operation against Kobach with the help of the ACLU and others. Support our work by becoming a Kobach Litigation Supporter.

The litigation nationally has begun with a demand on 29 state voting chiefs for the names of all accused double-registered or double-voting citizens who have been purged. One state, Oklahoma, has complied, with names of obvious mismatched voters.
Leading the legal attack nationally is famed class action attorney Jeanne Mirer of Mirer, Mazzocchi, Julien & Chickedantz of New York.
Copies of the legal filings upon request.
Palast is available for interviews.

The Palast investigations team has been on Kobach and his fraudulent vote hunting scam since 2013 long before he became Donald Trump’s official vote fraud hunter.
Greg Palast has written four New York Times bestsellers, including Armed Madhouse, Billionaires & Ballot Bandits, and The Best Democracy Money Can Buy, now a major non-fiction movie, available on Amazon and can be streamed for FREE by Prime members!
Stay informed, get the signed DVD of the updated, post-election edition of The Best Democracy Money Can Buy: The Case of The Stolen Election, a signed copy of the companion book or better still, get the Book & DVD combo.
Support The Palast Investigative Fund  and keep our work alive!  Become a monthly contributor and automatically receive Palast’s new films and books when they’re released!
Or support us by shopping with Amazon Smile. AmazonSmile will donate 0.5% of your purchases to the Sustainable Markets Foundation for the benefit of The Palast Investigative Fund and you get a tax-deduction! More info .
Subscribe to Palast’s Newsletter or his separate list for Poems & Stories.
Follow Palast on Facebook, Instagram, and Twitter.
GregPalast.com