Osama bin Laden Read My Book – That's what the government told us
But what is it NOT telling us? 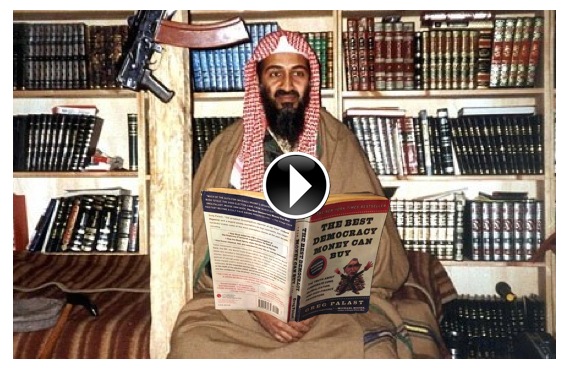 I already knew that Osama bin Laden read my book before the headlines this week – but I’m still angry that he gave The Best Democracy Money Can Buy only four-and-a-half stars on his Amazon review. Obviously, something in the book pissed him off, because he never friended me on Facebook.
It was actually quite embarrassing to learn that Bin Laden was reading my tome – and a few by my homie Noam Chomsky. It’s embarrassing because it’s clear that Bin Laden was more well-read than our president of the time (though, in George W Bush’s defence, there’s much to be learned from My Pet Goat).
I do hope Osama made it to page 229. I talk about a guy who worked at my office, Clinton Davis. Before I left to write for the Guardian and Observer, my office was in Tower 2 of the World Trade Center. Davis, a cop, was safe at ground level, but he ran upstairs to save others – and disappeared, forever. Did Bin Laden get a little laugh out of that one? At least he got to know his victim’s name.

Get a signed copy of the book.
Osama wouldn’t be caught dead without it!

And what did Bin Laden think of my investigation of the 9/11 attack? While working at Newsnight, a few weeks after the towers fell, a little birdie dropped off a 30-page memo marked “SECRET,” “eyes only” and “1-99I WF”, which is code for “national security document”. The document suggested that FBI agents were blocked from investigating the Bin Laden family well before 11 September 2001. Calls to the Defense Intelligence Agency, CIA and FBI insiders authenticated this bombshell of a devastating intelligence failure.
No, the evidence did not show that President Bush knew about the 9/11 attack in advance. But here was something still quite damning: we learned that the Bush family connection to the Bin Laden family business might have been a shield against government probes. Did Bin Laden, reading that, make a note to himself to thank the Bushes for their unintended protection? I assumed the FBI would deny the authenticity of the document. Instead of denying that the Bin Laden investigation had been spiked, the FBI spokesman told Newsnight these chilling words: “There are a lot of things the intelligence community knows and other people ought not to know.”
Ought not to know? What else ought we not to know? What else is government hiding from us – and when will it kill us?
The US government has charged Edward Snowden with “willful communication of classified communications and intelligence information to an unauthorised person”. CIA agent Jeffrey A Sterling has just received a three-year sentence for passing information to a reporter. This suggests that, today, Newsnight’s releasing the FBI document would land me or my informants in the slammer.
Why? Is there really a fear that terrorists will read our information? Well, in my case at least, I know Bin Laden probably did in fact read secret national security documents – in my book. Did he learn some great state secret that would allow him to escape? Obviously not. Did Bin Laden learn the secret that our leaders are incompetent and craven and that our intelligence agencies are poisoned by commercial and political interests? I suspect he knew that already.
Finding that Bin Laden read my book, with its several chapters revealing state secrets, confirms for me that the new official war on whistleblowers and reporters is not about keeping information out of the hands of terrorists, but making sure that “the public ought not to know” where the fools at the helm are leading us.
* * * * * *
Greg Palast is the author of several New York Times bestsellers including The Best Democracy Money Can Buy and Billionaires & Ballot Bandits, Armed Madhouse and the highly acclaimed Vultures’ Picnic.
Make a tax-deductible donation and keep our work alive..
Subscribe to Palast’s Newsletter and podcasts.
Follow Palast on Facebook and Twitter.
www.GregPalast.com