This article is the subject of a legal complaint from Peter Grossman. 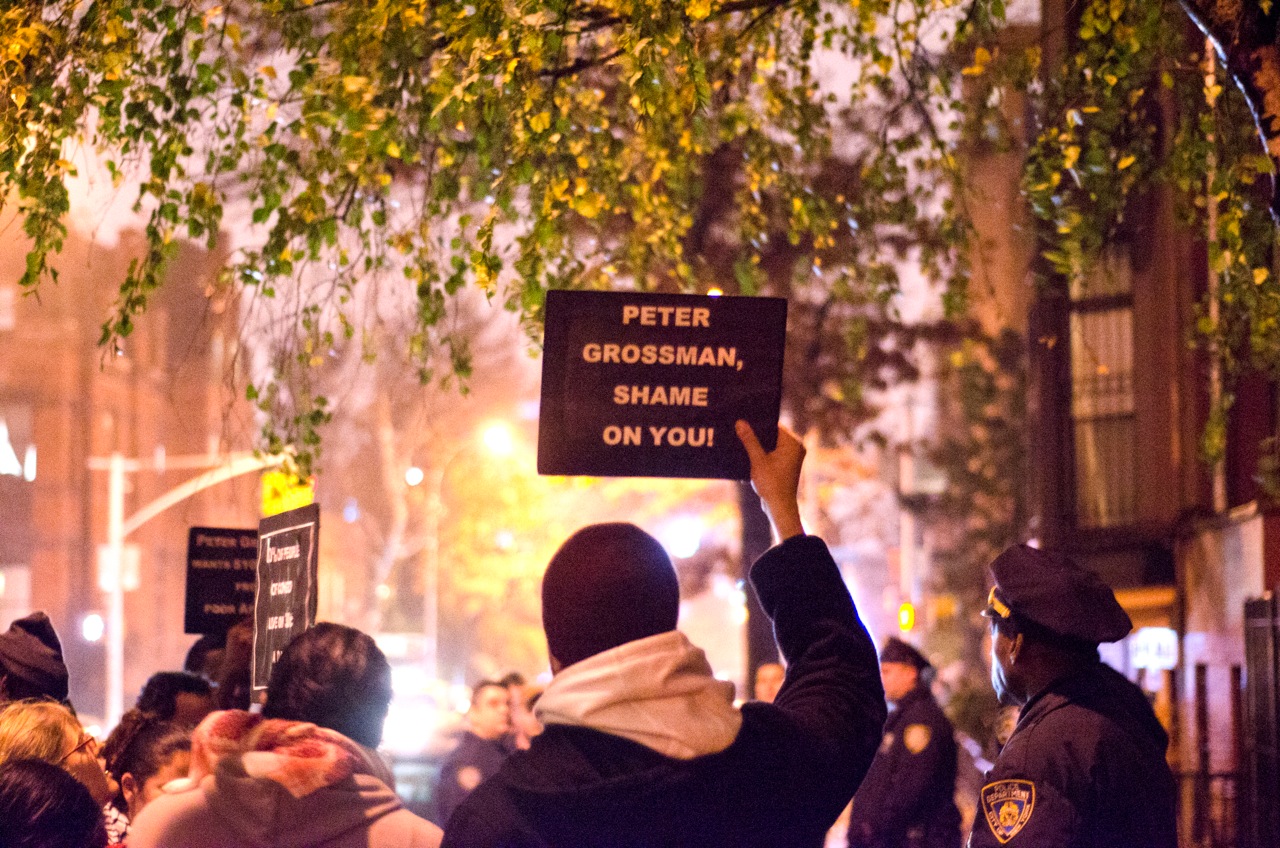 This past Sunday, a deputation from Occupy Wall Street crossed the bridge from Manhattan and brought its protest to the Brooklyn residence of one of New York’s “vultures” This type of vulture doesn’t roost in a tree, but in a swish brownstone.
A “vulture” is a financial speculator who, as we recently reported, gets his hands on debts owed by desperately poor nations. The Brooklyn “vulture” targeted by OWS and Friends of the Congo is Peter Grossman. Two weeks ago, the Guardian exposed him as a financier who is demanding the Democratic Republic of the Congo, the world’s poorest nation, pay $100m to the hedge fund he manages, FG Hemisphere.
Grossman, tipped off about the demonstration,
was apparently absent from his brownstone. Police attended, but were content to spectate, hands off.
The OWS marchers had come at the call of Friends of the Congo. Ayman El-Sayed, a registered nurse who has worked in the medical tent at Occupy Wall Street, explained why:

Spokesman for Friends of the Congo Kambale Musavuli was heartened by the alliance with OWS. A previous demonstration against vulture financiers attacking Congo had drawn Africans only. The new alliance is a big step for both groups.
These past couple of weeks, I have been running around the US reporting from half a dozen occupations, all now swept away by police action. But what I had witnessed was the Occupiers had already begun building what the “old left” used to call “links on the chain”.
The move from fighting for park space to fighting for issues is taking practical shape in, for example, Wisconsin. In Madison, the Occupy movement’s alliance with the public service unions has become the engine of what is likely to be a successful drive to recall anti-labor Republican Governor Scott Walker. In Chicago, at the Teamsters Hall last week, the president of the United Electrical Workers in the midwest, Carl Rosen, told me he was offering to shelter the Occupiers for a night a week during the brutal Chicago winter.
I don’t think the 1% can be pleased. Labor giving the Occupy movement shelter also gives them legitimacy – and vice versa, as young folk get an education in the practical struggles of working people who can’t leave the loading dock to live in a tent.
And it’s spreading. I’m writing this in Washington, DC, where Occupy activists have agreed to join forces with TransAfrica and others to go after Grossman’s associate, a financier who goes by the moniker “Goldfinger”. Goldfinger’s office is close by the White House, and he may soon find that he isn’t the only person “occupying” his office or mansion.
As for OWS itself, which has dispersed to changing locations, activists are linking up with environmental groups fighting “fracking”, an environmentally dangerous method of drilling for gas, and preparing for the next occupation of “vulture” Grossman’s neighborhood.
This redirection of activist energy – into new alliances and an expanded focus – could turn the Occupy movement into a wider, yet more powerful phenomenon. The 1% must be dismayed to learn that eviction does not end conviction.
This article was amended on 20 December 2011 to remove details of a home address.
Read also: Weekly “Vulture Funds” Protest Perches at Fort Greene Home and Global Politics Occupy a Quiet Block and Throw Local Family Into Turmoil
*****
Greg Palast is the author of Vultures’ Picnic: In Pursuit of Petroleum Pigs, Power Pirates and High-Finance Carnivores, released in the US and Canada by Penguin.