Obama Doesn’t Sweat. He should. 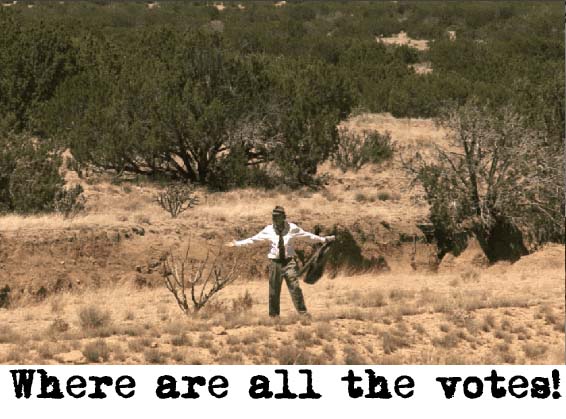 In swing-state Colorado, the Republican Secretary of State conducted the biggest purge of voters in history, dumping a fifth of all registrations. Guess their color.
In swing-state Florida, the state is refusing to accept about 85,000 new registrations from voter drives – overwhelming Black voters.
In swing state New Mexico, HALF of the Democrats of Mora, a dirt poor and overwhelmingly Hispanic county, found their registrations disappeared this year, courtesy of a Republican voting contractor.
In swing states Ohio and Nevada, new federal law is knocking out tens of thousands of voters who lost their homes to foreclosure.

My investigations partner spoke directly to Barack Obama about it. (When your partner is Robert F. Kennedy Jr., candidates take your phone call.) The cool, cool Senator Obama told Kennedy he was “concerned” about the integrity of the vote in the Southwest in particular.

He’s concerned. I’m sweating.
It’s time SOMEBODY raised the alarm about these missing voters; not to save Obama’s candidacy – journalists should stay the heck away from partisan endorsements – but raise the alarm to save our sick democracy.
And that somebody is YOU. Joining with US, the Palast investigative team. Here’s how:
We have been offered an astonishing opportunity to place the Kennedy-Palast investigative findings on a national, prime-time, major-network television broadcast. Plus, separately, we have an extraordinary offer to create a series of reports for national network radio.
But guess what? The networks will NOT PAY for our public service reports. We have to raise the start-up funds in the next two weeks to film it, record it and get it on the airwaves.
WE need YOU to fund the reports, DISSEMINATE the findings as we post the print, audio and video on the web – and ACT on it.
So, for only the second time this year, I am asking each one of you to go to The Palast Investigative Fund and make a tax-deductible donation.
Progressives have complained for years of no opportunity to get the hard, cold sweaty truth on the air. Well, put your money where your heart and soul is.
Donations from our prior and only request already paid for some of our filming in the Southwest. Don’t let this story be swept under the border.
If you want more information, go to GregPalast.com, or write me directly at GregPalast.com – and hit the button, “contact Greg.”
Pass this on!
**************************
Greg Palast is a Puffin Foundation Writing Fellow for Investigative Reporting at the Nation Institute, New York. Read and view his investigations for BBC Television at www.GregPalast.com. Support the investigation at www.PalastInvestigativeFund.org