After the success of the Integrity First for America-led civil suit, brought against the organizers of the 2017 Unite the Right rally in Charlottesville, the Attorney General of the District of Columbia has filed a similar case.

D.C. Attorney General Karl A. Racine’s complaint brings action against the far-right militia group, the Oath Keepers, the Southern Poverty Law Center-designated hate group, the Proud Boys, and dozens of individuals for “conspiring to terrorize the District by planning, promoting, and participating in the violent January 6, 2021, attack on the United States Capitol Building”.

Filed December 14, 2021, the complaint charges the two organizations, the Oath Keepers and Proud Boys International, L.L.C., plus thirty-one named defendants — including Proud Boys’ chairman Enrique Tarrio and Florida Oath Keepers’ leader Kelly Meggs — as well as 50 unnamed defendants. Many of the named defendants have already been arrested by law enforcement for their criminal participation in the January 6 riots.

Two Oath Keepers listen to speakers at a 2020 ‘Back the Blue’ rally in Albany, NY that was held to counter the many Black Lives Matter protests across the country. Photo: © Zach D. Roberts, 2020

The lawsuit is the first by a government agency to hold these groups and individuals financially liable for what happened in the nation’s capital on January 6. Attorney General Racine is using the modern version of an 1871 law, known as the Ku Klux Klan Act, claiming that the defendants conspired to commit violence in Washington, D.C..

The 84-page complaint lays out how the assault on the Capitol was planned, and details Donald Trump’s role in activating the Proud Boys and inspiring attacks on anti-fascist activists, known as “Antifa”, stating:

On September 29, 2020, during the first presidential debate of his reelection campaign, President Trump specifically addressed the Proud Boys, stating: “Proud Boys, stand back and stand by, but I’ll tell you what, somebody’s got to do something about Antifa and the left, because this is not a right-wing problem. This is a left-wing problem.”

Aware that they would likely be targets of assault, in the event, few “Antifa” counter-protestors actually showed up on January 6. This laid bare the true purpose of the insurrection.

The complaint states that the plaintiffs were “motivated by a desire to overturn the legal results of the election and initiate a second term of Donald Trump’s presidency” and that “the January 6th Attack on the Capitol, was not a protest or a rally. It was a coordinated act of domestic terrorism.”

The complaint details how the Other Keepers and Proud Boys “conspired to commit acts of violence and attack the United States Congress…with the express purpose of preventing members of Congress and then Vice President Michael Pence from discharging their official constitutional duties and declaring Joseph Biden the winner of the 2020 Presidential Election.” 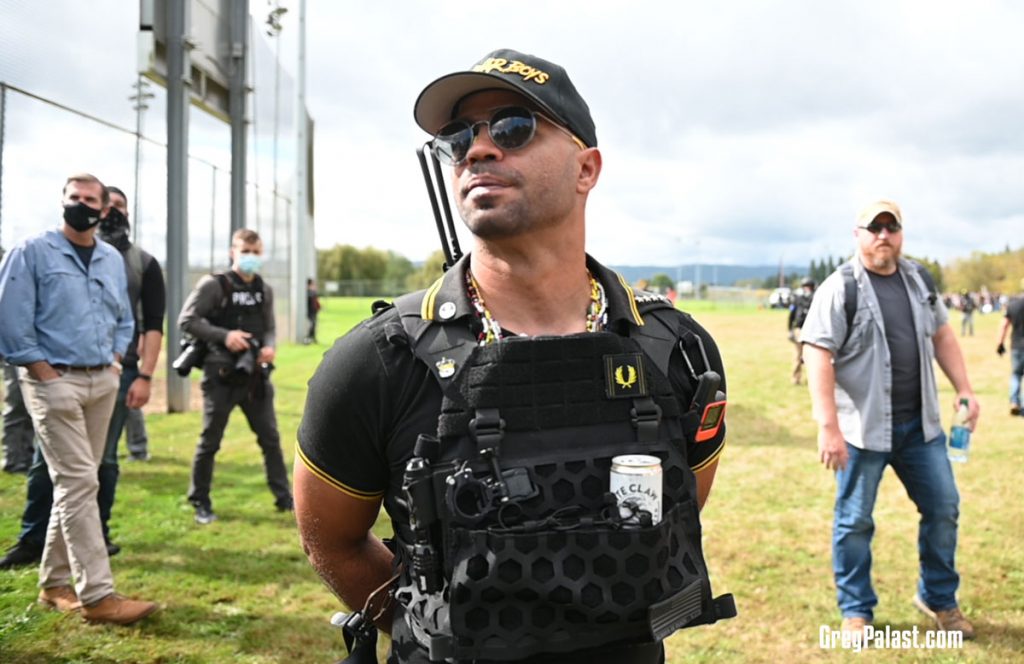 Chairman of the Proud Boys, Enrique Tarrio, who is named in the suit, did not participate in the January 6 attack on the Capitol, since he was detained and ordered to stay out of Washington by a judge following an arrest for vandalizing church property, which involved the burning of a Black Lives Matter banner. Tarrio had been expecting to be in Washington on January 6, however, and participated in the organization in the run up to the event.

Much like the Unite the Right lawsuit that ended this month with a $25 million win for the victims of that rally, the plaintiff’s true goal is to financially ruin the two organizations. The complaint seeks compensatory, statutory and punitive damages, not only relating to the physical damage to property, but to the “assault” and “battery” of federal, state, and municipal police officers, and the “infliction of emotional distress” on them. Furthermore, the District of Columbia also hopes to recover “costs related to the emergency and other medical care provided to MPD officers who were injured as a result of the Defendants’ actions.”

Unlike the criminal complaints that are currently being prosecuted, the D.C. Attorney General does not have to prove his case “beyond a reasonable doubt.” He merely has to prove that there’s a “preponderance of the evidence” for the civil case to be successful.

If successful, a significant sum will likely be awarded in punitive damages connected to the 42 U.S.C. § 1985 charge of Conspiracy to Interfere with Civil Rights. The goal of the defendants was to disrupt Congress and stop the final certification of the 2020 election, thus denying hundreds of millions of Americans their rights as citizens.

It has long been wondered where the Proud Boys and Oath Keepers get their funding from, so the process of discovery in this case will likely be of particular interest. While a good amount is donated at events held by the groups, the costs of organization, including cross country travel, and the legal fees that these individuals and groups have incurred in recent years are likely to be considerable.

And this isn’t the only lawsuit that the Proud Boys and Oath Keepers are facing in the coming months. On August 26, 2021 a group of seven Capitol Police officers filed a civil lawsuit against the organizers of the January 6th insurrection, which also names the Proud Boys, Oath Keepers and several of the same individuals named in the District of Columbia suit. Donald J. Tump, Donald J. Trump for President, Inc., Stop The Steal LLC, Roger Stone, and Ali Alexander are also named in the Capital Police complaint, which also cites the Ku Klux Klan Act.