Buckle up, America.  The voting demolition derby that was the New York primary on Tuesday was merely the crash test for the coming voting wreckage in November:  a carefully planned pile up. 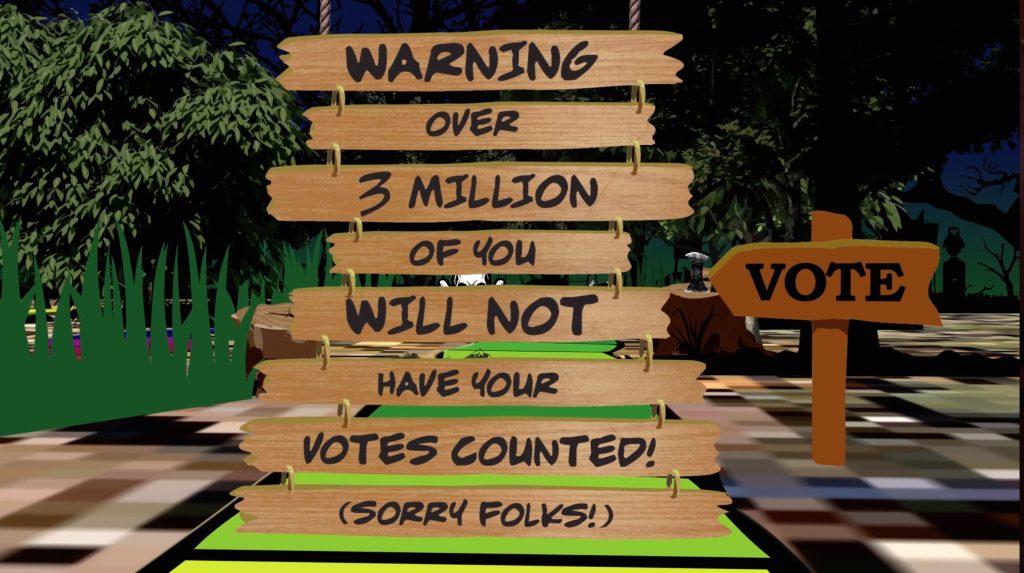 Image from Palast’s upcoming film The Best Democracy Money Can Buy
Watch the trailer
First, live from New York.
Francesca Rheannon, whom you may know as the host of Writers’ Voice radio, did the civic thing by volunteering to work the polls in a town east of New York City.
“I just got off my 17 hour shift as an election official.  In my election district, out of 166 Democratic voters, 39 were forced to file affidavit ballots.  The last [election] I worked in, exactly ONE voter needed an affidavit ballot.”
That’s nearly one of four voters. Why?  Their names had gone missing from the voter rolls.
An affidavit ballot (called a “provisional” ballot in most other states) is a kind of placebo ballot.  You get to pretend to vote – but the chance it will actually be counted is well, good luck.  If your name is wrongly removed, kiss your vote – affidavit or not-goodbye.
Rheannon’s experience was hardly unique.  In Brooklyn alone, over 125,000 names were quietly scrubbed from the voter rolls in the five months leading up to the primary.
To put it in perspective, the number of voters purged equals about half of the number who got to vote.  Scott Stringer, the New York City Comptroller will now audit the Elections Board–now that the election is over.  Hey thanks, Scott.
Neal Rosenstein, the lead voting rights attorney for the New York Public Interest Research Group, which plans legal action, notes that part of the problem is that partisan hacks sit on the Elections board in New York-hacks from both parties.
Brooklyn is under the control of the Kings County Democratic Party, one of the last of the big city machines.  Would they attack their opponents’ voter registrations?  I don’t have to guess:  in my wasted younger days, I was in the Brooklyn County elections office with the hacks where we were assigned by the Party to challenge voters’ signatures en masse.  (I wouldn’t and nearly lost my state job.)
Am I saying the machine “fixed” the election for Hillary Clinton?  Without further investigation, it would be irresponsible for me to pronounce judgment.  Some of the purged may have moved, some have died.  But those who waited in line only to fill out affidavit ballots are unlikely to be deceased.
If the Machine had been aware of the mass purge underway, would they have stopped it?  As they say in Brooklyn, Fahgeddabouddit.
But whether party hacks shoplifted New York or not, that’s small potatoes. Scrubbing voter rolls is not a “New York value.” It’s a nationwide epidemic, a disease eating away at the heart of our democracy.
Voting officials learned a lesson from Katherine Harris the Florida Secretary of State who purged Black voters in 2000.  They learned how to repeat the purge, expand it and carefully hide it.
I’ve been traveling the nation, from Ohio to Georgia to Arizona and back-and finding the voter-roll purging machinery running at full speed.
Nationwide, state voting chiefs are, from my long experience, the most violently partisan officials you’ll ever encounter.
From the data provided by the US Elections Assistance Commission, we can calculate that no less than 491,952 voters were wrongly removed from the rolls in 2008, the last reviewed Presidential election. In addition, 2,383,587 voters filled out registration forms that were simply never added to voter rolls – and 767,023 provisional and affidavit ballots were not counted.
And it’s not just anyone’s ballot. I’ll never forget that, at one of my recent talks on vote suppression, I asked how many in the audience had ever been shunted to a provisional ballot.  There were only two Black people in the audience.  They were the only two to raise their hand.
US Civil Rights Commission statistics tell the story:

The chance of a ballot “spoiled” – not counted for one reason or another – is 900% higher if you’re Black than if you’re White.

As Rosenstein says for NYPIRG, “Instead of purging voters, we should be enfranchising them.”  Yes. Though we thought that was settled by the Civil War.
OK, we didn’t know about the New York purge beforehand.  But I’m telling you this now:  My team is uncovering an unjustified ethnic cleansing of voter rolls from Ohio to Florida to Texas.
This year I was in Selma, Alabama, with Hank Sanders, an African-American who joined Martin Luther King on the march to Montgomery that won the Voting Rights Act.  Today, he’s State Senator Hank Sanders, a title that is a tribute to America’s advance on voting rights.  He’s also Hank Sanders, purged voter, forced to vote “provisionally” this year.
Why?  I’m investigating.  But the state officials (and let’s tell it like it is:  mostly GOP officials) have used so many spurious grounds to cancel registrations-“caging,” “cross-checking” and a host of other sick tricks”“it’s not easy to pin-point which one is responsible for the “lynching by laptop.”
It’s worth noting that Brooklyn, like Alabama, was on the “pre-clearance” list in the Voting Rights Act.  I can tell you right now, neither Hank Sanders nor the 125,000 Brooklynites would have been purged had the Supreme Court not gutted the Act in 2013.
As I look upon the wreckage that was the New York primary, I see the prelude, the test run, for the catastrophic failure, the well-planned failure, of the voting system in November. The purges and votes “spoiled”–the votes not counted-not the voters, may well elect our President.

*  *  *  *  *  *   *
But there’s something you can do about it.
Right now, my investigations and production team are finishing the final frames of our film on the upcoming theft of the 2016 election:  The Best Democracy Money Can Buy:  A Tale of Billionaires and Ballot Bandits.
Donate $100 to support our investigation and I will list you in the movie credits, send you a signed copy of Billionaires & Ballot Bandits right now and a signed copy of the DVD once the film has wrapped.
Or support our work by making a No Gift Donation, small or ginormous, all are immensely appreciated!
Most important, your tax-deductible donation will help us finish, broadcast and distribute our film and print reports before the November catastrophe. And just maybe, together we can build a better democracy.