For Truthout
On May 6, 2008, twelve fraudulent voters, dressed as nuns, attempted to cast ballots in the Presidential Primary in Indiana. 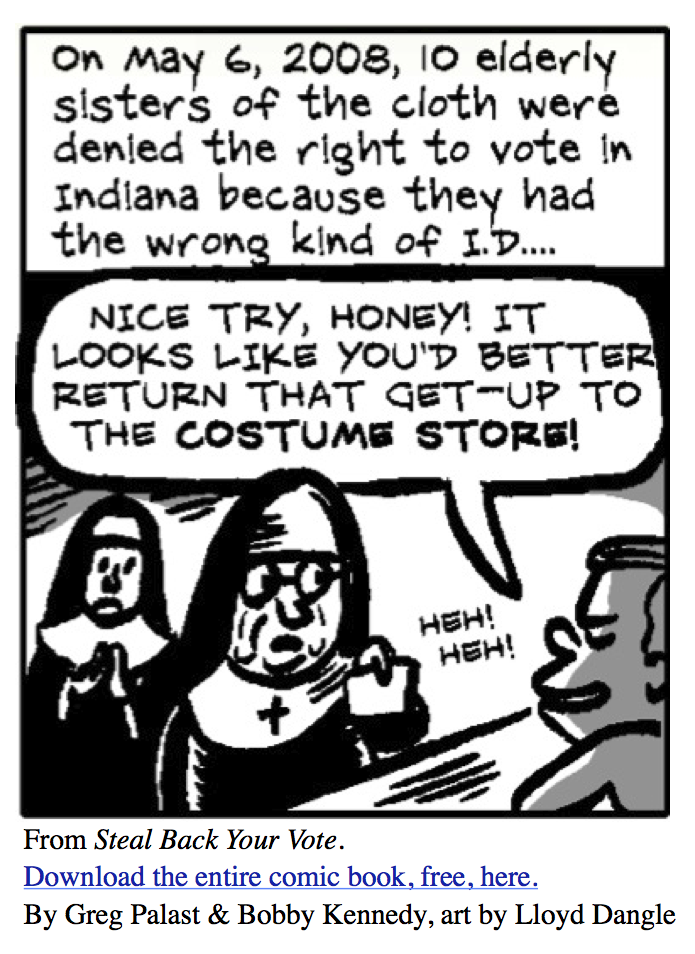 Luckily, ten of them were caught, stopped cold by Indiana’s new voter photo ID law.  The law had been found to be constitutional by Federal Judge Richard Posner of the 7th Circuit Court of Appeals.
It turns out the nuns that Posner’s ruling turned away were, in fact nuns.  All the sisters had photo drivers licenses, but they had expired (the licenses, not the nuns).  The Sisters of the Holy Cross, had, mercifully, given up driving (they were pushing 90 years of age.)
It was a cute story that ran nationwide.  What wasn’t so cute, and ran nowhere in the US press, was that 72,000 Black voterswere blocked at the polls by this Posner-blessed photo ID law.
It was Posner’s decision that first allowed states to return to the Jim Crow vote suppression tactics that we thought had vanished with the passage of the Voting Rights Act.
In his newly released autobiography, the aging Posner, hearing the wings of mortality and the gavel of Judgment Day coming down, admits that he was stone cold wrong.  Posner now concedes that that the voter ID rule was a Republican partisan ploy in intent and viciously racist in practice.

Posner, seeking forgiveness, says it wasn’t his fault.  He wasn’t “really given strong indications that requiring additional voter identification would actually disfranchise people [who are] entitled to vote.”
Sorry, Your Honor, you’re still going straight to Hell.  For fibbing.
In fact, Judge Posner was presented with a statistical analysis by Professor Matt Barreto of the University of Washington, Seattle, detailing, by race, the hundreds of thousands of poor voters who do not have, believe it or not, passports or other newly required ID. 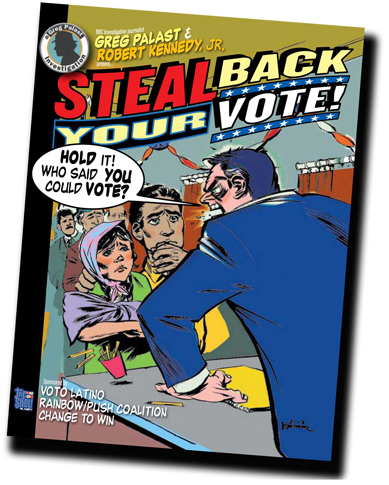 And in case the Judge couldn’t understand the statistics of Barreto’s analysis, he could have read the comic book version, right here. [And so can you: Download the entire comic/legal treatise for free:  Steal Back Your Vote, by Greg Palast and Robert F. Kennedy Jr., with comics by Ted Rall, Lloyd Dangle and bubble text by Zach Roberts.]
Judge Posner’s excuse at the time he ruled:  a voter ID law would prevent fraudulent voting, someone voting under someone else’s name.  But, Your Honor, you were told that, in a review of records going back 100 years, Indiana had not discovered one single case of voter identity theft.
Now Posner wants us to believe that he’s shocked – shocked! – at the racial and partisan result of his ruling. He says, “Indiana’s requirement that prospective voters prove their identity with a photo ID [is] now widely regarded as a means of voter suppression rather than fraud prevention.”

Judge Posner and the Bank Busters
Who cares about this Posner guy?  You should.
Dr. Posner, who teaches at the University of Chicago Law School, is correctly described as the most influential judge of our generation.  Lord help us.
I’m not saying he’s acted as Satan’s consigliere, but that’s only because I don’t believe in the Devil.  Evil is human, often humans with professorships.
While famed for giving Constitutional color to Indiana’s Ku Klux voter ID law, Posner’s real influence was in his judicial review of the regulations on business.
In yet another recent book, the prolific Posner blames the 2008 collapse of the world financial system on the elimination of the Glass-Steagall Act, on banking deregulation and on “hostility to taxation and to government in general.”
While not a stunning observation, I was still stunned: The attacks on Glass-Steagall and calls for the deregulation of banking had their intellectual origin in The Journal of Law & Economics.  This ultra-right-wing slough of corporation-kissing pornography was founded by Chicago economists Gary Becker, George Stigler and Richard Posner.
Posner and the so-called “law and economics movement” was violently hostile to virtually all regulation, from food and drug safety to the minimum wage. Pollution laws?  Eliminate them all!  Looney, yes, but Posner’s acolytes and movement fellow-travelers soon ruled the federal bench, appointed, like Posner himself, by Ronald Reagan.
The highfalutin sophistry of Posner, Stigler and their fellow Chicago professor Milton Friedman, sprinkled intellectual fairy dust on the markets-Ã¼ber-alles crowd in Washington.  This high-toned bullshit transformed lobbyists’ wish-lists and corporate greed grabs into quests for “freedom” and “market solutions.”
In his weak mea culpa over the bust of his bank deregulation dreams, Posner claims that the crash engendered by deregulation was “not anticipated.”
You’ve got to be joking, Your Honor.  At the time the Glass-Steagall Act was shattered, Economist Joseph Stiglitz (not to be confused with Stigler) was crying frantically about the disaster to come.  Even one of their Chicago students stood up and asked if they were insane or just crazy.  (I was warned by another famed professor to shut the f- up or I’d find myself tossed out on my keister.)

Police Batons and Free Markets
Look, I don’t care if Professor Posner can save his soul by recanting a lifetime of professorial gibberish and horrific rulings.
What’s important to understand is the nexus:  attacking voting rights, attacking worker and consumer rights, are of one piece:  the right-wing free-marketeers deep-rooted distrust of democracy.
Throughout their writings (until now), the Friedman-Posner-Stigler crowd all disparaged the rights of citizens to determine the social contract, the rules of economic play.  To them, voters are fools, not to be trusted with telling corporations or cops how to run our world.
This fascist bend (and I use the term advisedly) came shining through in one of Posner’s infamous outbursts from the bench.  Background:  The Chicago police were known for beating the crap out of peace demonstrators and, demonstrating or not, minority kids.  The ACLU sued when cops arrested citizens and reporters who attempted to film the police and their batons.  Posner tried to stop the ACLU lawyers from even arguing their case, saying, “I’m always suspicious when the civil liberties people start telling the police how to do their business.”
Well, Judge Posner, I’m always suspicious of a robed Torquemada who believes that corporate “persons” have civil liberties but person-persons have none. 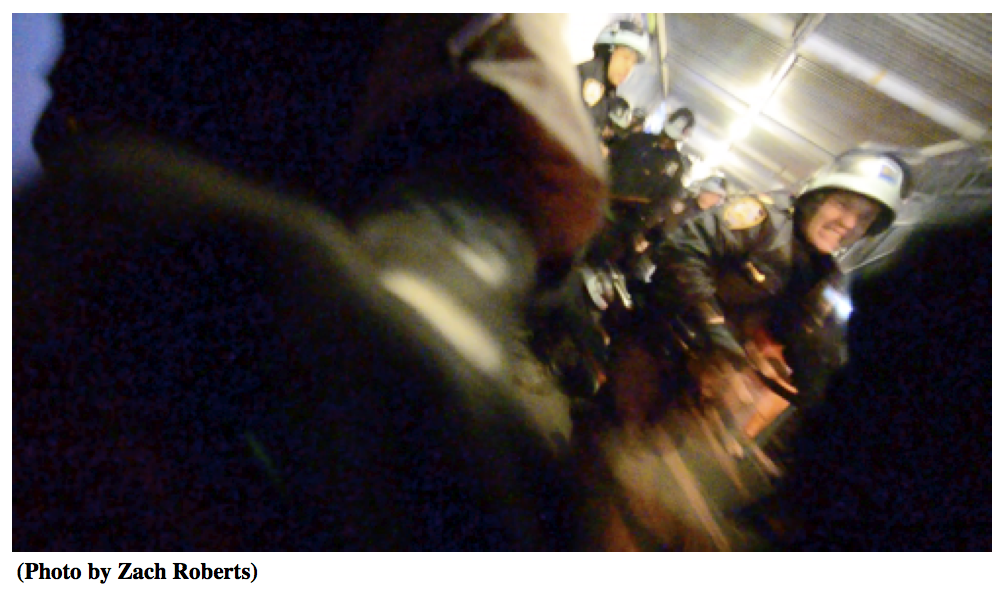 I’m sure Judge Posner would have been thrilled to see the police “do their business” on Zach Roberts, our Palast team photographer.  Here’s a photo Zach took at Occupy Wall Street just as a police baton was coming down on his head – and on our camera.
Unfortunately, former Chicago law professor Barack Obama clearly took a little too much Posner with him to the White House, as we see in the charges against Bradley Manning and Edward Snowden and in the witch-hunt for “leakers” that makes Richard Nixon look like Thomas Jefferson.

Judgment Day
I have this vision.  Posner gets to the Pearly Gates, and despite the testimony against him by ten pissed-off nuns, he’s admitted to Heaven.  But before Posner can enter the Kingdom of Paradise, Saint Peter stops him and says, “Not so fast, professor.  Did you remember to bring your photo ID?”
* * * * * *
Greg Palast is the co-author with Bobby Kennedy of the comic book Steal Back Your Vote and the treatise on deregulation, Democracy & Regulation, with Jerrold Oppenheim and Theo MacGregor, winner of the ACLU’s Upton Sinclair Freedom of Expression Award.
Greg Palast is also the author of the New York Times bestsellers, Billionaires & Ballot Bandits, The Best Democracy Money Can Buy, Armed Madhouse and the highly acclaimed Vultures’ Picnic, named Book of the Year 2012 on BBC Newsnight Review.
HELP US FOLLOW THE MONEY. Visit the Palast Investigative Fund’s store or simply make a tax-deductible contribution to keep our work alive!
Subscribe to Palast’s Newsletter and podcasts.
Follow Palast on Facebook and Twitter.
www.GregPalast.com