My Apologies to the Family of Mrs. Thatcher

I strenuously object to the dissemination of this scurrilous doggerel, falsely attributed to me, on the passage of an iconic stateswoman: 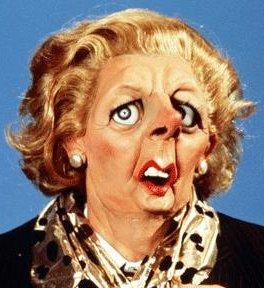 Naggie Hatchet dead and gone
Ruled her Empire State like Queen Kong
Stomping on us little peeps
Just to sell our Jewels to creeps.
And lost the war that Winston won
By turning back the clocks to
England’s meanest hour.
Yet worse to come: as trapped below her terror tower,
And forced to look up that Iron Skirt
At the beastly anus as it squirt
From the crack in the grizzly monkey hair:
Tony Blair.

My apologies to Lady Thatcher’s family and sincere condolences.  After all, large simians are people, too.

As to the real provenance of the poem on the death of Naggie Hatchet, I have found similar couplets written in my own hand and that of my co-author, Mr. Jack Daniels.
As Lady Thatcher’s comrade Ronald Reagan said when shown the cold evidence that, indeed, Reagan authorized the treasonous act of sending weapons to the Ayatollahs of Iran:
“My heart says I didn’t, but the facts say otherwise.”
The smoking couplet, undeniably covered with my fingerprints…

Satan roared, his roasting spit a-burning.
He cranked the crank on the trussed-up meat, and laughed,
“Who said, ‘This Lady’s not for turning’?”

Again, my deepest apologies for these most inappropriate rhymes.

“Ritz Cracker” – @MadamMiaow aka Anna Chen responded to my inexcusably rude rhymes on the death of Lady Thatcher with this box of zits….

Margaret Thatcher died at the Ritz.
It fits.

Her blitz on the poor,
national assets thrust in the mitts
of corporate bandits.
Wealth trickled-down like a horse shits
undigested grain for birds that flit
round what its rear end emits.
Compassion deficit, dried out tits,
the country in bits, run by greedy gits.
Her fans omit the human price
of crimes her class commit.
Her legacy is the pits.
And she closed them as well.

By the way, Palast poetry partisans, I want you to check out Anna Chen’s brilliant, dangerous and fully-loaded assault poems, Reaching for my Gnu, out on Amazon.
*  *  *  *  *  *  *
Greg Palast is the author of the New York Times bestsellers Billionaires & Ballot Bandits: How to Steal an Election in 9 Easy Steps, The Best Democracy Money Can Buy, Armed Madhouse and the highly acclaimed Vultures’ Picnic, named Book of the Year 2012 on BBC Newsnight Review.
Visit the Palast Investigative Fund’s store or simply make a contribution to keep our work alive!
Subscribe to Palast’s Newsletter and podcasts.
Follow Palast on Facebook and Twitter.
www.GregPalast.com