Mrs. Clinton’s forgotten fling with the Killer of Karachi 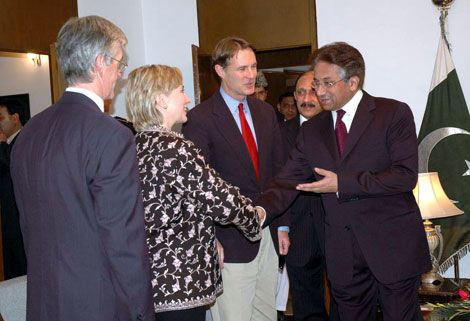 He was the other man in Hillary’s life. But it’s over now. Or is it?
You’ve seen all those creepy photos of George Bush rubbing up against Pakistan’s President Pervez Musharraf, the two of them grinning and giggling like they’re going to the senior prom. So it’s hard to remember that it was Hillary and Bill who brought Pervez to the dance in the first place.
How that happened, I’ll tell you in a moment.
But first, let’s get our facts straight about the man in the moustache. Musharraf, according to George Bush, The New York Times, NPR and the rest of press puppies is, “our ally in the War on Terror.” That’s like calling Carmine Gambino, “Our ally in the War on Crime.”
Musharraf’s the guy who helped the Taliban take power in Afghanistan in 1996. And, through his ISI, Pakistan’s own KGB, he is still giving the Taliban secret protection. And this is the same Musharraf who let Khalid Sheik Muhammed, Osama’s operations chief for the September

11 attack, hang out in Quetta, Pakistan, in the open, until Khalid embarrassed his host by giving a boastful interview to Al Jazeera television from his Pakistan hang-out.
And this is the same Musharraf who permitted his nation’s own Dr. Strangelove, A.Q. Khan, to sell nuclear do-it-yourself bomb kits to Libya and North Korea. When the story of the flea-market in fissionable materials was exposed, Musharraf (and Bush) both proclaimed their shock – shock! – over the bomb sales. Musharraf didn’t know? Sure. Those tons of lethal hardware must have been shipped by flying pig.
But, unlike Saddam and Osama, creations of Ronald Reagan’s and George Bush Sr.’s Frankenstein factories, Musharraf was a Clinton special.
And it all began with an unpaid electricity bill. In 1998, Pakistan wouldn’t pay up millions, and they owed billions, to British and American electricity companies. And for good reason: the contracts called for paying insanely high prices. It smelled of payola – and ultimately, the government of Pakistan filed charges against power combine executives and canceled the contracts. That’s the rule under international law: companies can’t collect on contracts they obtained by pay-offs.
But these weren’t just any companies. One was a Tony Blair favorite, Britain’s National Power. The other was Entergy International, a sudden big-time player in the international power market based out of, oddly, Little Rock, Arkansas. Despite the Clinton Administration’s claim to fight foreign corruption, this was an exception. Clinton and Blair voted to cut off Pakistan’s funding from the IMF. Pay-up the power pirates, they told Pakistan, or starve.
Why was President Clinton so determined to crush Pakistan because of an unpaid bill to some Little Rock company. This was not just any company. But that wasn’t much. More important, Entergy and its partners, the Riady Family of Indonesia had just paid about half a million dollars to Hillary’s old Rose Law Firm partner Webster Hubbell. Odd that, hiring Hubbell. Why would Entergy pay big bucks to Hubbell as a “consultant” when he was on his way to jail for a felony. Hubbell was doing time because he refused to testify against Ms. Rodham.
Did President Clinton know about the payment to Hubbell? Clinton denied it to the press, but under oath, to the FBI, Bill said he, “wouldn’t be surprised” if the Riadys told him about the payoff to Hubbell in one of Bill’s several private meetings with them in the Oval Office.
Was there a connection between Entergy’s kindness to Hillary and her law partner and the power company’s extraordinary sway with the Administration? From inside information on energy policies to favor requested of Tony Blair’s office by Hillary’s office, Entergy could do no wrong. Certainly, their consortium’s executives wouldn’t have to stand trial in Pakistan.
And Entergy got its money. On December 22, 1998, Pakistan’s military, at the direction of General Pervez Musharraf, sent thirty thousand troops into the nation’s power stations. At the time, Entergy’s partners told me, “A lot changed since the army moved in. Now we have a situation where we can be paid. They’ve found a way to collect from the man in the street.” Yes: at gunpoint, according to Abdul Latif Nizamani, a labor union leader who spoke with me after Musharraf’s gang had arrested him.
With Pakistan’s army in control of the nation’s infrastructure, and acting as guarantor of payment to the US and UK power giants, General Musharraf’s final takeover of the entire government nine months later – a “surprise” coup to the Western press – was, a forgone conclusion. And the Clintons, complicit, like Bush today, could say little.
Just months before he left office President Clinton paid a sudden visit to Musharraf. Congressional Democrats were stunned. Musharraf had quickly shown himself to be a Taliban-loving, unbalanced dictator who violated US treaty terms by exploding a nuke and threatening to incinerate our ally India. Notably, the Ambassador with Clinton made payments to the electric companies a top item on his agenda.
Favors done; favors repaid. Nothing new under the sun, but it’s a dangerous game, Senator Clinton.
All right, maybe you can say that President Clinton’s blessing of the radioactive dictator can’t be blamed on Hillary despite the smelly money chain going from Arkansas to Karachi. But, be honest, the lady sure as heck ain’t running on her record as a Senator; her whole pitch is, “Re-elect Clinton.”
And I’d rather tell you this story before you hear it from President Giuliani.
Nevertheless, let’s not lose sight of the current danger. While the Clinton’s may have handed us the Lunatic of Lahore, it’s George Bush who leaves mints on his pillow. I have no information that Clinton knew of the sales to North Korea. The Bush Administration did and, we discovered at BBC, blocked the CIA investigation that could have exposed it in 2001. And that, Mr. Bush, is a very, very dangerous game. The problem of creating Frankensteins, whether an Osama or a Saddam or a Musharraf, is that these creatures are often known to rise and turn on their creators.
But I’m sure we’ll correct the error. Four years ago, as Bush was proclaiming victory over the Butcher of Baghdad, I wrote, “Given our experiences with Saddam and Osama, our monsters tend to get out of control after about 11 years. Therefore, we can expect, in the year 2013, that President Jeb Bush will have to order the 82d Airborne into Pakistan to remove Musharraf, the Killer of Karachi.”
Unfortunately, we may not have that long.
*********
Based on Greg Palast’s investigations for the Guardian papers of Britain 1998-2001. Palast is the author of the New York Times bestseller, ARMED MADHOUSE: From Baghdad to New Orleans — Sordid Secrets and Strange Tales of a White House Gone Wild. He is currently on assignment in Ecuador for BBC Television. Sign up for Palast’s reports at www.GregPalast.com