Me and Piers Morgan: Hacked and Attacked
How Morgan's Fabricated Story Almost Ruined This Reporter

Exclusive for Truthout.org/Buzzflash
I am not surprised that Piers Morgan has been outed for hacking phones (listening, in one case, to personal messages between Heather Mills and Paul McCartney). I learned about the creepy antics of this one-man TV-host crime spree the hard way: as a victim of his crime-and-slime form of “journalism.”
On September 29, 1998, Piers Morgan’s Mirror ran a screaming full page headline:  SEX SCANDAL ROCKS LABOUR CONFERENCE.  His paper

had caught a rival paper’s reporter who’d broken into the hotel room of a comely young rising star of the Labour Party.  The reporter was caught there half undressed.
I was that reporter.
And the story was a complete load of crap.  But Piers Morgan, “editor” of the Mirror, ran the report on Page One, and pages 2, 3, 4, 5 and 6 – even though he knew it was fabricated.  He knew because he had fabricated it.
Prime Minister Tony Blair’s press chief personally thanked Morgan for running the bogus story.

This was not the first time Pirate Morgan had worked me over.  Months earlier, on Page One again, he ran a full page photo of me (one that made me look bald!) under the words THE LIAR in letters bigger than the Mirror’s headline, Hitler Defeated.
(Private Eye, the Onion of Britain, ran a response – a photo of me under the headline, IS THIS THE WORLD’S MOST EVIL MAN? by “Piers Moron.”)
OK, I’m bald.  But I am not a liar. I was in that hotel room to get a story, not get the young lady’s panties.  But I did not break in.  That’s what Morgan would do.  A sworn affidavit by the hotel clerk said the female in question had left me a key with instructions to meet her in her room.
In other words, I was set up like a bowling pin.

As an investigator it is quite embarrassing to have fallen so easily into a honey trap, but the honey was quite something:  I was lusting after information about her mentor, the man known in England as The Prince of Darkness, Peter Mandelson, or I should say, the Right Honourable Lord Mandelson.
I’d already busted open a story about how Mandelson, Blair’s claw, Blair’s Karl Rove, had aided a “cash-for-access” scheme by his lobbyist cronies.  He helped fiddle a bid for a contract to run Britain’s National Lottery to give the deal to the guys who ran the Texas Lottery.  (If you smell George Bush’s connection, you’d be right.)
The story I wrote for The Observer (The Guardian’s Sunday paper), “Lobbygate:  Cash For Access” won my co-writer Antony Barnett and I the British equivalent of the Pulitzer – and nearly won me time in a lock-up: The Daily Mirror encouraged Mandelson’s gal to file charges against me with the constabulary for breaking into her room – though they knew she left me the key.
This is not just fun and games.  Piers’s phony file on me was used by Reliant Corporation of Houston to attempt to discredit my investigative reports on their frighteningly dangerous operation of nuclear plants. (A judge in Holland threw the book at them.) 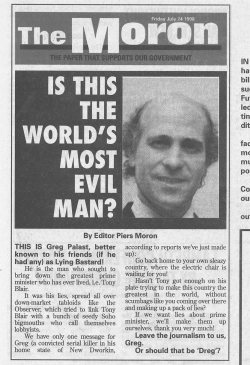 Maybe you don’t care; but you should.  Reliant is the company, under a new corporate alias, which has just been approved to receive the first multi-billion-dollar loan guarantee from the Obama Administration to build a new nuclear plant.  (Reliant’s partner, by the way, is Tokyo Electric Power.)
Obviously, there’s a hell of a lot more to this story.  I could write a book – and I am.  I’ve decided that, in the public interest, I will add a chapter to the book about Pus Moron, the nuclear hucksters of Houston and why it was that I was half undressed.  (There really is an innocent, or nearly innocent, explanation, I promise you.)
Of course, by time my book comes out in November, Piers may no longer be prancing about on CNN, but breaking rocks on a chain gang.  However, CNN is reported as concluding that Morgan’s fibs and fabrications – this is Morgan’s third run-in with the law – would have “no effect” on his hosting on their network.  This only confirms my experience with US television executives that when they need a new on-air journalist, they just wait for a toilet to overflow.

*****
Greg Palast’s investigative reports for BBC Newsnight can be seen at www.GregPalast.com.  Sign-up there for information on Palast’s forthcoming book, Vultures’ Picnic.   Have information regarding Morgan, Mandelson or Reliant Corporation and its nuclear operations? Please go to www.GregPalast.com, click on “contact Greg.”
Palast wishes to congratulate his colleagues at Newsnight and especially investigative producer extraordinaire Meirion Jones for ripping the media shield off Morgan.  We look forward to Part 2. 🙂
Subscribe to Palast’s Newsletter and podcasts.
Follow Palast on Facebook and Twitter.
GregPalast.com