Why Did Mail-in Ballots in Georgia Plunge by One Million?
State’s New Law forced Runoff in Senate Race

Absentee ballots plunged from a total of 1.28 million in November 2020 to a little over 240,000 in last week’s General Election in Georgia.

Given that mail-in ballots in Georgia favor Democrats two-to-one, it is reasonable to conclude this breathtaking 81% drop of over one million mail-in votes likely cost Sen. Raphael Warnock an outright victory. Georgia law requires a candidate to win by 50% of the vote plus one.

Though incumbent Warnock led his Republican challenger Herschel Walker by 35,202 votes, that still places him 23,000 votes short of the 50% threshold. As a result, Warnock is now forced into a runoff with Republican Herschel Walker.

Despite its massive size, the one-million vote decline was fogged over by press releases by Georgia’s Republican Secretary of State who announced, “Georgia’s record breaking early turnout concluded with 2,288,889 voters casting their ballot during Early Voting.”

How could the media have missed the one-million vote elephant that disappeared from the room? Without reading the fine print — early voting reports commonly include absentee ballots received — this supposed jump in early voting was quoted without qualification.

This chimerical leap in voting was touted by Gov. Brian Kemp as a response to accusations by voting rights attorneys, including Gerald Griggs of the NAACP, that the 98 pages of restrictions to voting incorporated in Georgia’s new voting law, Senate Bill 202, suppressed minority voting.

In his victory speech, Kemp said, “Senate Bill 202, Georgia’s Election Integrity Act — you remember, they called it ‘Jim Crow 2.0,’ and ‘Jim Crow with a suit and tie’ — according to the media, President Biden, and their far left allies. If you support photo ID on absentee ballots, you’re a racist,” a charge put to rest by the alleged leap in voting.

Key provisions of SB 202 included substantial new restrictions on casting mail-in ballots, a voting method now favored by minority — read, Democratic — voters. It was crafted by the GOP-controlled legislature and signed by Kemp last year just after the Democrats swept the state with victories by Joe Biden and Senate candidates Warnock and Jon Ossoff.

Among the provisions of SB 202 that cut into the mail-in vote:

In November 2020, Warnock received 601,522 absentee votes by mail versus his Republican opponent’s 249,090 absentee votes, a ratio of more than two to one in the Democrat’s favor. The two-to-one advantage in mail-in votes was repeated in the January 2021 runoff. 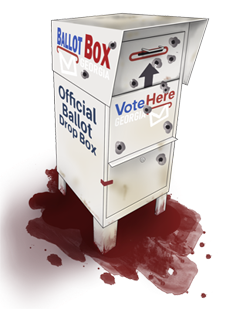 While the turnout in the 2020 election and 2021 runoffs soared, the GOP legislature apparently was not happy with the preferences of those who turned out — overwhelmingly Democratic blue.

With the change in law since he ran in 2020, Warnock’s mail-in vote this year fell over a cliff to 164,282, a drop of 73%. While the Republican absentee vote also fell (to only 18,545 mail-in votes for Walker statewide), the drop in mail-ins resulting from the new law mainly punished Warnock.

The decline in mail-in balloting, especially those returned to dropboxes, has a distinct racial tinge. Georgia’s biggest counties by population, Fulton and Cobb, both majority non-white, saw mail-in balloting dive from 259,000 to just 43,000. In those two counties, absentee voters chose Warnock over his opponents by five-to-one.

In Atlanta, Kendra Davenport Cotton, CEO of voting rights group New Georgia Project, concluded from the mail-in data that, “Unequivocally, Warnock would not be in a runoff without vote suppression.”

Dropboxes, Mules, and ‘The Big Lie’

The push to ban universal mail-in balloting and the virtual elimination of dropboxes has been promoted nationwide by the film 2000 Mules. The documentary, launched earlier this year at Mar-a-Lago by former President Donald Trump, purports to show Black men, whom they term “mules,” who were allegedly paid $10 for each of thousands of stolen ballots stuffed into dropboxes.

2000 Mules, following the so-called investigation of self-proclaimed vigilante vote fraud hunters, centered on dropboxes in Fulton County. Trump and the accusations in the film forced a massive, costly audit of every ballot cast in Fulton. Georgia’s voting chief Brad Raffensperger said that, “Law enforcement officers with my office and the Georgia Bureau of Investigation have been diligently investigating all claims of fraud or irregularities and continue to investigate. Their work has shown me that there is nowhere close to sufficient evidence to put in doubt the result of the presidential contest in Georgia.” 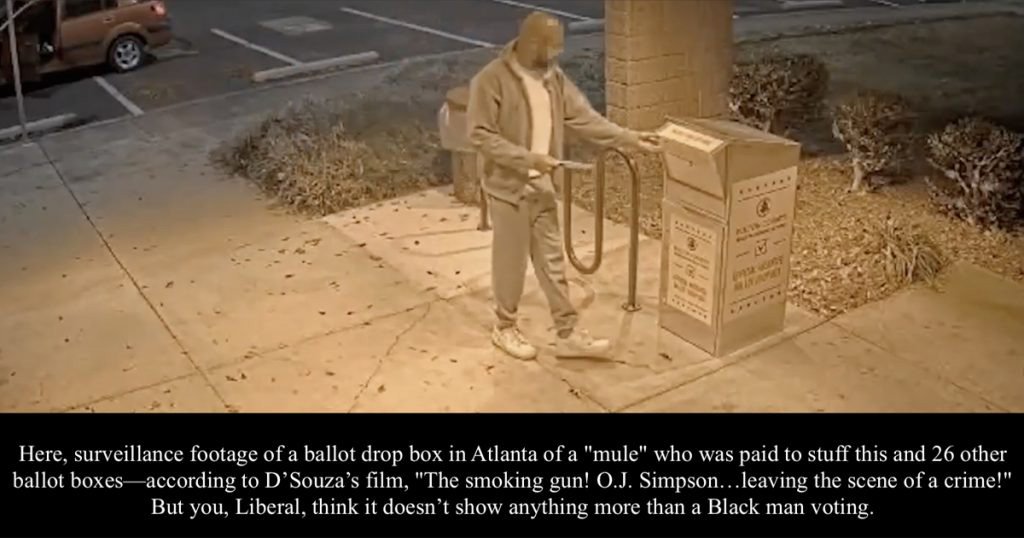 Nevertheless, despite finding no meaningful fraud in mail-in voting, Raffensperger and his boss Kemp pushed SB 202, slashing access to the absentee balloting favored by Black voters.

Georgia’s new rules on mail-in balloting threaten to have an even greater effect on the outcome of the runoff for the Senate seat scheduled for December 6. SB 202 slashed the time between the General election to just one month from two months, squeezing the time when ballots can be requested and returned.

In addition, Georgia’s GOP officials are now claiming the law bars voting on the two weekends before the runoff. This is one further hindrance to the ability of “Souls to the Polls” voters to reach the dropboxes which will be locked away those Sundays.

This article was originally published on Truthdig (www.Truthdig.com) 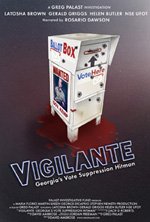 You demanded it. You got it. Watch our film:
Vigilante: Georgia’s Vote Suppression Hitman
We’re making it FREE to get it out in Georgia for the next two weeks only at:

Vigilante is introduced by Martin Sheen and narrated by Rosario Dawson.
Support our work by donating for a signed DVD of the film.
Or make a simple donation no matter how large or small to help us get the word out!