Look up your Name on the Crosscheck Voter Purge-List 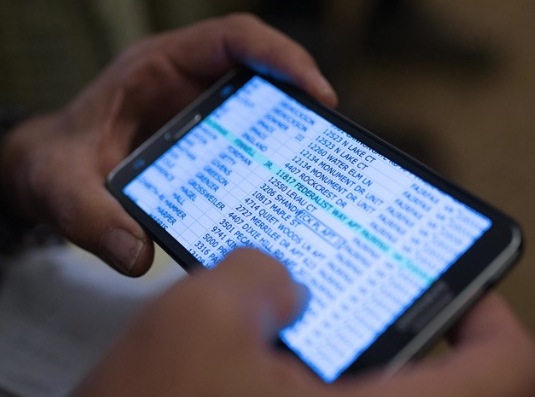 My investigative report, JIM CROW RETURNS: Millions of Minority Voters Threatened by Electoral Purge, is the most-read story ever on Al Jazeera America’s website.
If you haven’t read it yet – the results of a six-month intensive investigation – read it now.
On Oct 29 & 30, Al Jazeera America aired Palast’s TV 2-Part report on this new voter purge.
The Palast team has ripped the lid off “Interstate Crosscheck” – a system used by 27 states, almost all under Republican control, which claims to find illegal “double voters,” those who vote in the same election in two different states.
It took us months, but we got our hands on 2.1 million of the names of the so-called “double voters” accused by Crosscheck.

Are YOU a criminal double voter?

What we found is that Crosscheck is simply a list of common first and last names.  And the list is a sloppy, absurd mess. Over a million and half of these alleged double voters have mis-matched middle names.  Social security numbers are rare – and all mismatches ignored.
Here’s a random “double voter”:  Chris Jarvis Jackson of Georgia supposedly is the same voter as Chris Laquon Jackson of Virginia.

And guess the color of the double-voting criminals?  ONE IN EIGHT VOTERS OF COLOR in the 27 Crosscheck states are on the list.  Why?  Because, says the US Census, Asian-Americans, Hispanics and African-Americans are 80% more likelyto share a common name (one of the top 1000 surnames) than a white American.  Nearly a fifth of all Asian-Americans use one of just 30 names (Chung, Lee, Patel, Kim, Ho, Park etc.).
This new purge game, simply a bigger, uglier, yet more sophisticated version of Katherine Harris’ fake “felon” purge of 2000, can easily determine the control of the US Senate in this Tuesday’s races.  Battleground state Georgia has tagged over half a million of its voters, especially Black and Asian-American citizens, as suspected criminal double voters.
North Carolina, where a Senate race is in the balance, is gunning for 190,000 voters, including, for example, Kevin Antonio Hayes of North Carolina””who supposedly voted a second time, in Virginia, as Kevin Thomas Hayes. I met one Mr. Hayes at his home in East Durham. He swears he has never used the middle name “Thomas” – and that he didn’t vote twice.  Indeed, according to Crosscheck’s own records, he didn’t vote once!
Please pass on this note and these links – before you vote Tuesday.
* * * * * *
For 15 years, Greg Palast has been uncovering voter suppression tactics in investigative reports for BBC Television, The Guardian, Harper’s and Rolling Stone.
Greg Palast is the author of several New York Times bestsellers including The Best Democracy Money Can Buy and Billionaires & Ballot Bandits.
Get a signed copy of Palast’s latest film Vultures and Vote Rustlers.
Make a tax-deductible donation and support our ongoing investigation into voter suppression.
Subscribe to Palast’s Newsletter and podcasts.
Follow Palast on Facebook and Twitter.
www.GregPalast.com