I hope you savored the moment. Yesterday, Monday December 11, voting rights advocate John Brakey won a court order – in Montgomery, Alabama no less – requiring every county to keep copies of their ballots after the voting Tuesday.
Now, you may think that in a democracy, in the United States of America, in the 21st Century, you wouldn’t simply throw away ballots, announce a winner, and say, “trust us, we counted the ballots fairly.”
But this is not exactly America, nor the 21st Century.  This is Alabama; Alabama after the 2013 Supreme Court ruling that gutted the Voting Rights Act.
Then, by 6pm Alabama time, the voting rights victory dance came to an end. GOP state officials, in an “ex-parte” (i.e. private) meeting with an Alabama Supreme Court judge, obtained a “stay” of the ballot protection, effectively killing it. Alabama counties may now destroy ballot images, destroy any record of the true vote.
But they’ll tell you the winner: Likely Republican Judge Roy Moore, the former chief of the court that just blocked any possible challenge to a suspect election.
Even without Judge Moore’s cronies taking away this protection of voter ballots, the GOP had nine other methods already in motion to prevent a true and fair election. If the Democrat Doug Jones loses, it won’t be to Judge Moore; rather, it will be to Jim Crow and the ten little cheats perfected by the GOP.

Before you read on about vote theft way down south in Dixie, get the full vote-heist story, captured on film in Alabama.  It’s in the post-election edition of the movie, The Best Democracy Money Can Buy: The Case of the Stolen Election.
No, it’s not the one on Amazon or iTunes.  This is the NEW update–#TrumpStoleIt edition, which will go commercial next year.
But right now, you can ONLY get it by making a tax-deductible donation to the Palast Investigative Fund.
Donate $20 or more and get the download. Or donate $50 for a personalized, signed DVD as a heartfelt thank you from me. Or you can simply support our work for any amount no matter how large or small.
We didn’t get to Alabama by flapping our arms-we had to pay for tickets, cameras, lawyers, and feed our team of indefatigable detectives.
It is our habit, by instinct and long experience to get to the places where news will be made. Help us continue the hunt.
Now, read on.

Ballot-box stuffing
The TRO (Temporary Restraining Order) that Brakey won, then lost, would have stopped what I call the “Baldwin Ballot Bandit” trick or, as my co-author Bobby Kennedy calls it, “good old ballot box stuffing.”
Background:  In 2002, Gov. Don Siegelman won a close re-election. But, after the Associated Press announced the result, rural Republican Baldwin County locked the courthouse doors. Beginning at midnight, GOP officials claimed to have counted thousands of ballots that they mysteriously “found”-enough to flip the election.  No one was allowed to see those ballots-if they even existed.
This is what the Brakey TRO intended to stop.
[For the full story of the Baldwin County Ballot theft, see “Stuffed,” by Bobby Kennedy Jr..  It’s chapter 28 of The Best Democracy Money Can Buy, a Tale of Billionaires & Ballot Bandits, the 2016 edition of my bestseller.  Donate $50 for the book and I’ll sign it to you with my thanks.]
So, how will they steal it?  Let me count the ways (nine of them). 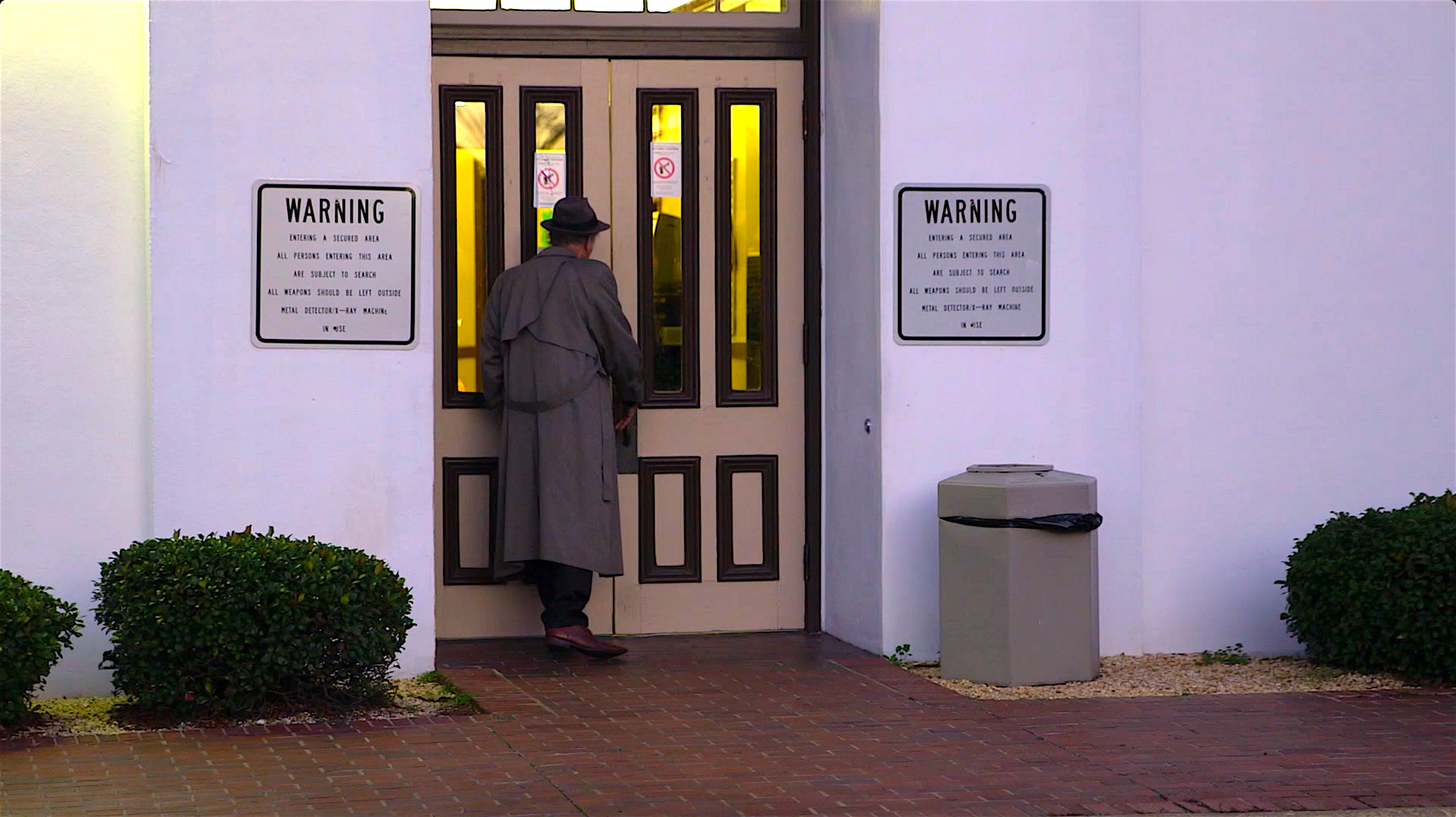 [Photo:  Palast trying to get into an Alabama DMV in Lowndes County””73% black.  Locked tight.]
The ID con.  Within hours of the Supreme Court slicing up the Voting Rights Act of 1965, Alabama passed a law requiring all voters to have a photo ID from a DMV (Department of Motor Vehicles).  And the very next day, the state shut down almost every DMW in the ten Black-Belt counties.
“Caging.”  It’s a felony crime, but that didn’t stop Judge Moore’s campaign chief, Brett Doster, from committing this vote theft crime for the George W. Bush campaign in 2004.  I know, because I have Doster’s own confidential emails.
(How I got them ”“ well, that’s another story. You’ll just have to read the book.) Here’s a bit of one of the emails.  Bobby Kennedy Jr explains how this – caging trick steals votes (from The Best Democracy Money Can Buy): 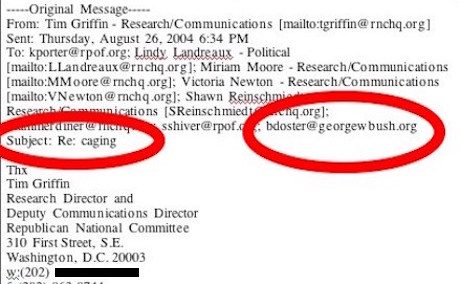 Crosscheck.  In 2015 I got a call from Hank Sanders of Selma, Alabama.  His name was missing from the voter rolls.  That’s Senator Hank Sanders.  Despite his post, he’d been removed mysteriously.  I flew down and solved the mystery.  The perp:  Donald Trump’s operative, Kris Kobach of Kansas.
Kobach created a list of 239,801 Alabamians he tagged as “potential” duplicate voters.  I got my hands on about a third of that list ”“ how? don’t ask – and it’s overwhelmingly names of Black, Hispanic and Asian-American voters.  Yet, Alabama has arrested not one double voter.  It’s Jim Crow all over again.
“Spoiling.”  The Alabama ballot has nothing on the ballot but the Senate race and, in some counties, a local referendum.  But it also has a box for “party-line” votes.  Vote for “Democratic Party” and also vote for the Democratic candidate, your vote can be tossed in the “spoilage” bin, not counted, because they can decide, arbitrarily, that you “over-voted” -voted twice.  It’s a technical gotcha that is used selectivelyi.e. against Black voters.
I saw the “over-vote” spoilage trick eliminate 700 Al Gore votes in Gadsden County, Florida in 2000.  (That’s more than the 537 votes that supposedly elected George W. Bush.)
And I saw it again in November 2016 in Detroit, Michigan, where 70,355 ballots were not counted (in part, because of the same over-vote trick).  Throwing out those Detroit ballots gave Donald Trump a supposed 10,700 margin to win Michigan.
OK, let’s review:  There’s
1. Ballot stuffing
2. Crosschecking
3. Caging
4. Spoiling
5. Blocking (the ID con)…
…and five more tricks, including that old GOP standby, purging “ex-cons” not allowed to vote.  Except I’ve yet to find an ex-con purge list that’s anything other than a con itself.
I simply can’t describe every trick in this small space.  You’ll have to read the book or see the film.
There’s one certain way to stop these vote suppression games.  One candidate, named Barack Obama, told our team:  You can’t steal all the votes all the time.  Turn out so massively, they just can’t steal it.
Martin Luther King Jr led 35,000 marchers over the Pettus Bridge in Selma, Alabama, to the capital Montgomery.  Along the way, four marchers were murdered by the Klan.  But by time the marchers got to the capital, the Voting Rights Act was on its way into law.
A young Hank Sanders was there.  Last year, making the film with him, the elder Senator Sanders demanded I walk over the Pettus bridge with him.  “You have to walk over the bridge every chance you get-because the right to vote is always in jeopardy.”
We will see if enough Alabama citizens will cross that bridge tomorrow to overcome the trickery and flim-flam that Alabama calls an election.
* * * * *
Greg Palast has written four New York Times bestsellers, including Armed Madhouse, Billionaires & Ballot Bandits, and The Best Democracy Money Can Buy, now a major non-fiction movie, available on Amazon – and can be streamed for FREE by Prime members!
Stay informed, get the signed DVD of the updated, post-election edition of The Best Democracy Money Can Buy: The Case of The Stolen Election, a signed copy of the companion book – or better still, get the Book & DVD combo.
Support The Palast Investigative Fund  and keep our work alive!  Become a monthly contributor and automatically receive Palast’s new films and books when they’re released!
Or support us by shopping with Amazon Smile. AmazonSmile will donate 0.5% of your purchases to the Sustainable Markets Foundation for the benefit of The Palast Investigative Fund and you get a tax-deduction! More info .
Subscribe to Palast’s Newsletter or his separate list for Poems & Stories.
Follow Palast on Facebook, Instagram, and Twitter.
GregPalast.com