Joseph Stiglitz couldn’t believe his ears.  Here they were in the White House, with President Bill Clinton asking the chiefs of the US Treasury for guidance on the life and death of America’s economy, when the Deputy Secretary of the Treasury Larry Summers turns to his boss, Secretary Robert Rubin, and says, “What would Goldman think of that?”
Huh?
Then, at another meeting, Summers said it again:  What would Goldman think? 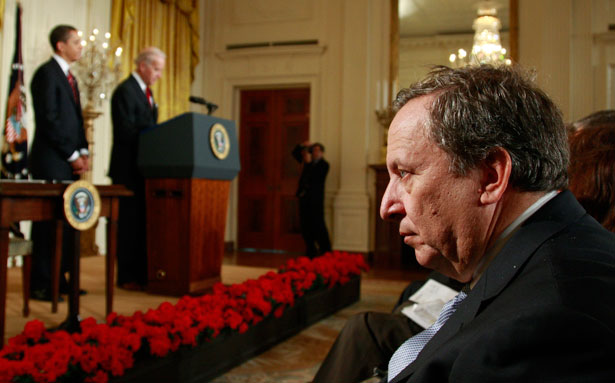 A shocked Stiglitz, then Chairman of the President’s Council of Economic Advisors, told me he’d turned to Summers, and asked if Summers thought it appropriate to decide US economic policy based on “what Goldman thought.”  As opposed to say, the facts, or say, the needs of the American public, you know, all that stuff that we heard in Cabinet meetings on The West Wing.
Summers looked at Stiglitz like Stiglitz was some kind of naive fool who’d read too many civics books.

R.I.P. Larry Summers
On Sunday afternoon, facing a revolt by his own party’s senators, Obama dumped Larry as likely replacement for Ben Bernanke as Chairman of the Federal Reserve Board.
Until news came that Summers’ torch had been snuffed, I was going to write another column about Larry, the Typhoid Mary of Economics.  (My first, in The Guardian, 15 years ago, warned that “Summers is, in fact, a colony of aliens sent to Earth to turn humans into a cheap source of protein.”)
But the fact that Obama even tried to shove Summers down the planet’s throat tells us more about Obama than Summers – and whom Obama works for.  Hint:  You aren’t one of them.
All these Cabinet discussions back in the 1990s requiring the blessing of Goldman Sachs revolved around the Rubin-Summers idea of ending regulation of the US banking system.  To free the US economy, Summers argued, all you’d have to do is allow commercial banks to bet government-guaranteed savings on new “derivatives products,” let banks sell high-risk sub-prime mortgage securities and cut their reserves against losses.

What could possibly go wrong?
Stiglitz, who would go on to win the Nobel Prize in Economics, tried to tell them exactly what would go wrong.  But when he tried, he was replaced and exiled.
Summers did more than ask Rubin to channel the spirit of Goldman: Summers secretly called and met with Goldman’s new CEO at the time, Jon Corzine, to plan out the planet’s financial deregulation. I’m not guessing:  I have the confidential memo to Summers reminding him to call Corzine.
[For the complete story of that memo and a copy of it, read “The Confidential Memo at the Heart of the Global Financial Crisis“.]
Summers, as Treasury official, can call any banker he damn well pleases.  But not secretly.  And absolutely not to scheme over details of policies that could make a bank billions.  And Goldman did make billions on those plans.
Example:  Goldman and clients pocketed $4 billion on the collapse of “synthetic collateralized debt obligations” – flim-flam feathers sold to suckers and dimwits i.e. the bankers at RBS.  (See Did Fabrice Tourre Really Create The Global Financial Crisis?)
Goldman also cashed in big on the implosion of Greece’s debt via secret derivatives trades permitted by Summers’ decriminalization of such cross-border financial gaming.
The collapse of the euro-zone and the US mortgage market caused by Bankers Gone Wild was made possible only by Treasury Secretary Summers lobbying for the Commodities Futures Modernization Act which banned regulators from controlling the 100,000% increase in derivatives assets, especially super-risky “naked” credit-default swaps.
The CMFA was the financial equivalent of a fire department banning smoke alarms.
Summers took over the Treasury’s reins from Rubin who’d left to become director of a strange new financial behemoth:  The combine of Citibank with and an investment bank, Travelers. The new bank beast went bankrupt and required $50 billion in bail-out funds.  (Goldman did not require any bail-out funds – but took $10 billion anyway.)
Other banks-turned-casinos followed Citi into insolvency.  Most got bail-outs … and got Larry Summers – or, at least, Larry’s lips for “consulting” or for gold-plated speaking gigs.
Derivatives trader D.E. Shaw paid Summers $5 million for a couple of years of “part-time” work.  This added to payments from Citigroup, Goldman and other finance houses, raising the net worth of this once penurious professor to more than $31 million.

Foreclosure fills the Golden Sacks
When Summers left Treasury in 2000, The New York Times reports that a grateful Rubin got Summers the post of President of Harvard University – from which Summers was fired. He gambled away over half a billion dollars of the university’s endowment on those crazy derivatives he’d legalized.  (Given Summers’ almost pathological inability to understand finance, it was most odd that, while President of the university, he suggested that humans with vaginas aren’t very good with numbers.)
In 2009, Summers, Daddy of the Deregulation Disaster, returned to the Cabinet in triumph. Barack Obama crowned him “Economics Tsar,” allowing Summers to run the Treasury without having to be questioned by Congress in a formal confirmation hearing.
As Economics Tsar in Obama’s first term, did Summers redeem himself?
Not a chance.
In 2008, both Democrat Hillary Clinton and Republican John McCain called for using the $300 billion remaining in the “bail-out’ fund for a foreclosure-blocking program identical to the one Franklin Roosevelt had used to pull the US out of the Great Depression.  But Tsar Larry would have none of it, although banks had been given $400 billion from the same fund.
Indeed, on the advice of Summers and his wee assistant, Treasury Secretary Tim Geithner, Obama spent only $7 billon of the $300 billion available to save US homeowners.

What would Goldman think?
As noted, Goldman and clients pocketed billions as a result of Obama’s abandonment of 3.9 million families whose homes were repossessed during his first term.  While American homeowners were drowning, Tsar Summers torpedoed their lifeboat:  a plan to prevent foreclosures by forcing banks to write-off the overcharges in predatory sub-prime mortgages.  Notably, Summers’ action (and Obama’s inaction) saved Citibank billions.

Loan Shark Larry
The deregulation disaster machinery is not done with mangling Americans.  While not-for-profit credit unions, lenders of last resort for working people and the poor in the US, have been under legal and political attack, a new kind of banking operation has bubbled out of the minds of the grifters looking for a way to make loan-sharking legit.
One new outfit, for example, called “Lending Club,” has figured out a way to collect fees for arranging loans charging as much as 29%.  Lending Club claims it cannot and should not be regulated by the Federal Reserve or other banking police.  The recent addition to its Board of Directors:  Larry Summers.
If you want to know why Obama would choose such a grifter and gamer to head the Fed, you have to ask, Who picked Obama?  Ten years ago, Barry Obama was a nothing, a State Senator from the South Side of Chicago.
But then, he got lucky.  A local bank, Superior, was shut down by regulators for mortgage shenanigans ripping off Black folk.  The bank’s Chairwoman, Penny Pritzker was so angry at regulators, she decided to eliminate them:  and that required a new President.
The billionaires connected Obama to Jamie Dimon of J.P. Morgan, but most importantly to Robert Rubin, former Treasury Secretary, but most important, former CEO of Goldman Sachs and mentor of Larry Summers.  Without Rubin’s blessing and overwhelming fundraising power, Obama would still be arguing over zoning on Halsted Street.
Rubin picked Obama and Obama picks whom Rubin picks for him.
Because, in the end, Obama knows he must choose a Fed chief based on the answer to one question:  What would Goldman think?
* * * * * * * *
Special thanks to expert Lori Wallach of Public Citizen without whom our investigation could not have begun.
For the complete story of the investigation of Larry Summers, the “End Game” memo and the finance crisis, see Palast’s highly acclaimed book Vultures’ Picnic.
Get a signed hardbound copy and support our work with a tax-deductible contribution of $50.
Also visit the Palast Investigative Fund’s store or simply make a tax-deductible contribution to keep our work alive!
Greg Palast is also the author of the New York Times bestsellers, Billionaires & Ballot Bandits, The Best Democracy Money Can Buy and Armed Madhouse.
Subscribe to Palast’s Newsletter and podcasts.
Follow Palast on Facebook and Twitter.
www.GregPalast.com