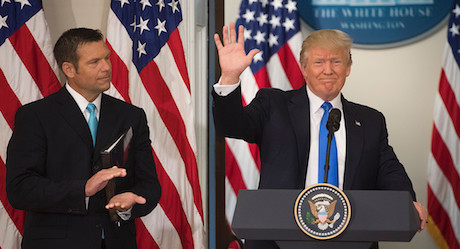 Progressives are always looking for a “victory,” a pony hiding in the horseshit. We saw this when most states claimed to reject Kris Kobach’s request to turn over their voter rolls. In fact, governors were lying (Mississippi and Louisiana) or too ignorant (Virginia) to know their states had already given Kobach their voter rolls.
The New York Times and other Democratic Party megaphones declared victory when Trump shut down the Presidential Committee on Election Integrity and moved it into Homeland Security.
But this was Kobach’s original plan. In January of last year, Kobach gave Trump a scheme to use the cloak of darkness provided by Homeland Security to do its dark magic on US voter rolls.
Specifically, Homeland Security could hunt for “aliens” on the voter rolls by matching the names of the deported, such as Jose’ Hernandez, with any Jose’ Hernandez on voter rolls in Arizona or any other swing state.
Kobach’s plan was not some panel with cameras and open record requests and meetings announced in the federal register.
So, once again, Kobach is ahead of the Democrats. His “Crosscheck” purge system elected Donald Trump; now, adding in a bogus hunt for “alien” voters, he’ll guarantee the GOP’s lock on Congress in 2018.
The NY Times ridicules the Kobach/Trump illegal voter hunt, dismissing it as laughable. Except that voter rolls have already been purged by more than two million. So, who’s laughing?
For more on Kobach and Crosscheck get the updated, post-election edition of our hit film, The Best Democracy Money Can Buy: The Case Of The Stolen Election.
* * * * *
Before turning to journalism as an investigative reporter for The Guardian and BBC Television, Greg Palast was an investigator of fraud and racketeering for governments and labor unions worldwide. Known as the reporter who exposed how Katherine Harris and Jeb Bush purged thousands of Black voters from Florida rolls to steal the 2000 election for George Bush. Palast has written four New York Times bestsellers, including Armed Madhouse, Billionaires & Ballot Bandits, and The Best Democracy Money Can Buy, now a non-fiction movie.
Stay informed, get the signed DVD, a signed copy of the companion book – or better still, get the Book & DVD combo.
Visit the Palast Investigative Fund store or simply make a tax-deductible contribution to keep our work alive! Alternatively, become a monthly contributor and automatically receive Palast’s new films and books when they’re released!
Or support the The Palast Investigative Fund (a project of The Sustainable Markets Foundation) by shopping with Amazon Smile. AmazonSmile will donate 0.5% of your purchases to the Palast Fund and you get a tax-deduction! More info.
Subscribe to Palast’s Newsletter. Follow Palast on Facebook and Twitter.
GregPalast.com