When we last parted, Kobach was screaming, “Liar! Liar!” while backing away to escape from me, the plastic spoon from the vanilla ice cream still in his mouth. 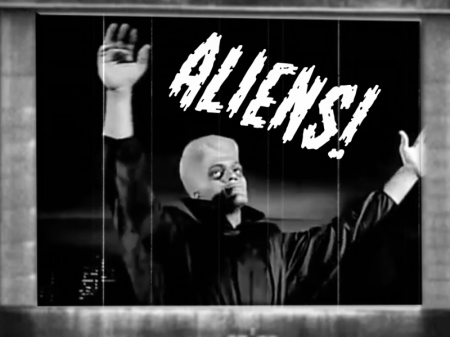 I had hired a combat-trained cameraman from Paris to join me on this fraught assignment for Rolling Stone: to film white people in their natural habitat, what anthropologists call an “Ice Cream Social,” a Republican Party fund-raiser in Wichita, Kansas—and get out alive.

OK, that was a little over-the-top, but then, Kobach had just founded a company to make “family-friendly” automatic weapons (which he claimed would not have to be registered). And he’d bolted a 50-caliber machine gun to the top of his jeep.

I could see Kobach’s minions under a tent in the park scooping out the ice cream: no chocolate, only vanilla. Of course.

I played a local TV reporter with one of those cubes on the microphone with the number 4 on it, “Blindwitness News” or whatever NBC calls it. My lame disguise worked.

I shook Kobach’s hand—and wouldn’t let go until I was in good body-blocking position. When I put on my fedora, Kobach recognized me and would have bolted . . . except for the Pledge of Allegiance. He had to freeze in place, hand over heart: “. . . Under God, with liberty and justice for all.”

It was 2016, and I’d been on Kobach’s trail, him ducking, for three years. Why Kansas? Why Kobach?

Because Kris Kobach was more responsible than any other person in America for putting Donald Trump into the White House. And Trump was more than appreciative.

In 2016, Republicans had a problem: there simply weren’t enough white guys to elect Donald Trump. The Census reports that the white vote has dropped by a fifth, from 87.6% in 1980 to 73.3% of the voting population in 2016. (Not every white guy votes Republican, so 73.3% white is not enough for the GOP to feel secure.)

So there was only one way for the GOP to win in 2016, and the only way they can win in 2020: eliminate non-white voters.

And Kobach has The Erasers, the magic ways to simply remove a couple million wrong-colored voters from the voter rolls. By the time I shook his hand in 2016, one of his schemes—Crosscheck (we’ll get to that)—had already purged 1.1 million from the rolls, too many of them Black, Hispanic and Asian-American, quite silently, in Michigan, Ohio, North Carolina and 26 other states, a stealth purge crucial to Trump’s victory.

In 2020, Kobach may choose our president for us again. Kobach has Trump’s ear—and, God help us, Trump listens.

Kobach had been working on whitening the voter rolls, and whitening America, since college days. He was the lawyer for FAIR (Federation for American Immigration Reform) whose founder stated its purpose was to maintain “a European-American majority.”

Kobach had drafted Arizona’s infamous SB1070 Act, dubbed the “Driving While Brown” law by the ACLU, and he was the legal advisor to Arizona Sheriff Joe Arpaio, who was found guilty of criminal violation of the Civil Rights of Hispanic Americans.

Kobach’s alien hunt was lucrative. He drafted a law for Farmers Branch, Texas, which banned sales to “illegal immigrants,” like selling one a Slurpee. Kobach pocketed a $100,000 fee and the town nearly went bankrupt when the courts found the law unconstitutional.

Kobach proudly told me he’s the one who convinced Trump that Mexico would pay for The Wall.

Kobach is a wizard with databases and demographics. Fresh out of school, he was hired by the Department of Homeland Security, where he created a database that tracked Muslims as they traveled across the US. President George W. Bush found it so disturbingly racist that the President personally ordered Kobach’s Muslim tracker shut down. (Kobach had the last word: it was he who suggested Trump’s Muslim travel ban.)

Though caged by Bush, Kobach’s dark arts would soon be unchained.

Because, beginning in 2011, beside his side gig as an arms dealer, Kobach became Kansas’ Secretary of State, the man who decides who’s allowed on the voter rolls and who gets erased, purged.

And his creative use of that power has given him huge influence to spread his purge gospel and spreadsheets to other states through the Republican Secretaries of State Committee, a group almost as influential in determining our president as the Electoral College.

And then those illegals [aliens] get out and vote, because they vote anyway. Don’t kid yourself. Those numbers in California and numerous other states, they’re rigged. They’ve got people voting that shouldn’t be voting.
Once they arrive, the Democrat Party’s vision is to offer them free health care, free welfare, free education, and even the right to vote. 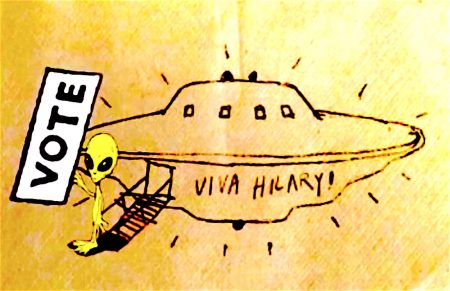 But Kobach is ready for them. For the 2020 election (and especially 2024 and 2028—yes, they think that far ahead), Kobach has authored laws in Arizona, Alabama and Kansas which require Americans to prove we’re Americans in order to vote. That is, the laws require “proof of citizenship” to register to vote.

Sounds reasonable. Only citizens should vote. So what’s wrong with proving you’re a citizen to vote?

The problem for voters is that this is not Red China: we don’t have citizen cards nor citizenship chips in our skulls. (Not yet.)

So for tens of millions of Americans, proving you’re a citizen is a bitch. The only documents that prove citizenship in America are a passport and certified birth certificate. Not many homeboys in the projects have their passports from their ski vacations in the Alps. And a whole lot of Americans can’t find their original birth certificates, if they ever had one. 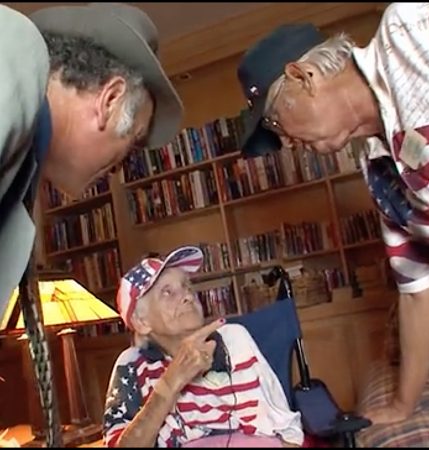 Kobach’s proof-of-citizenship went for a test drive in Arizona. His supporters claimed the law would also stop terrorists from entering the US to vote. About 30,000 Arizonans lost their right to vote. All Americans, but hey, we all have to sacrifice something unless we want Al-Qaeda to choose our school board.

In 2008 I investigated these skanky illegals myself in Arizona, including Shirley Preiss, who claimed she was born before birth certificates were given out in rural backwoods. My interrogation was not easy: Shirley, at 97 years old, was having a hard time hearing. She wore a dress and hat printed with American flags—but she couldn’t fool me.

“Shirley, are you a terrorist?”
“Errorist?”
Her son, no spring chicken himself, shouted into her ear: “Terrorist! You blow up buildings, Mom?”
END OF EXCERPT 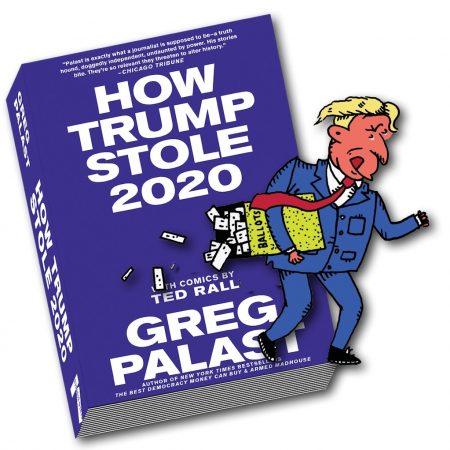 Read the full story in How Trump Stole 2020 and find out how to protect your vote.