Killer Lines, Killer Cops, and Trump’s Vote-Heist Dress Rehearsal
The hidden, ugly story of the new Jim Crow tactics tested in the recent primaries—and coming soon to a state near you.

Jerry Thomas got his Georgia Primary ballot on June 10. The Primary Election was June 9.

Getting shafted out of your vote is not unusual for an African-American like Mr. Thomas. What’s unusual is that Mr. Thomas’s wife, Andrea Young, is the executive director of the American Civil Liberties Union of Georgia.

Young knows that her husband’s story was repeated thousands of times in Black households. And she is raising hell about it.

And that’s how Trump stole the 2020 election. Because what the press calls the “meltdown” in Georgia (and in the Wisconsin and Kentucky primaries) was very much a dress rehearsal for the plan for minority voting hell in November, not only in Georgia but in a slew of other GOP-controlled swing states.

Don’t pull out your hair: this ballot burglary can be busted—as long as we understand the crafty new mechanisms of the vote heist caper that the GOP took for a field test in Georgia. 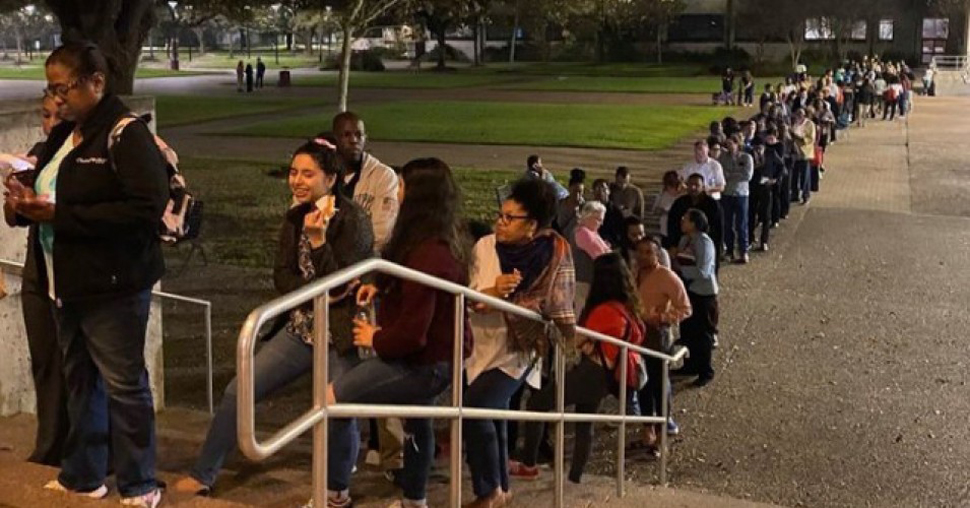 There’s the nasty little secret of American elections: not every vote gets counted. (Photo: Allyn West)

Question: Why did Black voters Atlanta wait hours in line and risk catching a fatal virus?

Answer: You can’t mail in your ballot unless it’s mailed to you in the first place.

According to an MIT study, a breathtaking 22% of all mail-in ballots are never counted. Mostly, absentee ballots don’t get counted because they were never received in the first place or, as for Mr. Thomas, sent late.

However, the “un-count” is huge because some states are simply refusing absentee ballots to hundreds of thousands of registrants—or, not sending cards that allow the voter to ask for the mail-in ballot.

Georgia is one of the GOP’s ballot-refusing champs. The state refused to send mail-in ballot requests to over a quarter million voters on their so-called “inactive” voter list.

An “inactive” voter is a citizen who chose not to vote in a couple elections. In America, you have a right to vote—or not to vote. Indeed, the National Voter Registration Act says in crystal clear terms, that a state “shall not remove any person from the official list of voters registered to vote… by reason of the person’s failure to vote.”

Then there’s the much bigger list of citizens also denied ballots: The Purged.

In 2018, Georgia purged, that is, erased the registrations of, over half a million citizens on the grounds they’d left Georgia or moved from their home county.

Seems reasonable: you shouldn’t vote in Savannah if you don’t live there.

But there’s more than a wee problem with this list of “movers”—they didn’t move. The Palast Investigative Fund retained John Lenser and company, the nation’s top “advanced address list hygiene” experts—the folks used by Amazon and Ebay to confirm your address. The experts determined that 340,134 Georgia “movers” who lost their vote had, in fact, never moved from their registration address. 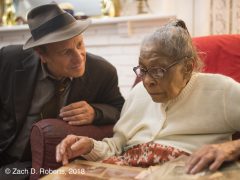 A deep evil of this purge of “movers” is that they don’t know they’ve lost their registration. I was with voter Christine Jordan in November 2018 when the 92-year-old was given the heave-ho from an Atlanta polling station. Jordan had voted there in every election since 1968—the year her cousin Martin Luther King Jr. was murdered.

Those lines of African-American voters you saw in Atlanta this month waiting five hours were not the result of poor local planning. The deadly line disaster was directly tied to thousands of Georgians, according to Atlanta NAACP attorney Gerald Griggs, not receiving their absentee ballots—”The Purged,” the “Inactive,” and the many Mr. Thomases whose mail-in ballots were fatally delayed.

Without their ballots, voters had no choice but to wait those hours in humid rain. Then, at the end of the wait, many are, to their surprise, told to scram (as Ms. Jordan had been)—or given a “provisional” ballot.

A better name for provisional ballots would be “placebo ballots”—because they let you think you’ve voted, but you haven’t. In 2016, the Elections Assistance Commission reported that of 2.5 million provisional ballots cast, 925,973 were rejected, nearly a million votes tossed in the electoral dumpster.

In Georgia, I saw the racial provisional ballot game in action.

Just before Ms. Jordan was given the heave-ho, Raheim Shabazz was also told he’d been purged. Shabazz demanded a provisional ballot—but he knew that, by Georgia rules, his ballot would be tossed out, uncounted. But the nice ladies at the polling station did given Shabazz an “I VOTED” lapel sticker which is printed on a drawing of a peach, the state fruit.

And there’s the nasty little secret of American elections: not every vote gets counted. States report to the EAC that a 1,913,369 ballots were cast—then rejected.

The rejection rate for mail-in ballots zooms through the roof compared to in-precinct votes. How? One other voting rights attorney, Stacey Abrams, faced losing her own mail-in vote when the return envelope enclosed with the ballot was sealed shut by Georgia humidity. While Abrams knew she had to go through the process of getting a new envelope, others, who unlike Abrams may lack a Yale law degree, would assume they can mail in the ballot with their own envelope. Forgeddaboudit. Into the dumpster.

In Morgan County, GOP-dominated and just southeast of Atlanta, 20 votes on scanned ballot images of mail-in votes had not recorded. It appeared the votes did not register because ovals that were supposed to be filled in were instead checked or marked with X’s.

The scanners simply would not read the ballots, so a review of the mail-in ballots would locate other ballots uncounted. But the Republican majority on the county’s board of elections blocked the hand count.

Mail-in ballots lost in the mail; provisional ballots for voters purged without warning; absurdly, dangerously long lines and ballots simply rejected: This is not an exhaustive list of tricks the GOP will roll out in November, but the ones they chose to take for a test drive in this past months’ primaries.

Deadly long lines for Black voters and deadly cops that gun them down are really one story, the lesson I took from my talk with ACLU’s Andrea Young.

“Without voter suppression,” Young said, “Georgia’s electorate would support people who have very different positions than the people who are in control right now in the Capitol.”

You can’t take away an innocent man’s life unless you also take away his community’s means to do something about it: the vote.

And Georgia’s ruling regime is particularly adept at both: taking away rights as they take away lives as in the killing of Rashard Brooks.

Noting that she has “ancestors who were enslaved in Clark County, Georgia, in the 1820s,” Young said her family has, “for 200 years [been] fighting to make Black Lives Matter” in the state.

“Georgia,” she said, “only has these extreme, anti-Black, anti-woman, anti-LGBT policies because of voter suppression.”