Last week the Keystone pipeline cracked in South Dakota and dumped hundreds of thousands of gallons of the dirtiest tar sands oil onto a previously pristine prairie. Was the problem caused by a muzzled PIG?
Federal law requires pipelines, like the Keystone, to be regularly inspected to spot corrosion, failing welds, minor leaks, and other such issues before they can cause any problems. To do this, oil companies send PIGs – Pipeline Inspection Gauges through their pipes. However, the data they send back is only as good as the computer code used to analyze it, and three whistleblowers have told us that the software has deliberately been calibrated so the PIG doesn’t squeal.
The PIGs are honest, but the software isn’t. They’ve essentially muzzled the PIGs by making the diagnostic software less sensitive than required by government regulations. “It feeds them incorrect information about the state of their pipeline,” says one of our whistleblowers in our exclusive report, first broadcast today on The Thom Hartmann Program (see video above).
[Note: This information has been corroborated by two other whistleblowers, who were too scared to go on camera for fear of reprisals even with their faces in shadow and their voices disguised!] 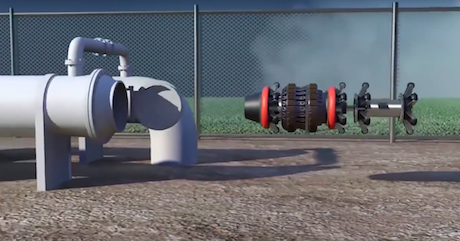 These silenced PIGs save Big Oil billions of dollars in repairs, maintenance, and pipeline down time. But the cost to the environment and human life can be high  and the combination of greedy corporate pigs and muzzled pipeline PIGs can be deadly.
“In the worst example,” our whistleblower tells us, “you could have a pipeline that has corrosion that goes into an urban area where there are many people that explodes.”
And that’s exactly what happened in 2010 in Northern California, when the San Bruno pipeline exploded, killing eight people.
*  *  *  *  *  *
[Prior to turning to investigative reporting, Palast directed the investigation of pipeline explosions for the Attorney General of Illinois and, as a private investigator for the Alaskan Native Corporations, the operation of the Alaska Pipeline and oil shipping system. ]
Greg Palast (Rolling Stone, Guardian, BBC) is the author of The New York Times bestsellers, The Best Democracy Money Can Buy and Billionaires & Ballot Bandits, out as major non-fiction movie: The Best Democracy Money Can Buy: The Case of the Stolen Election (the brand new, updated, post-election edition). Watch the movie and get the info on the Keystone Pipeline
Stay informed, get the signed DVD, a signed copy of the book companion or better still, get the Book & DVD combo.
Visit the Palast Investigative Fund store or simply make a tax-deductible contribution to keep our work alive! Alternatively, become a monthly contributor and automatically receive Palast’s new films and books when they’re released!
Or support the The Palast Investigative Fund (a project of The Sustainable Markets Foundation) by shopping with Amazon Smile. AmazonSmile will donate 0.5% of your purchases to the Palast Fund and you get a tax-deduction! More info.
Subscribe to Palast’s Newsletter. Follow Palast on Facebook and Twitter.
GregPalast.com