It seems a mystery. Why is Governor Brian Kemp of Georgia playing hide and seek with the Atlanta grand jury investigating whether Trump and associates attempted to tamper with the 2020 election results?

Why is the Governor resisting the subpoena? After all, the national press has played Kemp as some kind of hero for allegedly standing up to Trump, refusing to overturn Georgia’s majority for Joe Biden.

But Kemp is no hero. The reality: Kemp and his elections chief played games with Georgia’s voting process — for Trump and for their own political careers. They only refused Trump’s post-election demands they knew would have put them at risk of hard time on a chain gang.

There is still time to get your name in screen credits of my new film
Vigilante: Georgia’s Vote Suppression Hitman,
a screen credit donation includes a signed copy of the DVD on release.

And if you haven’t seen the 2-minute trailer, for gosh sake’s, watch it here.

Kemp’s resistance to testifying seems all the more odd because Fulton County (Atlanta) District Attorney Fani Willis has bent over backwards to accommodate the skittish pol. Because he was moaning about the time taken away from campaigning against Stacey Abrams, she agreed he could appear by video. And, surprisingly, Willis was going to let his attorney sit with him, something a grand jury witness is almost never permitted.

Kemp has gone crying to a judge pleading he shouldn’t have to answer questions about calls made to him by Trump and cronies. Kemp claims “sovereign immunity” — the right of kings not to answer questions, reserved in the US for official state actions. He claims “executive privilege” as if being CEO of Georgia is grounds to conceal evidence of a crime. He claims it would take time from his campaign — that’s one I’ve never heard in court. If that succeeds, we’ll have even more crooks run for office.

It’s always dangerous to speculate on what’s going on in Brian Kemp’s brain, but let me suggest that he knows his benign status as mere “witness” may quickly change to something far more serious.

If Trump, as reported, demanded the Governor call a special session of the legislature to de-certify Joe Biden’s victory, and Kemp told him to go fly, then Kemp’s off the hook. So, why not tell that to the grand jury?

Kemp reportedly told Trump that, as Governor, Kemp could not de-certify the presidential vote. Then was it Kemp who suggested Trump make those calls to the man who did have the power to reject the vote count?

Question: Governor, did you suggest that Trump call the Secretary of State?

Question: Governor, did you suggest to Mr. Trump that, while Georgia law does not allow you to interfere, you intended to change the law?

Question: Governor, you have yet to turn over all notes and information about the Trump de-certification campaign.  What happened to those records?

How could Kemp answer? Take the Fifth? Not wise for a sitting governor. Does he fudge it with, “I don’t recall”? Bad idea: Strategic forgetfulness is an indictable offence.

The most dangerous question would be whether Trump told him about, or asked for help with, sending a slate of fake Georgia “electors” to the Electoral College. That’s the highly technical core of the DA’s potential racketeering case against Giuliani and friends: submitting names of Electors who were never elected, who never even appeared on the ballot. Some Trump Electors, the official ones who ran on the November ballot, refused to have their names sent to Congress — so the Trump gang just manufactured a phony Elector list.

If Trump mentioned the scheme to create a fake set of Electors, and Kemp “forgot” to tell the DA, we could imagine Kemp listed as an unindicted co-conspirator. Not a winning campaign slogan: “Re-elect Kemp: Named but unindicted!”

As someone who’s been in federal court against Kemp (and beat his pants off), I’m familiar with his feints, sidesteps and head-fakes. He knows he’ll almost certainly have to speak to the grand jury, but he’s hoping to get a judge to hand him a gift: the questions in advance, so his lawyer can coach him with get-out-of-jail-free answers.

The danger to 2024 — Kemp decertifying the Presidential vote

While the DA is focused on Trump’s attempt to decertify the vote in 2020, I’m focused on the potential to overturn the election of 2024 — or even the count in his own race this November.

This became a very real possibility created by the new law he signed last year. SB202 takes away the power of Georgia’s Secretary of State to certify vote counts and gives it to a new Elections Board controlled by… Brian Kemp.

This gives the Governor the authority he lacked in 2020: to overrule ballot counts by local elections boards.

And Kemp has already begun to use his new, election-reversing authority. 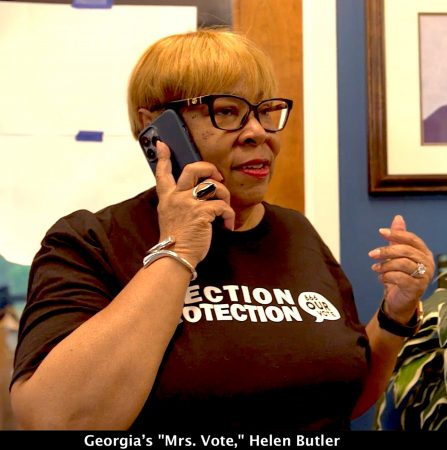 Helen Butler, known as “Mrs. Vote” in Georgia for her elections expertise, was until recently a member of the Morgan County Elections Board. She explained the danger of SB202 when I interviewed her in Atlanta for my new film:

“Trump said to the Secretary of State, find me 11,000 votes. So, the way it practically runs is that they put pressure on local boards. You need to have the members of the local boards of elections who will not certify the elections and say, I think we can disqualify this amount of votes. You’d have to have several counties that would be willing to do that.

“You’d have to have those local boards of elections that would be willing to not certify and to have the state not certify as well, because these counties are saying that there’s problems. Well, I’m not going to be a party to that.”

Well, that was Helen Butler’s mistake. One of Kemp’s first acts after signing SB202 was to use his new authority to remove Helen and nine others from local election boards.

Trial lawyer Gerald Griggs, President of the NAACP of Georgia, represented Helen and me in the federal suit against Kemp. We wanted Kemp to provide his secret correspondence on mass voter purges. Griggs believed Helen’s removal was retaliation for demanding, as the current DA has done, that Kemp open his files.

But Helen believes Kemp and Republican officials are on a campaign to remove recalcitrant local board members.

Moreover, under SB202, Kemp has the power to shut down any local board; then his own panel will determine whether to certify a vote.

This is no joke. The whacky, but very influential film, 2000 Mules claims that Trump lost the Presidency because hundreds of Black men stuffed ballot dropboxes in Fulton County.  If Kemp, who has publicly tried to regain Trump’s endorsement, buys this story, he can do in 2024 what he couldn’t do in 2020: Decertify the vote in Fulton (Atlanta) which would certainly hand Georgia to Trump or another GOP candidate.

After nine years investigating Kemp, I can assure you he did not give himself these powers without intending to use them.

But it all comes to naught if a grand jury concludes he went along with Trump until it got too hot in the vote-cooking kitchen.

And so, for good reason, the Governor of Georgia is, in legal terms, hiding under his desk.