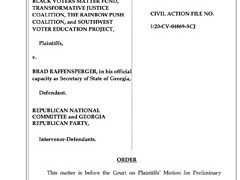 ATLANTA – Dec. 16. In his ruling in Black Voters Matter et al. v Raffensperger, Federal District Court Judge Steve Jones denied the Plaintiffs’ request for a preliminary injunction in the case, but strongly encouraged the Parties to meet to address what the Court acknowledged were discrepancies between Plaintiffs’ expert lists and the Secretary of State’s list. At issue are the close to 200,000 Georgians that Plaintiffs maintain have been improperly removed from the voter rolls for allegedly moving.

This lawsuit is based on the investigation by Greg Palast that the ACLU of Georgia released on September 1, 2020, entitled Georgia Voter Roll Purge Errors identifying, by name, over 198,000 voters wrongly removed.

“This a voter suppression case,” said Plaintiffs’ counsel C.K. Hoffler. “We alleged that close to 200,000 Georgians who properly registered to vote were illegally or improperly stricken from the rolls. We filed an injunction because of the injustice of having so many disenfranchised voters when faced with an upcoming runoff election. Plaintiffs believe that everyone who properly registered in the State of Georgia should be allowed to vote. Period.”

Hoffler is an Atlanta attorney who argued on behalf of Plaintiffs along with New York Attorney Jeanne Mirer at last Thursday’s federal hearing. Hoffler is Chair of Rainbow Push Coalition and President of the National Bar Association. 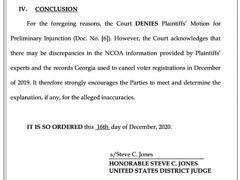 Plaintiffs’ Counsel Gerald Griggs of Atlanta added, “We understood by asking for an injunction that this was a heavy lift for the Court, but given what was at stake, the right to vote without suppression in the State of Georgia, the Plaintiffs moved forward. The Court did state that ‘Plaintiffs have shown that Georgia’s list maintenance process may not be accurate in identifying voters who have actually moved.’”

Griggs is a well-known civil and human rights attorney who along with his partner Maria Banjo worked tirelessly on this case.

Reverend Jesse Jackson, President and CEO of Rainbow Push Coalition, said, “The attorneys and plaintiffs have provided all the data evidencing improper voting purges to the Secretary of State, so if the Secretary of State does not address these discrepancies immediately, then he is engaging in intentional and deliberate voter suppression against Georgia voters.”

Southwest Voter Registration Education Project (SVREP) is also a Plaintiff in this case. SVREP President Lydia Camarillo reiterated, “The litigation continues as the Plaintiffs continue to fight for justice to allow Georgia voters who properly registered and did not move, to vote!”

SVREP reached out to over 26,000 Latino voters in Georgia upon discovering the improper voter purges.

President and Founder of Transformative Justice Coalition Barbara Arnwine testified at trial: “I’ve been an advocate of voter equality, civil rights and election protection for over 40 years as a lawyer. I have not seen this level of voter suppression in many years. It is simply a travesty. It is an honor for me to continue to fight on behalf of Georgia’s voters.”

Transformative Justice Coalition has sponsored ongoing votercades throughout Georgia and reached out to thousands of Georgians to ensure that they exercise their right to vote in the last election.

LaTosha Brown, co-founder of Black Voters Matter said, “We are glad we took on this fight. This case, based on the investigation of Greg Palast’s team and the September 2020 ACLU of Georgia report, exposed the massive continuing suppression of Georgians’ rights. We’ve already reached 98,000 endangered voters. We will continue our work to protect our voters in court — and at the polls. Our Bus is still rolling. The Secretary of State needs to do his job and let these people vote!”

“At the hearing, the Secretary of State’s office could not confirm whether the State used a licensed Post Office change-of-address list. In other words, they didn’t check with the Post Office to see if voters had moved, which is not only common sense but also required by federal law,” said Greg Palast, the journalist who led the investigation. 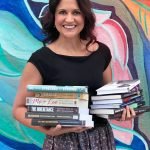 Julia Wouk-Brown, founder and president of Pleasantly Persistent PR, is a public relations expert with 14 years of industry experience. She started her career with a premiere Southern California agency known for its remarkable work with bestselling authors and little black book of top-notch media connections. As a well-connected and dedicated PR professional, Julia is passionate about ensuring her clients receive the media exposure they deserve to skyrocket their books into bestseller status. She resides in San Diego with her husband and her dog/personal assistant, Jack.