On Friday, Aug 25 Donald Trump pardoned Sheriff Joe Arpaio of Arizona
Here’s an excerpt from The Best Democracy Money Can Buy by Greg Palast about Sheriff Joe:
“There is a massive effort underway to register illegal aliens in this country!”
– Arizona State Senator Russell Pearce 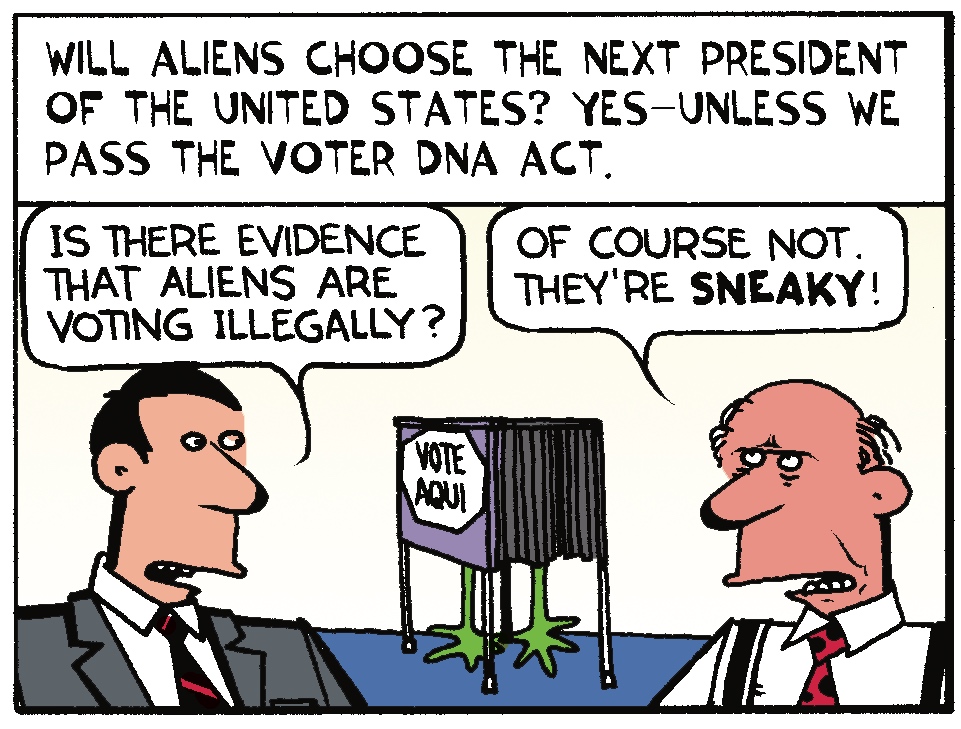 Art by Ted Rall, from The Best Democracy Money Can Buy by Greg Palast

The Arizona Republican hunt for “aliens” from Uranus to the Rio Grande has led to the removal of over 200,000 citizens, overwhelmingly Latino, from the state’s voter rolls. There’s more than an even chance that vote “suppression” – the polite word for racist, José Crow racial tactics – will result in the Democrats losing an open seat in the U.S. Senate where Democratic Hispanic Richard Carmona is pulling ahead of Republican Jeff Flake.
But I don’t think Carmona wants to win with illegal alien votes. After all, an alien voting has committed a crime– yet no one was arrested. Why? I flew out to Phoenix to investigate – and ended up in jail. That is, I visited the infamous tent prison of Sheriff Joe Arpaio who has led the alien hunt in his state.
But before I broke into Arpaio’s prison, I called his political ally, Arizona State Senator Russell Pearce, who sponsored one of the nation’s nastiest ID laws, Prop 200. It requires all new voting registrants to prove they are US citizens.
“How many illegal aliens have actually been registered?” I asked.
Pearce’s PR flak told me, five million. All Democrats too.
FIVE MILLION? WOW!! Our investigations team flew to Arizona to look for these hordes of voters swimming the Rio Grande – just so they could vote for Obama.
We wanted Pearce to give us their names and addresses so we could bust a bunch and get a Pulitzer Prize. It should be easy: their names and addresses are on their felonious registration forms. I’d happily make a citizen’s arrest of each one, on camera. But Pearce ducked us, literally hiding from our cameras. Turns out, he didn’t have five million names. He didn’t have five. He didn’t have one.
His five million alien voters came from a Republican website that extrapolated from the number of Mexicans in a border town who refused jury service because they were not citizens. Not one, in fact, had registered to vote: they had registered to drive. They had obtained licenses as required by the law.
The illegal voters, “wetback” welfare moms, and alien job-thieves are just GOP website wet-dreams, but their mythic PR power helps the party’s electoral hacks chop away at voter rolls and civil rights with little more than a whimper from the Democrats.
There are only four proofs of citizenship in the USA:

1. If you have your original birth certificate. Good luck with that, especially among the Hispanic poor who had home births and little access to such records.

2. A US passport. (Not many of the clerks working at Wal-Mart look like they’d just come back from their ski vacation in the Alps.)

3. Naturalization papers. If you become a citizen, you have documents that say so. The problem is that most Hispanic families in Arizona were citizens of the USA before there was a USA. They are natural, not naturalized, citizens, and so don’t have the papers.

4. White skin. In Arizona, according to the US Justice Department, the cops accept that white skin is a proof of citizenship. Maricopa County (Phoenix) Sheriff Joe Arpaio is on trial for having his cops stop citizens of brownish hue, demanding their citizenship papers and tossing them in the hooskow when they don’t.

I tested the white-skin-is-citizenship rule myself. I went to visit Arpaio’s famous (infamous?) open-air prison in the desert. You can see the sign, ILLEGAL ALIENS ARE PROHIBITED FROM VISITING ANYONE IN THIS JAIL ”“ SHERIFF JOE ARPAIO. What if he found out that Grandma Palast snuck infrom Windsor, Canada!

Not to worry: the sheriff ’s crew was happy to escort me and my investigations chief, Badpenny, around Tent City, and the deportee-sniffing professionals never asked for her citizenship papers. She doesn’t have them because she’s not a citizen. But she did remember to bring her white skin.
But hunting for illegal aliens isn’t the point. Arizona Hispanics vote two-to-one Democratic and if they were all allowed to register, the Republican sheriff and the state GOP would be toast. Or, I should say, tortillas.
And it’s darn effective. So far, not one illegal alien has been caught voting – but one in three registrations in Phoenix have been rejected.
Olé, Señor Rove!

But you can’t fool all of the voters all of the time. On November 21, 2011, Russell Pearce was re-called and removed from office by the voters of Arizona. Apparently, his José Crow tactics are alien to most citizens of the state.
Much of the work exposing Pearce and his racial trickery goes to Democracy for America.

***
Greg Palast (Rolling Stone, Guardian, BBC) is the author of The New York Times bestsellers, The Best Democracy Money Can Buy and Billionaires & Ballot Bandits, now out as major non-fiction movie.
Stay informed, download the new, #TrumpStoleIt, post-election edition of our hit film, The Best Democracy Money Can Buy, or get the signed DVD, a signed copy of the companion book – or better still, get the Book & DVD combo.
Visit the Palast Investigative Fund store or simply make a tax-deductible contribution to keep our work alive! Alternatively, become a monthly contributor and automatically receive Palast’s new films and books when they’re released!
Or support the The Palast Investigative Fund (a project of The Sustainable Markets Foundation) by shopping with Amazon Smile. AmazonSmile will donate 0.5% of your purchases to the Palast Fund and you get a tax-deduction! More info.
Subscribe to Palast’s Newsletter. Follow Palast on Facebook and Twitter.
GregPalast.com

Dropboxes could only be placed INSIDE county offices and early voting stations. This sabotages the purpose of dropboxes — providing access to those with jobs or obligations that require voting outside business hours.

Great work here. 👇 I always wondered why DOJ did not file suit over the Georgia law. It seemed as if it was laced with racial suppression. But, I assumed there wasn’t sufficient cause to do so.
Again, great work Moses & Palast. Ty. https://twitter.com/greg_palast/status/1597704695103254528