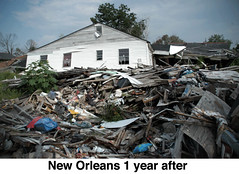 Monday, April 21, 2008
(For TomPaine.com)
(Listen to the Podcast here)
Psst! George Bush has a secret
While you Democrats are pounding each other to a pulp in Pennsylvania, the President has snuck back down to New Orleans for a meeting of the NAFTA Three: the Prime Minister of Canada and the President of Mexico.
You’re not supposed to know that – for two reasons:

First, the summit planned for the N.O. two years back was meant to showcase the rebuilt Big Easy, a monument to can-do Bush-o-nomics. Well, it is a monument to Bush’s leadership: The city still looks like Dresden 1946, with over half the original residents living in toxic trailers or wandering lost and broke in America.

The second reason Bush has kept this major summit a virtual secret is its real agenda – and the real agenda-makers. The names and faces of the guys who called the meeting must remain as far out of camera range as possible: The North American Competitiveness Council.
Never heard of The Council? Well, maybe you’ve heard of the counsellors: the chief executives of Wal-Mart, Chevron Oil, Lockheed-Martin and 27 other multinational masters of the corporate universe.
And why did the landlords of our continent order our presidents to a three-nation
pajama party? Their agenda is “harmonization.” 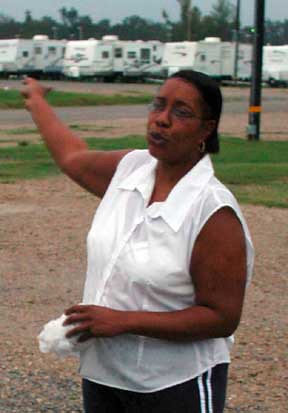 Harmonization has nothing to do with singing in fifths like Simon and Garfunkel.
Harmonization means making rules and regulations the same in all three countries. Or, more specifically, watering down rules – on health, safety, labor rights, oil drilling, polluting and so on – in other words, any regulations that get between The Council members and their profits.
Take for example, pesticides. Wal-Mart and agri-business don’t want to reduce the legal amount of poison allowed in what you eat. Solution: “harmonize” US and Canadian pesticide standards to Mexico’s.
Can they do that? Can Bush just say, “Eat your peas – even if they’re radioactive”? Under NAFTA, at least the way George Bush reads it (or has it read to him), he can.
When the three chiefs of state meet privately with the thirty corporate chiefs, they are also expected to erase a bit more of our borders. Technically, they will expand the “NAFTA Highway” – which is, in addition to lots of new blacktop, a set of regulations governing transcontinental shipment. Some fear NAFTA Highway expansion will allow a new flood of cheap Mexican products into the US and Canada. Not so. The Council’s hunger to widen the NAFTA highway is to bring in even cheaper Chinese goods.

As trade expert Maude Barlow explained to me, the new NAFTA Highway will allow Chinese stuff dumped into Mexico to be hauled northward as duty-free “Mexican” products. That’s one of the quiet aims of this “Summit for Security and Prosperity,” the official Orwellian name for this meet. Think of the SPP “harmonization” as the Trojan Taco of trade with China.
Barlow is Chairwoman of the Council of Canadians. She is known as the “Ralph Nader of Canada” (not Nader version 2.0, The Spoiler Candidate, but Nader 1.0, the consumer advocate). Because Americans are too distracted by the Punch-and-Judy primaries to complain about this lobby-fest on the bayou, Canadian Barlow is leading street protests against the SPP greed-grab.
I caught up with this courageous Canadian (I’ve seen her face down corporate bullying we can’t imagine in the US) on her way down to New Orleans. Barlow is especially horrified that the SPP agreement promotes a five-fold increase in the mining of Canadian tar sands for import, as liquid crude oil, into the USA, an idea filthier than a re-make of Debbie Does Dallas. “This is an insane model of development,” she says, especially given Bush’s recent claim that he wants to slow global warming.
Bush himself is pushing his Canadian and Mexican counterparts to adopt US-style “Homeland Security” measures so that, says Barlow, “we’ll all be zip-locked together in one security bag.”

There will be other anti-SPP protesters in New Orleans as well, from America’s populist Right. They are concerned that the Summit is worse than the “NAFTA on steroids” that Barlow fears. The populists see in the SPP a nascent “North American Union,” and the elimination of the good old US of A.

They’re wrong, of course. The USA was eliminated years ago, at least economically. The globalizers, the Competitiveness Council members, are a multinational crew, with one shared set of country clubs, beach homes, art collections, union busters and lobbyists knowing no borders.
The populist radio hosts railing against the coming North American Union don’t realize that these CEOs won’t take away our flags or Fourth of July or Star-Spangled Banner. The rags and flags will always be kept around to con the schmucks along the Yahoo Belt into donating their children to the Iraq Occupation or other misadventures. Likewise for Mexico’s rulers:  A billionaire like Carlos Slim, the richest man on the planet (sorry, Mr. Gates), didn’t buy the Mexican government to “protect” his nation from Gringos but to protect his media monopoly.  The corporation that purchases Canada’s leaders, Barrick Gold of Toronto, has looted treasuries from Tanzania to Nevada to Chile – and shared the spoils on both sides of the border with their well-greased advisors Brian Mulroney, former Prime Minister of Canada, and George Bush Sr., former head of the US CIA.
So there is no United States of America nor Canada nor Mexico – at least as we like to imagine ourselves in our national fairy tales: self-governing democracies run by we the people or nosotros el pueblo. There’s just the diktats of the North American Prosperity Council. Get used to it.
To underscore the fact that you aren’t invited, nor our elected representatives, Barlow related to me that the US Ambassador to Canada told her the legal changes wrought in New Orleans will not be put before the three national Congresses for a vote. “We don’t want to open up another NAFTA,” he told her. So, they’ll skip the voting stuff. Democracy is so, like, 20th Century.
Is Bush just a reluctant participant in this “harmonizing” of our economic fate? The meetings are secret, so I can’t say for sure. But I note that, at the opening ceremony, if you read his lips, you can see our president singing the national anthem as, “José, can you see?”
***********
Greg Palast is the author of the New York Times bestsellers, The Best Democracy Money Can Buy and Armed Madhouse: Sordid Secrets and Strange Tales of a White House Gone Wild. Sign up for Palast’s investigative reports for BBC on RSS feed at http://feeds.feedburner.com/gregpalast-articles
Make a donation to the not-for-profit Palast Investigative Fund and receive a DVD of the untold story of the drowning of New Orleans, Big Easy to Big Empty, made for Democracy Now! at http://www.PalastInvestigativeFund.org. Check out a clip from Big Easy below.

Note: On May 1, in New York, Palast will speak at the international conference of the victims of Barrick Gold mining operations. Information soon at www.GregPalast.com