5 July 2007
I remember John Perkins. He was a real jerk. A gold-plated, super-slick lying little butthole shill for corporate gangsters; a snake-oil salesman with a movie-star grin, shiny loafers, a crooked calculator and a tooled leather briefcase full of 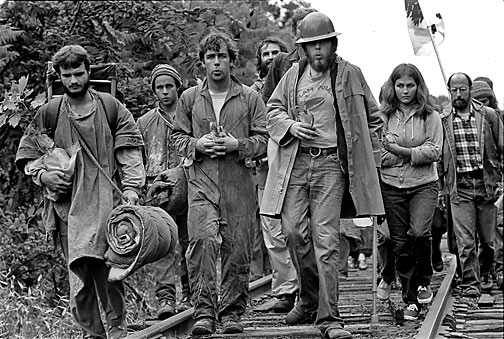 high-blown bullshit.
This was two decades ago. The early 1980s. I wore sandals, uncombed hair down to my cheap collar and carried a busted ring-binder filled with honest calculations and sincere analysis. It was Economic Hit Man Perkins vs. Economic Long-Hair Palast. I didn’t stand a chance. The EHM was about to put a political bullet hole through me wider than a silver dollar.
Hit Men have “clients.” Perkins’ was a giant power company, Public Service of New Hampshire. PSNH was trying to sell New England lobstermen and potato farmers on the idea that they desperately needed a multi-billion dollar nuclear plant. The fact that this bloated atomic water kettle, called “Seabrook,” would produce enough electricity for everyone in the Granite State to smelt iron didn’t matter. That the beast could add a surcharge to electric bills equal to home mortgages was simply smiled over by Perkins and his team of economic con artists.
To steal millions, you need a top team of armed robbers. But to steal billions, you need PhD’s with color charts and economic projections made of fairy dust and eye of newt. Perkins had it all – including a magical thing called a computer-generated spreadsheet (this was well before Excel).
I was an expert witness for some consumer groups, trying to explain to state officials that Perkins’ numbers were bogus as a bubble-gum bagel and his financial projections were from some New Hampshire on another planet.
But this was the key point: Perkins slept in a suite at the Omni. I had truck-rumble insomnia at the motel off exit 68. He glared and grinned and glad-handed. I tried to keep my eyes open.
Here’s how it ended. The local Joe’s jumped head-first into the Perkins fantasy and bought his client’s power plant boondoggle. Within a couple years, the local electric companies had all gone bankrupt, the state treasury was drained, electric bills went from lowest to highest in the nation causing factories to close and dump, I figure, about 11,000 jobs.
Perkins’ clients walked away with barrelfuls of billions.
And Dr. Perkins pocketed plenty for his mortal soul.
But, as in every moral tale, Perkins, the modern Dr. Faust, found redemption in confession.
And we’re lucky he did. Because, in Perkins’ confessionals, “Confessions of an Economic Hit Man,” and his latest, the just-released “Secret History of the American Empire,” we find out what makes these guys tick. By “these guys” I mean the vultures who suck up development aide, the sharks who use the World Bank as their enforcers, the corporate marauders, power pirates and hedge fund hogs with their snouts in the economic trough.
In “Secret History,” Perkins, from the inside, gives the details of the weird moral emptiness and pitilessness of men who waylay the riches of the planet from the people to whom it rightly belongs.
In New England, the pain imposed by the clients of the economic hit men were financial; but, as Perkins wants us never to forget, in much of the planet, the slick sales pitch of the economic hit man is enforced by squads of hit men with less subtle weaponry. Perkins writes:
“Three men toting AK-47s stood at attention outside. They saluted as we drove past. One of the three opened the front door opposite the driver. Leather Jacket and I climbed in. He spoke into a walkie talkie. Tinted windows made it impossible to see inside.”
In lines heavy with Hemingway, Perkins takes us to Indonesia, Bolivia, even tiny Diego Garcia and other victim-states where doctorate-armed “consultants” put an academic gloss on militarized plunder.
In the story of the guys with the AKs, Perkins is on assignment in Guatemala for an outfit called SWEC, a Bechtel twin trying to foist another mad power plant horror show on the natives of Guatemala. (About the same time, I convinced the state of New York to bring racketeering charges against SWEC and its partners in a massive power plant building fraud. SWEC and co-defendants settled the civil charges for a payment of nearly half a billion dollars.)
Unlike the yokels of New Hampshire who fell for the smooth Perkins line, the Guatemalans were no pushovers. Skeptical locals, suspicious indigenous shamans and a couple of improbably courageous politicians simply wouldn’t roll over to the corporate conquistadores.
The resisters, we are led to presume, will be dealt with accordingly. As Perkins explains it, if his pie-charts don’t make the sale, the little men in his darkened car know a little explosive wired to an ignition could be persuasive.
However, by time he got to Central America on the corporate assignment, Perkins was already ill at heart with the SWECs of this world. Ultimately, he refused to back their destructive scheme.
Perkins had switched sides – and, in “Confessions of an Economic Hit Man” gets his soul back from Satan only a little soiled. In Secret History, the personal confession turns into an illuminating, world-spanning jeremiad. From Latin America to Africa to the Middle East, Perkins leaps from his own story to the widespread misery caused by the greed armies sent marching from the boardrooms of New York and London.
Today, Perkins is my confrere and colleague. He wears his hair longish and I wear mine . . . well, I’ve stopped wearing hair altogether.
And in his writings today, Perkins heart goes out to the Third World targets of this new empire ruled by shock troops and spread sheets. His empathy extends to those in the occupied territory known as the USA. Because, says Perkins, when the wretchedly ripped-off of the Earth rise in rebellion, the lash of the backlash is felt by the children of the lobstermen of New Hampshire, shivering under Humvees in Falluja, and never the EHM’s clients’ fortunate sons, frolicking in their Ferraris.
***********
Greg Palast is the author of Armed Madhouse: From Baghdad to New Orleans – Sordid Secrets and Strange Tales of a White House Gone Wild.
To read an except from Perkins’ latest book, The Secret History of the American Empire, go here.